The story of the box turtle graveyard.

The setting is idyllic. The cold clear water of an Ozarkian spring bubbles forth from a cleft in the rocks. A luxuriant growth of moss carpets the forest floor, punctuated by the first dainty fronds of ferns beginning to unfurl. It is early April, and the surrounding oak-hickory forest has just begun to bud out. Tracks in the damp earth around the spring give evidence of passing gray foxes, and with warming temperatures, copperheads will frequent these haunts. It is a picture postcard scene, except for one macabre detail … the empty shells and skeletons of 60 or more box turtles scattered about. 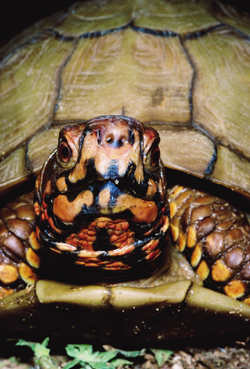 The author came to a live turtle, sitting quietly amongst the bones of deceased relatives. It retreated within its shell at his approach, drawing head and legs inside and sealing itself within by means of the hinged plastron.

Nature holds many great mysteries, seemingly unsolvable enigmas that range from the Loch Ness Monster to Bigfoot. They taunt us with intangible bits of information and evidence, begging for explanation, yet thriving on a lack thereof. There are people who have devoted their entire lives to unraveling such mysteries, millions of dollars are spent in the course of such efforts and the very existence of these unsolved mysteries trouble the minds of many. So, it is not without some apprehension that I reveal what may be the first published account of yet another grand enigma: the Box Turtles' Graveyard.

I heard of the spot second-hand from a zoologist friend, who came across the place one day while collecting snakes in the rolling Missouri hills. He sketched out a map as he spoke, his voice running with excitement over this biological peculiarity, like a treasure hunter recounting the discovery of the lost Dutchman mine. He drew an "X," pressing hard upon the pencil. "There is the Box Turtles' Graveyard."

Had I not known the man better, I would have thought his tale was the product of too much Stanley and Livingstone reading and an overactive imagination. But this was no dusty Darwinian gold panner I was speaking to. He was a curator of a well-known zoo, a former conservation officer and a college-trained biologist. I set out in search of this almost mythical spring, not knowing I could even find it if it did exist. The map was rough at best, the twisting Ozark roads deceptively similar, and a low distant rumble of thunder rolled in ahead of an April storm. Finally, I pulled off the road and struck off into the woods following the trickle of a tiny brook.

I had walked probably a quarter of a mile, pausing to gather up the errant feather of a blue jay that lay upon the glowing green mosses, when I came upon the spring. It was just as it had been described to me, a tiny clearing in the forest where the waters came up, a thick blanket of moss spongy beneath my step, the rocks encrusted with pale gray-green lichens. And everywhere, the skeletal remains of dozens of box turtles.

I moved about the area carefully, stepping lightly, stooping to inspect the empty carapaces and tiny bones. All appeared to be deceased adults, their shells 4 to 5 inches long. Of some, only the bleached white shells remained, while on others the colored chitinous layers still adhered, revealing a later demise. The reptiles did not appear to have perished at once. Tiny brown ants ran frantically about on the decaying tissues of one terrapin's legs, while the individual plates of other turtle shells lay strewn about like pieces of a geometric puzzle or the blocks of a dismantled igloo.

Then I came to a live turtle, sitting quietly amongst the bones of deceased relatives. It retreated within its shell at my approach, drawing head and legs inside and sealing itself within by means of the hinged plastron. I found two other living individuals who tolerated my intrusions with exquisite reptilian patience, alive but as inactive as their dead compeers.

I sank down upon a rock and took some notes, trying to rationalize the bizarre congregation. There was no natural trap here to doom the reptiles as I had seen before in sink holes and abandoned wells. The water was fresh and sweet, although insufficient to sustain fish, it teemed with insect larvae and I found a lone salamander beneath a rock. Judging by the various stages of decay, as well as the still living individuals, it was apparent that the creatures had arrived here and perished over a number of years.

Perhaps, I thought, they had come here suffering from some unknown turtle ailment, seeking relief. Maybe these waters contained a medicinal mineral that the reptiles sought out, too late for most. But to assume that such a creature is capable of the realization of the curative properties of a certain spring is dubious.

I considered the possibility of some poisonous form of fungi upon which passing turtles had chanced to feed and then perished of, but I found no mushrooms of special note in the area. The specter of toxic waste occurred to me, but no, not here in the middle of this relatively unspoiled area.

The low grumbling of thunder now broke into an earth-shaking clap that shattered my thoughts and heralded the first big drops of rain. I got up and surveyed the graveyard one last time, the dim amber eyes of the three living turtles peering suspiciously out of their fortifications. An unnerving feeling curbed my urge to take one of the empty shells with me as I usually did upon finding remains in the woods. I did not wish to be seen as a grave robber in the eyes of the turtles still alive there, or perhaps it was just the solemn, respectful atmosphere of the place, so akin to that of our own cemeteries.

I made it back to my car moments before the deluge and continued home to Kansas. Although the mystery of the Box Turtles' Graveyard kept my mind groping for explanations, I never searched any further for clues. Some things, after all, just are. Should I ever find out why so many turtles had come there to die, the romance of the story would be lost forever.

The map to the box turtles' resting place vanished into the cluttered debris on the floorboards of my old Chevy, and the mystery seemed complete. I am tempted to test my memory and once again search out the Box Turtles' Graveyard, just to see how many more have come to pass amongst the bones of kith and kin. But to try and explain the phenomenon would seem almost sacrilegious to me now. Enigmas seem always to shed their mystery ungracefully, explained as awkward and ungainly natural functions. A clinical knowledge of light diffraction does little to enhance a rainbow. As the ancient reptiles rest, I will let the turtles rest, their deaths unexplained.

As I reflect now upon the phenomenon, I feel a sad peacefulness. There is something touching in this fatal congregating that I finally recognize as my attributing a common human fear to the motives of the turtles … the fear and tragic inevitability of dying alone.