A herpkeeper finds a blind snake an eye-opening captive.

Despite blind snakes’ abundance (more than 300 species) and diversity, they are real strangers to herpetoculture. Depending on your references, there are three families of blind snakes: the Typhlopidae, Leptotyphlopidae and Anomalepidae. 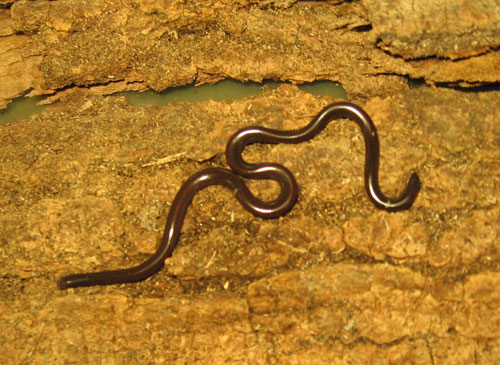 The blind snake, Ramphotyphlops braminus, can easily be confused with a worm by an unknowing person..

Anomalepids are found in the New World tropics. The family only contains 15 species, and it is sometimes not even considered included with the other two families because anomalepids completely lack pelvic girdles. Another characteristic used to separate blind snake species is the scalation on top of their heads.

The smallest snake in the world is a blind snake. Larger species can grow to a length of 39 inches, which is huge by blind snake standards. These snakes have many interesting features. They may have teeth on only the lower or upper jaw, they shed their skin in rings, and in some cases their tails are wider than they are long. Blind snakes secrete repellent chemicals and sometimes dissect their prey before eating it. They can climb trees and sometimes seem to guard their eggs, and they are found on all warm to temperate continents. Existing in many different colors, blind snakes also may not have eyes or a visible iris, may have cloacal spurs, and may have a solid or speckled pattern. 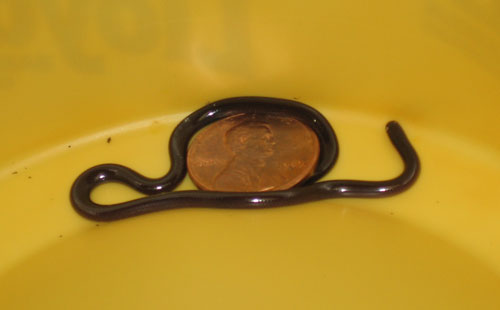 Yet I recall one book that described them as “the least interesting reptile pet.” Most likely this was based on their generally small size and propensity to remain hidden if given a substrate in the tank.

Recently I was able to work with a 6-inch-long adult Brahminy blind snake (Ramphotyphlops braminus) and discovered it to be extremely interesting. Having never even seen a live blind snake before, this was a fantastic opportunity for me to learn about a large group of snakes (they account for about 10 percent of the total number of species worldwide) that some herpkeepers do not even know about.

Brahminy blind snakes are also called “flowerpot snakes,” which is a reference to their ability to disperse throughout the world hidden in the soil of flowerpots. It is thought that large pots used in commercial agriculture have transported this Asian native to Africa, India, Sri Lanka, many Pacific islands, Southeast Asia, Australia, Mexico and the United States. The snakes can be found in Florida, Texas and Hawaii, but Hawaii’s Chamber of Commerce says snakes aren’t in the state.

I found this blind snake at a reptile show. It was hidden away beneath deli cups containing better-known species. Peering into its clear cup, I observed slightly moist garden dirt. The gentlemen at the booth assured me that there was indeed something in the cup, and he gave permission to pop the lid and search for it. I eventually found a wriggling blackish creature measuring 6 inches long with the diameter of a coat hanger wire. Its belly was purplish, and there seemed to be lighter areas at the front — what I thought was the front anyway — and back of the serpent. The cup’s label identified it as a “round smooth snake,” and that it was.

Drawing on my meager past blind-snake education, I remembered these snakes generally eat termites, ant larvae and ant pupae. Being an outdoorsman (I just retired after 30 years as a park naturalist), I figured getting these feeders wouldn’t be too tough. I immediately made a deal for the “round smooth snake,” and it set me back much less than any other snake purchase I had ever made.

At home, I put the deli cup in the herp room and began to research. I was able to confirm my original information on small blind snake feeding habits. In addition to the previously mentioned insects, beetles, small earthworms and even caterpillar feces have been recorded as food for the flowerpot snake. Other blind snake species’ stomachs have been found to contain all these insects and also spiders, fly larvae, moth larvae, crickets, millipedes and centipedes. 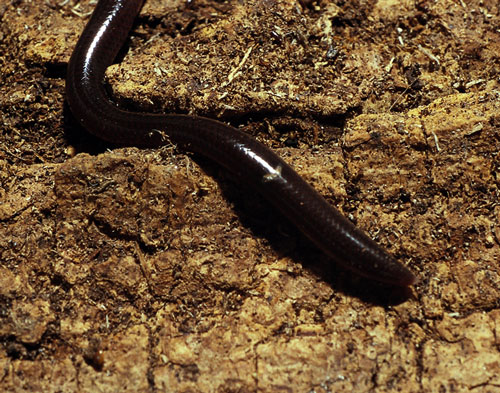 This photo shows the posterior of the blind snake.

For some strange reason my wife seemed adverse to termites, so I concentrated on ants. At least one source on the Internet mentioned some success feeding blind snakes rehydrated ant pupae commercially available as finch food. I hoped to avoid ordering these pupae because they cost a couple times the price of the snake, but after spending a day in search of ants during an Ohio winter, I decided an order might not be such a bad deal after all.

I did find two ant colonies, one with very tiny larvae, during my winter search, so I placed it in the deli cup hoping it would suffice until the pupae arrived. I also sought an entomologist’s advice at a nearby zoo as to likely places to search for ant colonies in the winter.

The tiny ant colony I found seemed to disappear over several days. By then I had begun placing the rehydrated ant pupae in the deli cup, and I thought some also disappeared. Sometimes I dusted the insects with reptile vitamins, and occasionally added fruit fly larvae into the variety of food offerings. I never saw the snake eat.

Aboveground and Into Larger Housing

Initially the Brahminy blind snake spent its time under the soil. I placed a paper towel over the cup and the snake began showing up on top of the soil. I found the blind snake in a number of strange postures, including one with the snake’s belly or part of its belly facing up. This didn’t look as odd as you might expect because blind snakes’ ventral scales are similar to their dorsal scales. The snakes don’t have wide ventrals. 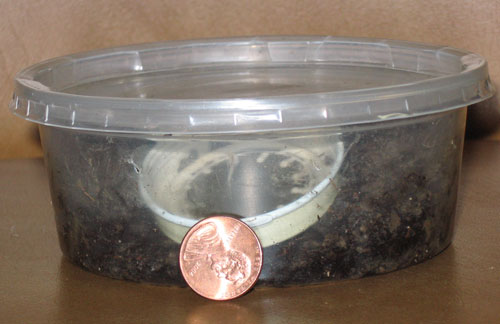 This is the original container that the author brought the blind snake home in.

Initially the snake looked like a tiny worm, but I discovered that it crawled with the usual snake motion, a straight-line movement like a heavy-bodied boid. Although this motion looked similar, it was probably the result of the blind snake pushing the forepart of its body along with its tail, which is tipped by a tiny harmless spine. I expected the spine to be used in defense when the snake was handled, but more often it seemed that the snake tightly pushed its head against my finger when I tried to position it for photography. Its mouth didn’t seem to be open, but its lower jaw is countersunk, and with the small head size it was difficult to tell. 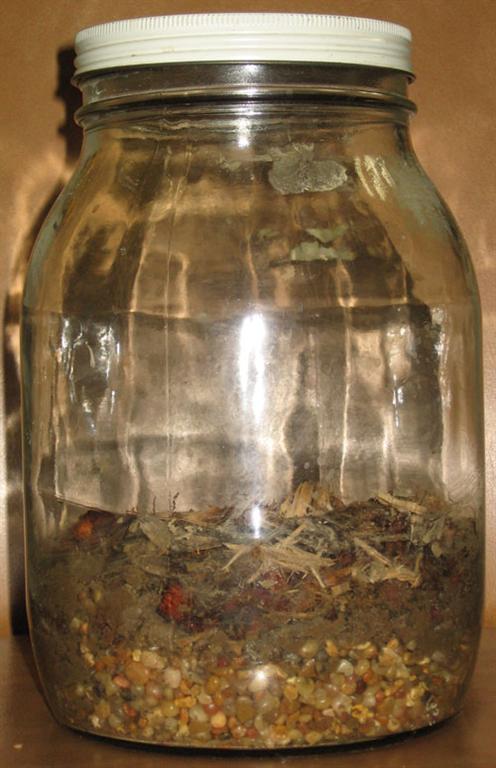 The author set up a gallon jar with layers of gravel, soil, and a mixture of mulch and wood chips for the blind snake.

I set up a gallon jar with layers of gravel, soil, and a mixture of mulch and wood chips. I filled water to about halfway up the jar’s bottom gravel layer to maintain a moist habitat without soaking the soil. The soil was kept damp, but I attempted to maintain at least some dry area on the surface.

I eventually placed a 7-watt incandescent bulb next to one side of the jar bottom to provide a slight temperature gradient. Because Ramphotyphlops braminus is a tropical species but lives in the soil where it is cooler, I wasn’t sure how much heat was necessary. Some blind snakes seem to bask at least occasionally. Room temperature was approximately 75 to 80 degrees Fahrenheit, and a Helix proportional thermostat with day-night temperature settings maintained it. The incandescent bulb allowed me to raise the temperature of the side of the jar by a couple degrees. The jar lid had a large hole cut in it with metal screening, and I used a small lid as a water bowl.

Ramphotyphlops braminus is a parthenogenic species. All are thought to be females that reproduce without mating. Some references suggest that up to seven rice-sized eggs are laid, but others consider the flowerpot snake to be either live-bearing or egg-laying (with a very short incubation) depending upon circumstances.

My tiny blind snake surprised me by being at least partly visible on the substrate surface pretty much every day. About a half-dozen rehydrated ant pupae or fruit fly larvae were placed along the edge of a wood chip on the substrate every two or three days.

I had heard that some blind snake species actually fluoresce under black light. I gave an incandescent black light a try, but I couldn’t get any fluorescence from my snake’s skin. Perhaps the light did not give off enough ultraviolet light.

After about a month, the blind snake was unfortunately found dead. I had never actually observed it eating, so perhaps a lack of food was the problem, yet John and Roxanne Rossi have suggested that western blind snakes (Leptotyphlops humilis) and Texas blind snakes (L. dulcis) should be fed 20 ant pupae or termites every one to two weeks during the warm part of the year. They have also successfully kept L. humilis for close to a year. The snake also could have died from a fungal infection from a substrate kept too moist, but the snake didn’t show external signs of infection, and dry areas were available in its enclosure.

Assuming that the rehydrated ant pupae and/or fruit fly larvae, supplemented with occasional live ant pupae and larvae, work as a long-term food, Brahminy blind snake care may very well be uneventful, making it a great candidate for a very unusual reptile pet. Its ability to colonize new areas certainly suggests hardiness. Hopefully I will have another opportunity to work with these fascinating snakes.