Just as their North American rat snake cousins are considered easy to breed in captivity, so are Asian beauty snakes (Orthriophis ssp). To do so requires a simple, three part recipe: feed them well, keep them hot (usually) and keep them humid.

To successfully breed any of the nine beauty snake subspecies, females must be fed well and often. In fact, do not be surprised if a male suddenly becomes a finicky eater, which has been observed in mature male beauty snakes, especially during breeding season. Beauty snake eggs are relatively large, and they have thick, leathery shells (the exception is the cave-dwelling beauty snake, which lays smaller eggs with softer shells). To produce them is a taxing effort, so the female needs an ample food supply to maintain strength.

The Chinese (Orthriophis taeniurus taeniurus), Yunnan (O. t. yunnanensis) and Mocquard’s (O. t. mocquardi) beauty snakes, because they inhabit central China, generally between 30 and 40 degrees north latitude, do well with a cooling period prior to breeding, when they may be kept at about 60 to 65 degrees Fahrenheit. They should not be fed during the cool-down period, which should last from October to December, with ambient temps being raised back up to 85 to 88 degrees in January. (The blue [O. t. callicyanous)], Taiwan [O. t. friesi] and cave-dwelling [O. t. ridleyi] beauty snakes do not require a cooling period prior to the mating season.) 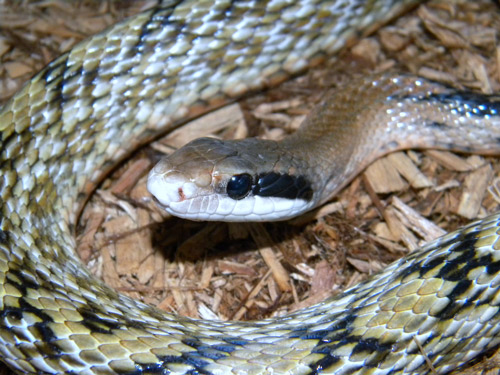 Of all the beauty snakes in the hobby, the Yunnan beauty snake is presently the most difficult to find. Photo by Ian Jessup.

As cooled snakes are brought back to their normal temperatures and normal feeding has resumed, it is time to crank up the humidity. This is most easily accomplished with heavy misting of the enclosure several times daily. Don’t be shy about the misting, it needs to be almost sopping wet inside the terrarium at this stage. As long as there is plenty of ventilation, the flood lamps (two, each inside a dome fixture on top of the enclosure; 60-watt lamps for smaller subspecies; 75-watt lamps for larger) will work to evaporate the excess moisture inside the enclosure and generate some impressive ambient humidity. It is when the humidity reaches 100 percent following a heavy misting that I have observed the most courtship and copulation taking place among my beauty snakes.

Beauty snake courtship begins with the typical pursuit of the female by the male. The male will follow her around the cage, making jerking motions along the length of her body, for several minutes up to a couple of hours. The female may or may not jerk her body in response. If she’s receptive, she’ll lift her tail and the male will wrap his tail around hers until their vents are aligned, and mating will occur. It can last for hours; I’ve personally witnessed some of my beauty snakes engaged in copulation anywhere from four to eight hours. Both snakes will move very little, if at all, for the duration.

Males will sometimes attempt to restrain a female with a “copulatory bite,” although I have never personally witnessed this behavior in any of my beauty snakes. If you find your snakes thrashing around the terrarium violently, I can promise you one thing: you do not have a male/female pair. Active thrashing and intertwining of two beauty snakes is territorial combat behavior seen in males. It isn’t physically dangerous to either snake (as long as the cage furnishings are secure), but it may result in the loser becoming overly stressed, which could become a problem later. The goal of both males during such combat is to pin the rival male’s head to the ground. When a chin touches the ground, the fight is over and the loser needs to leave.

A humid hide that is large enough for the female to enter and comfortably coil her entire body should be provided. This could be a plastic sweaterbox with a lid, filled with sphagnum moss and a hole cut into the lid. The moss should be just wet enough to allow a few drops of water to be squeezed out. Monitor this hide closely and mist it daily to maintain humidity. Eggs are typically deposited in the humid hide about 55 to 70 days after a successful mating, with a gravid female undergoing a pre-egg-laying shed about a week (sometimes two) before egg deposition.

Beauty snakes have been observed exhibiting post-egg-laying maternal behavior toward their eggs, similar to large pythons. It is possible that you will open the humid hide to find the female tightly coiled around 10 to 15 eggs (or up to 25 for larger subspecies). If ever there is a time when you can expect to be bitten by a beauty snake, while taking eggs from a female is going to be that time. Removing the eggs will require some patience and tenacity, as you will have to slowly and carefully unravel the female from around her clutch before removing the eggs for incubation. You don’t have to worry about keeping them in the same position as they were laid, and not turning them over. Just be careful not to squeeze or rupture the eggs while removing them from the humid hide. There is a chance that the female will lay the eggs and abandon them after a resting period. If that’s the case with yours, consider yourself lucky.

After removal from the humid hide eggs can be placed in a shoebox-sized plastic container with a lid, which itself is placed into an incubator. To allow ventilation, holes should be punched along the length of the egg container on both sides, spaced about an inch or two apart. I incubate beauty snake eggs on moistened sphagnum moss, using the same guidelines as previously described for the humid hide. Care should be taken to ensure that the moss under the eggs doesn’t become too wet, or it may result in hatchlings dying inside the egg before they hatch. During the first week of incubation a filamentous mold may appear on the moss. This is perfectly normal, and it should disappear quickly.

Some of my fellow beauty snake breeders incubate their eggs using plastic egg crating (available in hardware stores) and perlite. Perlite is placed in the bottom of the egg container and water is added to achieve a 50:50 water/perlite ratio. The egg crate is placed on top of the incubation medium, and the eggs are placed on top of the egg crate, where they are left to incubate. This method is referred to as the “dry incubation” method because the eggs never come into contact with the incubation medium.

I maintain ambient humidity at 100 percent while incubating the eggs at 78 to 80 degrees Fahrenheit. At these temperatures, beauty snake eggs typically hatch 55 to 80 days after deposition, although they can conceivably take as long as 88 days to hatch.

When the hatchlings begin to pip the eggs, monitor them to make certain that they are all pipping at about the same time. If you have any stragglers that don’t pip within 72 hours of the first egg pipping, manually pip the egg by cutting the shell very carefully with a razor blade. I do not recommend performing manual pipping if you are impatient for the first eggs to pip; let them do so naturally, and only manually pip stragglers afterward. As they say, all good things come to those who wait.

After the hatchling beauty snakes have fully emerged from their eggs, leave them inside the egg container for a solid 24 hours. This will allow them to stabilize after absorbing their yolks. After 24 hours they can be removed and temporarily placed into individual shoebox-sized containers lined with paper towel, one hatchling per container. Paper towel makes cleaning easy and feeding a no-hassle affair, as you certainly don’t want your baby beauties accidentally ingesting any substrate.

Offer hatchlings their first meal after they have shed their first skin. This may occur up to a week or so after hatching. Maintain the humidity in their temporary container at around 80 percent and at about 85 degrees Fahrenheit. Move them into their permanent enclosures only when they are eating and shedding normally. Problematic feeders can often be enticed into eating frozen/thawed pinky mice; leave them sitting on the counter to thaw just long enough for them to take on that “meat just gone slightly bad” smell prior to offering them to your baby beauties.

Want to read the full story? Pick up the June 2011 issue of REPTILES, or subscribe to get 12 months of articles just like this.