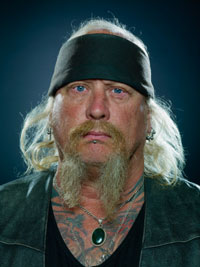 Why do some people still think reptile fans are weird?

When considering reptile hobbyists, what adjectives do you think come to the minds of people who aren’t into reptiles? I suspect such people might think of the word “weird,” and maybe sometimes “heavily tattooed.”

Would you agree that in today’s enlightened world a bit of a stigma is still attached to us because of our reptile interests? Even though there are more reptile hobbyists today than ever (as verified by pet industry surveys, most notably the American Pet Products Association survey), I think many people still look at reptile owners as members of the fringe element. Aside from being the name of an intriguing television show, the term “fringe” is not exactly complimentary.

When I’ve attended publishing functions in the past, and I’m asked what magazine I work on, when I say REPTILES magazine, the reaction is sometimes one of disbelief. It reminds me of an MTV news report that mentioned the magazine years ago, after Slash was interviewed in our February 1994 issue. Kurt Loder, then a news anchor for MTV’s “The Week in Rock,” mentioned the magazine’s title, and then said, “Yes, there is such a thing.” Thanks Kurt! Oh well, I was still happy to see REPTILES magazine and the article get some air time despite Loder’s snarky comment.

Why do you think many people think reptile hobbyists are odd? Could fear play a role? I suppose because many people are afraid, and sometimes deathly afraid, of snakes – did you see my last blog about the woman on Cops? – they figure that anybody who actually likes them and keeps them, and maybe even breeds them…well, they must think such people are nuts, and maybe even outlaws and renegades.

Is it the tattoo thing? Some people are intimidated by tattoos, but even so I don’t think there are more tattooed people than people without tattoos who like reptiles. I guess I’ve fueled the “reptile fans have tattoos” cliché by holding several REPTILES Tat Attack! contests in REPTILES magazine. Personally, I think tattoos can be admirable works of art. I don’t have one, but sometimes think about getting a dia de los muertos-style skull tattoo. Maybe someday I will take the plunge. In some ways, tattoo fans and fans of reptiles are both looked upon with the same critical eye of people who think both groups are rather strange, even though both are more accepted than they used to be.

Despite what some people may think, if you have visited a reptile expo recently you can attest to the fact that a very broad cross section of humanity can be found wandering expo aisles. There are always many kids in evidence, along with their parents. It seems to me there are increasing numbers of women at reptile expos. Anyone else think this? And not just women customers, I think there are more women vendors, too. No matter how you slice it, the people who enjoy reptiles represent a real melting pot, and that’s a great thing.

I find it irritating when people write off reptile hobbyists as weirdos. I don’t like that, and I think such a mindset helps to encourage the anti-reptilekeeping crowd to push legislation that will curtail, or kill, the reptilekeeping hobby.

Do what you can to illustrate how varied the reptile-loving sector is. Maybe you could set up your own websites that focus on your pet reptiles. Demonstrate your reptile interest publicly. I’m not suggesting you parade your pet reptiles around in an irresponsible fashion; you could show your interest by attending expos and visiting reptile-oriented attractions. Volunteer to give reptile presentations at schools and fairs. If you’re a signed-up fan of the REPTILES or ReptileChannel Facebook pages, for instance, you can get your name and face out there as if to say to the Internet world, “Heck, yeah, I love reptiles!”

If we represent the reptile hobby in a positive light, reptilekeeping will continue to be accepted further into the mainstream. And with such acceptance one can hope that fewer attacks on our hobby will result. So here’s hoping!