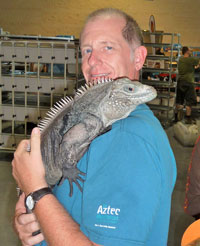 Scenes from the National Reptile Breeders Expo in Daytona.

Last weekend I once again braved the humidity of Florida (I live in California so I’m a humidity wimp) for the 2010 National Reptile Breeders Expo in Daytona Beach, often referred to as the granddaddy of the reptile shows. Despite the growing number of reptile shows in the U.S., Wayne Hill’s Daytona show still remains the biggest. It’s definitely the place for reptile hobbyists to hobnob with many of the nation’s top reptile breeders and to peruse their latest animal offerings. Sore feet are guaranteed by the end of the day!

The show is well known, but did you know that there are also a number of lecture symposiums held the night before the show starts? On that Friday night for the past I-don’t-know-how-many years, talks covering an interesting spectrum of herpetological topics, sponsored by a variety of reptile-related companies, are offered for the enjoyment of all. This year there were three symposiums covering turtles, chameleons and Morelia pythons.

Zoo Med always sponsors the popular Turtle Night talks, featuring turtle and tortoise experts discussing all things chelonian. Among the speakers this year was noted chelonian expert Dr. Peter Pritchard, who was there to talk about the Galapagos Islands. I always enjoy his talks, and I enjoyed this one, too. He spoke about tortoises on Volcan Wolf (the highest peak in the Galapagos Island chain) on Isabela Island. Other Turtle Night speakers in addition to Dr. Pritchard were Jerry Fife, who talked about star tortoises; Torsten Blanck, who talked about Asian turtle farms; and Charlie Green, whose talk was titled, “Using Turtles as a Teaching Tool.”

This year was the debut year of the Exo Terra Chameleon Symposium, and I must say I was quite impressed. If this initial effort is any indication, future sessions will be something to look forward to. Emmanuel Van Heygen arranged a great lineup of chameleon speakers, including Jim Nozaki from Amazing Blue Reptiles, who spoke about panther chameleons, and Petr Necas from the Czech Republic, who spoke about identifying new species of chameleons, and differentiating them from existing species. Other speakers included Chris Anderson and, all the way from Germany, Wolfgang Schmidt and Friedrich Wilhelm Henkel. The turnout was impressive, and I imagine chameleon enthusiasts will be adding this event to their agendas from now on.

Unfortunately, I must confess I did not get an opportunity to sit in on the Morelia talks that were sponsored by The Gourmet Rodent and Timberline. It was impossible to attend all the talks because the three symposiums were all held at the same time. I was bouncing back and forth between the turtle and chameleons sessions, in addition to visiting with participants and tending to REPTILES/ReptileChannel-specific chores, so I’m sorry to say I never got into the room where the python talks were held. Nevertheless, I’m sure the attendees I saw entering throughout the night were not disappointed.

In addition to a huge show floor full of reptile vendors, and the talks described above, the NRBE also features a benefit auction on Saturday night, with a pre-auction reception sponsored by REPTILES magazine (free food! no-host bar!). The money raised from this annual event typically goes to a herpetological conservation program of some kind. This year, the auction money went to USARK, which is entirely appropriate in light of increasing legislative efforts that attempt to restrict the trade in pet reptiles. Zoo Med owner and USARK Chairman of the Board Gary Bagnall, too, continued his pledge to match USARK donations. The Saturday night auction resulted in $40,000 for USARK! In addition, USARK received other donations over the weekend, including more than $1,500 raised at a raffle held during the annual Daytona Cornsnake Gathering and Dinner, as well as additional money from visitors to the USARK booth during the show. Altogether, USARK received $46,000 dollars last weekend – BOO-YAH! Thanks to everyone who helped raise this money, and, of course, the actual donors themselves!

I could go on writing, but why bother when you can look at a bunch of photos I took at all these events? Check out the Daytona slideshow below for photos from the show, the Friday night talks and auction night. Next up for me, show-wise, is the National Amphibian and Reptile Conference and Trade Show (NARBC) in Anaheim, Calif., on September 11 and 12. Maybe I’ll see some of you there. If Anaheim is too much of a schlep for you to travel, check our comprehensive listing of reptile events for a show near you!