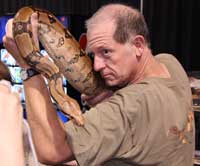 Last weekend the Anaheim NARBC saw a steady flow of vendors and reptile hobbyists – even Leonardo DiCaprio – in and around the Anaheim Convention Center.

I was there with my posse (as one co-worker put it): REPTILES’ Managing Editor Stephanie Starr, Associate Editor Carrie Brenner and National Sales Manager Sandy Quinn. Ben Weiner, Associate Web Editor on ReptileChannel was with us, too, taking photos aplenty, many of which can be seen in the slideshow below. Joining us all for the first time were two BowTie employees – Marketing Associate Jennifer Ketchersid and Online Advertising Specialist Emily Gaitan – who are both involved with REPTILES magazine and ReptileChannel, in addition to other Bowtie magazines/websites. Jen and Emily had never been to a reptile show, so I thought it would be a good experience for them to come check out one of the busiest local shows. They ended up having a great time, too, and there may be turtles in both their futures!

This show has grown a lot over the years. Show organizer Bob Ashley told me there were 35 more vendors there this year than last year. Foot traffic was impressive, and seemed to increase steadily as the day progressed. Let’s hope plenty of vendors made plenty of sales! Attendees also had the opportunity to sit in on a number of free reptile presentations that were given right there on the show floor. I was at the show on Saturday, and that day the presentations were courtesy of Bob Applegate (herping in Africa), Brian Barczyk (maintaining large snake collections), Steve Angeli (beaded lizards) and Don Schultz from Animal Planet’s Wild Recon. On Sunday there were more: Philippe de Vosjoli (horned frogs), Drew Rheinhardt (tortoises) and the return of Don Schultz.

Sunday was also the day Leonardo DiCaprio was spotted at the show. He purchased a sulcata tortoise from Prehistoric Pets. I seem to remember hearing in the past that he owned bearded dragons, too, but don’t hold me to that. TMZ.com reported on Leo’s sulcata purchase, and news about it was plastered all over the Internet. Personally, I think it never hurts to spread the news when a celebrity turns out to be into reptiles, especially one as popular as DiCaprio. I think someone should make a movie about the life of pioneering herpetologist Raymond Ditmars. Maybe Leo could star in it. He played Howard Hughes, so why not Ditmars? It would be guaranteed Oscar bait!

An auction on Saturday night raised $10,475, which will be split between USARK and PIJAC. That’s great, and more money to battle evil anti-reptilekeeping legislation is always welcome! Lots of cool stuff was auctioned off, including many live animals. Personally, I regret not bidding on a cool tomato frog print that was on the block. I was going to, then got distracted and away it went. ReptileChannel donated five packages of free online classifieds ads. And by the way, be sure to check out our brand-new classified ads section!

There was no shortage of cool reptiles on the vendor tables, that’s for sure.