Tropical treefrogs are not particularly challenging to breed, but Amazon milk frogs (Trachycephalus resinifictrix) are often considered among the most difficult. Select mature adult Amazon milk frogs, at least a year old, and a single male and single female should be chosen and fed well for the preceding few months before breeding. 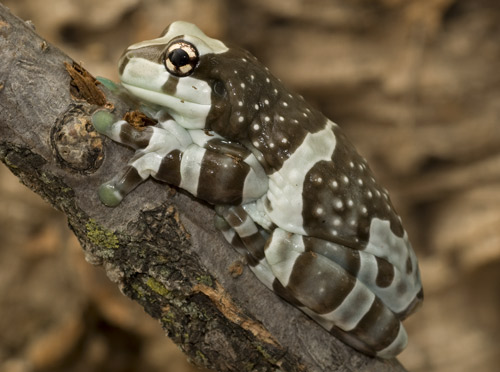 Tropical rain forests undergo relatively little seasonal change, but there is a general season of heavier rainfall for part of the year. This often follows a period of lower than normal humidity. In the terrarium, a period of reduced humidity is easily simulated by simply misting less frequently and with less water for a few weeks prior to the Amazon milk frog breeding attempt.

Simulating tropical downpours is more challenging. After a few weeks of reduced humidity, the Amazon milk frogs should be moved to a pre-prepared, specialized terrarium called a rain chamber. This terrarium consists of a tall aquarium that has an area of 2 to 3 inches of standing water at the bottom (a false bottom can be used to cover much of the base of the terrarium). A submersible water pump sold for aquariums is used to pump water from this standing water to the ceiling of the terrarium, where the water drips down from a spray bar or from a section of tubing with many holes along its length. When the pump is turned on, the water circulates continuously.

Temperatures should be in the range of 80 to 85 degrees Fahrenheit, and the rain chamber should contain many plants and hides in order to make the Amazon milk frogs feel secure. It is a good idea to acclimate the frogs to the rain chamber for several days prior to the breeding attempt. Feed them well during their stay in the rain chamber.

While Amazon milk frog breeding success has been reported in the simple rain-chamber design just described, some hobbyists report reliable success when an enclosed, non-see-through container, with 1 to 2 inches water and a hole large enough to allow the frogs access, is added to the rain chamber. This breeding box should be anywhere from 5 to 8 inches square at the base, and it simulates a tree hole, where these frogs usually breed in the wild.

Amazon milk frog breeding takes place in the evening or during the night, usually within 24 to 72 hours after the water pump is turned on. Within a few hours, the male will grasp the female around the shoulders. This embrace is known as amplexus. The male may grasp the female for several days, even if she is not receptive to mating, but if eggs are absent after five days, remove the frogs to their original terrarium and wait a few weeks before trying again.

Eggs are laid in water and clutch size is generally between 100 and 200 eggs. Remove the Amazon milk frog parents to their terrarium and place the eggs in nothing smaller than a filled 20-gallon long aquarium at a temperature about 80 degrees. The eggs develop rapidly, and tadpoles should hatch in about 24 hours. They are gregarious and not cannibalistic unless there are dead tadpoles present, and they can remain in the same aquarium after they hatch.

At first, Amazon milk frog tadpoles have external gills and hang on to the side of the aquarium while they absorb the last of the egg yolk in their stomachs. They become free swimming within a day or two. At this point, offer foods like flaked fish food and sinking fish food pellets. In a small, unfiltered aquarium, you should change most of the water volume daily. If a filter is used, the sponge type recommended for fish fry is the perfect choice. Avoid over-agitation of the water, as this can lead to increased risk of gas-bubble disease. Tadpoles with gas-bubble disease will have difficulty staying down and will tend to float. The stress of continually attempting to dive will ultimately lead to the tadpole’s death.

Keep Amazon milk frog tadpoles at lower densities as they grow. They reach metamorphosis in three to five weeks, and young froglets measure about a half an inch at metamorphosis. In order to avoid drowning, remove tadpoles to a sloped aquarium, containing just enough water at one end to cover the tadpoles and a land area at the other end. A 10-gallon aquarium should be perfectly adequate. Of the 100 to 200 tadpoles, not all will metamorphose at a time – perhaps 20 at any given time. Once they have lost 90 percent of their tails, they go straight into the grow-out container, so they don’t spend more than a few days in the sloped aquarium.

As soon as the Amazon milk frog front legs emerge the tadpole ceases to feed until the tail is completely resorbed. The reason for this is that the tadpole’s mouth changes during this time and can’t accept food. At this point they require a terrarium similar in size and decor to the adults.

After the Amazon milk frog tail has been resorbed, and until they are large enough to accept small crickets, foods should consist of flightless fruit flies dusted with vitamin and mineral supplements. In a large enclosure, where the flies will not always be in the froglets’ reach, I would feed about 20 flies per froglet. As they get older, their appetite will increase and their ability to hunt flies will improve, too.

Amazon milk frogs make rewarding captives for breeders willing to put in the time and effort. A first timer would do well to have 75 percent of their tadpoles reach metamorphosis, but it's quite possible to get more than 90 percent if their needs are being met.

Want to read the full story? Pick up the May 2011 issue of REPTILES, or subscribe to get 12 months of articles just like this.