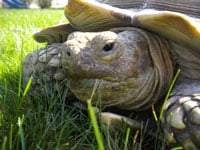 44 year-old Geochelone [Centrochelys] Sulcata usually comes back but hasn't yet.

Protections Sought For Yuman Desert Fringe-toed Lizard and 6 Other Herps
What Would You Do if a Monitor Lizard is Knocking at Your Front Door?
Killing Frogs For Fun And Funds

Lance, a 44 year-old African spur-thighed tortoise (Geochelone [Centrochelys] Sulcata), also called a Sulcata tortoise, went missing from a Chicago-area backyard barbecue last Sunday night and its owners are hoping for its return. The Chicago Tribune is reporting that Lance's owners, Andy and Susan Lechner acquired the chelonian seven years ago from a friend who worked at a pet shop. The Lechner's say Lance has walked off in the past but always returned. 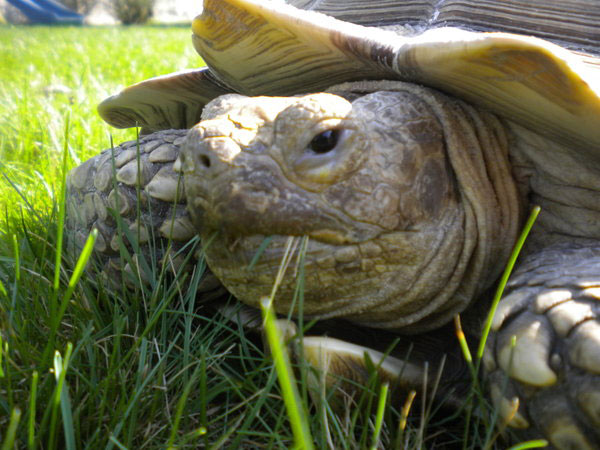 Lance, a 44 year-old African spur-thighed tortoise has been missing from a Chicago- area couple's backyard since June 17. P

The tortoise, according to the Tribune story, is apparently the first of its kind to be reported missing to the DuPage County Animal Control. The report cites officer Laurie Donahue, who says she has heard of reports of missing chickens, guinea pigs, and rats, but not for a tortoise. "We get reports, but not too often on a 45-pound tortoise," she told the Tribune. The Lechner's have since posted "missing" signs and pictures in their Lombard neighborhood in the hopes that someone has found Lance and will return him.