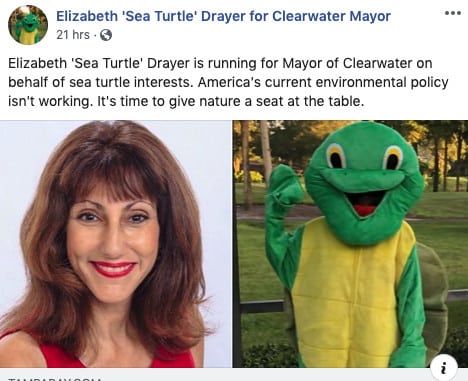 A Loggerhead Sea Turtle As Florida City Mayor? Why Not!

Man in Florida Gets Bit By Rattlesnake As He Tried To Kiss It
Bog Turtle Is Official State Reptile Of New Jersey!
Indonesian Pop Star Irma Bule Dies After King Cobra Used as Stage Prop Bites Her

A retired lawyer in Clearwater, Fl wants a loggerhead sea turtle (Caretta caretta) to run for mayor of the Gulf Coast city. Elizabeth Drayer says the city doesn't need another finance person or government person as the next mayor. In fact, she says the city needs a reptile to service as the next leader of the city. 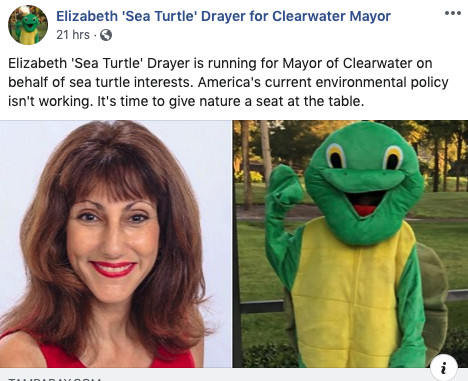 “The goal of this campaign is to elect a nonhuman to give nature a voice,” said Drayer, 58, a lifetime environmental advocate who is pushing for the city to elect the loggerhead sea turtle (advocate) as its next mayor. “It sounds wacky,” Drayer said, “but it really isn’t,” she told the Tampa Bay Times.

Drayer initially wanted to run under the name "Sea Turtle" but city code, obviously, doesn't allow that as candidates for office must be city residents who are also registered to vote in the city. So, she is going ton sign an affidavit so she can appear as Elizabeth 'Sea Turtle' Drayer on the next electoral ballot.

As an advocate for the environment, Drayer says the political system should be expanded to include ecosystems and animals. Of course human guardians would actually be elected to look out for their interests. If Elizabeth 'Sea Turtle' Drayer wins in the March 2020 race, she will represent the interests of loggerhead sea turtles, and if elected, she is ready for litigation if necessary to protect the interests of a mayoral turtle. And she is not accepting any money contributions.