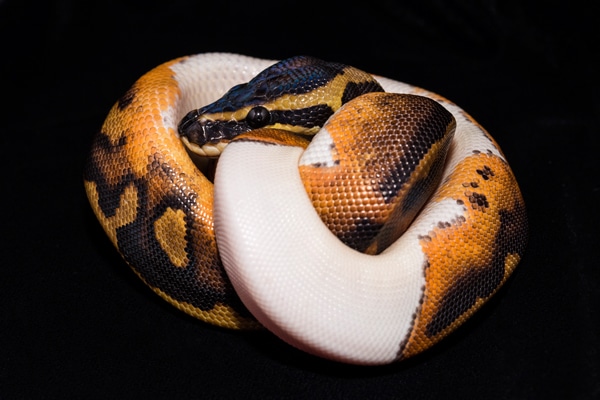 It pays to know some basic rules if you’re going to breed herps!

Having an understanding of genetics is important if you are thinking about jumping into reptile breeding, especially if you are interested in producing different color and pattern morphs. The purpose of this article is to explain some of the fundamentals of genetics as they apply to breeding.

Due to the ongoing popularity of ball python morphs, we will use this species for our examples to illustrate relevant concepts, although the information in this article can be applied to reptiles of all species.

The Molecular Basis of Inheritance 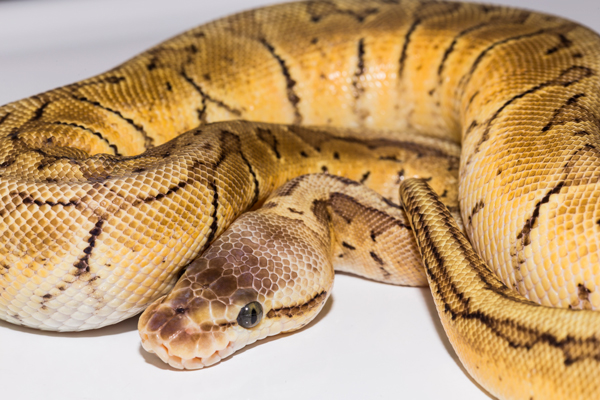 A gene is a segment of DNA that provides the instructions on how amino acids are arranged in order to make various proteins that are used by a species. Proteins are a vital component of cells that play a variety of critical functions. Enzymes, antibodies, and cell receptors are a few examples of proteins.

All somatic cells of an animal possess all of the genes that the animal has. What makes an animal’s various cell types different (e.g., skin cells, nerve cells, etc.) is not what genes are present, but which genes are expressed. While skin cells and nerve cells are genetically identical, it is the fact that each cell type has different sets of genes turned on and off that causes them to look and function differently.

The process by which gametes are produced is known as gametogenesis. Normally, when somatic cells divide, they first replicate their DNA so that each cell produced from the division will have a complete set of chromosomes. Gametes are derived from diploid parent cells, but become haploid during the cell divisions of gametogenesis. Each sperm cell gets one chromosome from each of the father’s chromosomal pairs, and each egg cell gets one chromosome from each of the mother’s chromosomal pairs. Because fertilization is the combining of sperm and egg, the fertilized egg is once again diploid, with half of its chromosomes from the mother and half from its father.

A mutation is an alteration in DNA sequence that changes the instructions on how a protein is to be made. There are a number of different types of mutations that can occur. Some cause a new protein to be made, some prevent a protein from being made. Some mutations can alter gene regulation, resulting in more or less of a protein to being made, or affecting where in the body a protein in made. Some mutations may have a lethal effect on the developing animal. Other mutations alter where a skin pigment is produced, or the level to which that pigment is produced. These types of mutations are the genetic basis of the various color and pattern morphs that you may come across in reptiles.

In order for a mutation to be inheritable, the mutation must be present in the sex cells (sperm and egg) of a parent. If a mutation first occurs in a non-sex cell (i.e., somatic cell) it will not be inheritable. Somatic cell mutations may be responsible for other abnormalities, though, such as cancer.

Another variation of dominance is what is known as incomplete dominance, which is the case for a number of ball python morphs. With an incomplete dominant allele, an animal that is heterozygous for the allele will have one mutant phenotype, while an animal that is homozygous for that allele will have a different and often more extreme phenotype than observed with the heterozygous phenotype.

Examples of incomplete dominance in ball pythons include the mutations that are responsible for the fire and pastel morphs. Heterozygous pastel pythons have a lightened coloration, while homozygous pastel pythons have an even lighter coloration. Fire ball pythons are a little different. Heterozygous fire ball pythons exhibit a reduction in certain brown pigments as well as a pattern reduction, but snakes that are homozygous for the fire mutation (often referred to as “super fire”) have a leucistic phenotype. Leucistic animals, similar to albino animals, have little skin pigmentation, except they lack the pink eyes that are typically present in individuals with albinism.

The term co-dominant is often used interchangeably with incomplete dominant, but the two terms actually have different meanings. Co-dominance refers to a situation in which two different alleles both cause phenotypic changes in the same animal. For example, if allele R is responsible for red scale pigmentation and allele B is responsible for blue scale pigmentation, an animal that has both R and B alleles would likely have a purple phenotype.

Because a gene occurs on a specific chromosome, and that chromosome belongs to a chromosomal pair, an animal will usually at most have two copies of the mutant gene in which we are interested. This simplifies the calculation of inheritance probabilities. While multiple copies of the same gene can exist on a single chromosome, the chance of multiple gene copies spontaneously mutating the same way is so small that it can be ignored. In order to calculate inheritance, we use what is known as a punnett square. 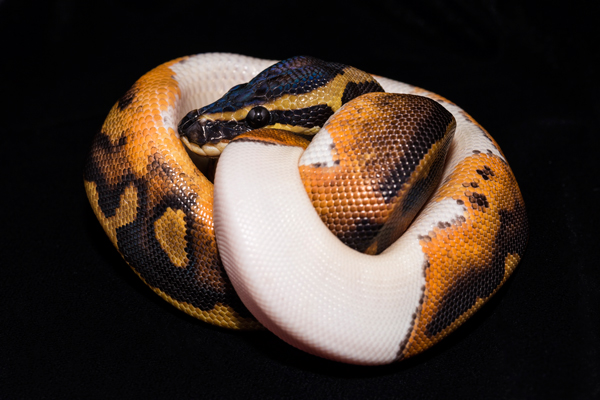 Let’s look at a few examples. For these examples, we will use pinstripe as the dominant mutation and albino as the recessive mutation. When referring to a chromosome that does not possess the mutant allele we are examining, that chromosome is referred to as being “wild-type,” or more commonly among reptile keepers, it is called “normal.” 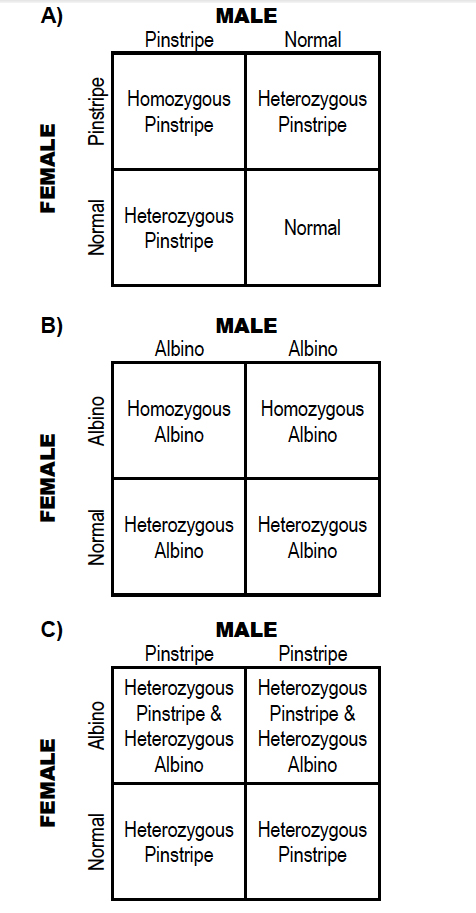 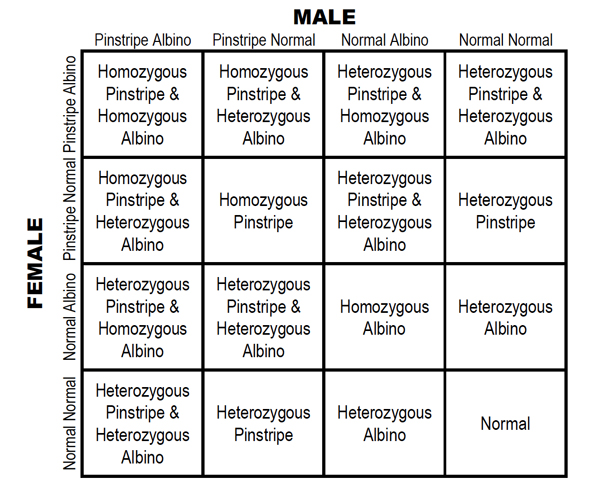 Keep in mind that all percentages are probabilities. Even though there may be a 50 percent chance of a given outcome occurring, it is possible that it may occur at a much higher or lower rate for a single breeding. Think about tossing a coin. There are only two possible outcomes, so there is a 50 percent probability of each. Because each flip is an independent event that is not influenced by past evens, flipping a coin 10 times will not always result in five heads and five tails. But as you increase flips of the coin, it becomes more likely that results will begin to match the probability. The same principle applies to breeding.

Hopefully this article has provided you with an understanding of the some of the key concepts of genetics. We really have only touched the surface of the topic, but you should now have the knowledge to be able to communicate with fellow reptile enthusiasts about how different reptile morphs were produced. Genetics is a complicated subject, so don’t get intimidated. Keep in mind that everyone had to start somewhere. As long as you continue reading and never hesitate to ask questions, you will be talking like a pro in no time.

Steven Bulinski has been keeping various exotic animals for the last 30 years, and is a former manager of a molecular genetics lab at UW-Milwaukee. He is also interested in wildlife photography, and shares his work on his website stockwildlife.com. Steven and his wife currently reside in Florida.