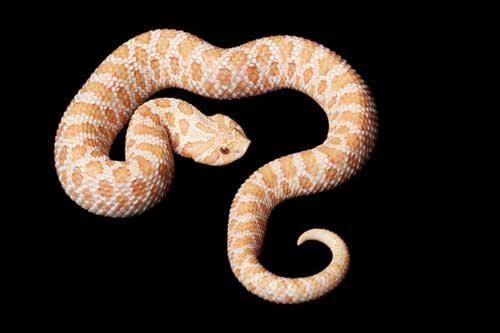 The Western hognose is a docile, easy-to-handle snake

The Western hognose snake is a harmless, diurnal North American colubrid that has grown in popularity in collections around the globe. Its natural range extends from southern Canada through the central U.S., including Arizona, New Mexico and Texas, into northern Mexico. 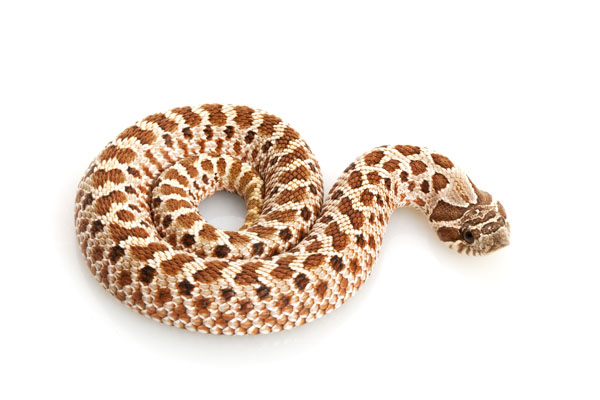 Western hognose snakes come in a variety of colors. This is a “peach” specimen. Photo Credit:  fivespots/Shutterstock

It has a stout build, is covered in keeled scales, and possesses a sharply upturned snout that is used for digging and burrowing in loose sandy soils and to hunt for prey. Dorsally, the Western hognose has a ground color of tan, brown, gray or olive, with darker, somewhat square blotches or bars, or rows of parallel spots that run longitudinally along the body. Ventrally, the Western hognose has glossy black scales, often interspersed with white, yellow or orange.

The Western hognose is probably best known for its wide array of harmless defensive ploys, sometimes accompanied by a loud hiss that is achieved by the snake forcing air through its unique skull and rostral bone structure. Added to this is the Western hognose’s ability to compress, or flatten, its body when threatened (this might be an attempt on the snake’s part to appear larger and more dangerous to would-be predators). Often while in hissing mode, a Western hognose will also flatten out the ribs along its neck, or “hood” like a cobra. This bluff is most impressive with mature animals; in younger snakes it’s quite amusing.

An alarmed Western hognose will also strike, often repeatedly with a closed mouth in a series of either forward or sideways movements. When a Western hognose does strike, it hits the predator with its heavily keeled snout, but does not bite.

With increasing varieties of color phases, patterns and genetic mutations, its ease in care, and its uniqueness, the Western hognose is a great choice for new and seasoned reptile enthusiasts. I have worked with the Western hognose for many years, and it is my absolute favorite snake to keep and work with.

Due to the growing number of Western hognose breeders around the world, there is now a greater availability of animals, along with increasing choices of pattern and genetic mutations and great color phases.

Female Western hognoses can grow to a maximum size just short of 3 feet, with a weight that normally does not exceed 800 grams. Males are somewhat smaller, averaging between 14 to 24 inches.

Western hognoses may live up to 18 years in captivity.

A Western hognose does require a secure cage, even though it is not as adept at escape as other snakes. A plastic, 5-gallon reptile terrarium with a secure lid is ideal for a hatchling. These are inexpensive and widely available at most pet stores or reptile shops online that sell reptile supplies. An adult Western hognose can be kept in a 20-to 40 gallon equivalent enclosure. The Western hognose is a ground-dwelling species, so opt for an enclosure with a greater amount of floor space; height is not as important.

If housing several specimens, it can be more economical to use large, clear, plastic shoe or sweater boxes, the size of which depends on the size of the animals. I normally use three different sizes: 5-liter boxes for established hatchlings, 30-quart boxes for adult males and 40-quart boxes for adult females. Shoe and sweater boxes should have ample ventilation, especially in more humid regions, which can be achieved by drilling holes into them.

I recommend keeping the cage furniture simple.  A sturdy water bowl and a hide box or two will suffice.

For hatchling Western hognoses, the best substrate is newspaper. While it is not the most aesthetically pleasing, it is inexpensive, inhibits the growth of bacteria and eliminates the threat of a hatchling ingesting substrate that could cause an abdominal impaction.

Shredded aspen bedding is the most popular reptile bedding for adult Western hognoses. It is easy to clean, allows the snakes to burrow, and, unlike cedar and pine, it is not hazardous to a snake’s respiratory system. Also popular, and generally safe, are recycled newspaper products that make cleaning up after the snakes easy. They also absorb odors fairly well and allow the snakes to burrow, which is important to hognoses, especially younger snakes.

Although wild Western hognoses inhabit regions of sandy, loose soils, it is not recommended that sand be used in their enclosures due to the threat of impaction. Some keepers prefer to feed their snakes in a separate enclosure or receptacle to prevent their possibly ingesting substrate.

Heat is especially important for proper digestion of food items, for gestation of eggs in females, and, when combined with light, it provides Western hognose snakes with seasonal breeding cues.  Failure to maintain proper temperatures can lead to health problems in your pet, and worse. 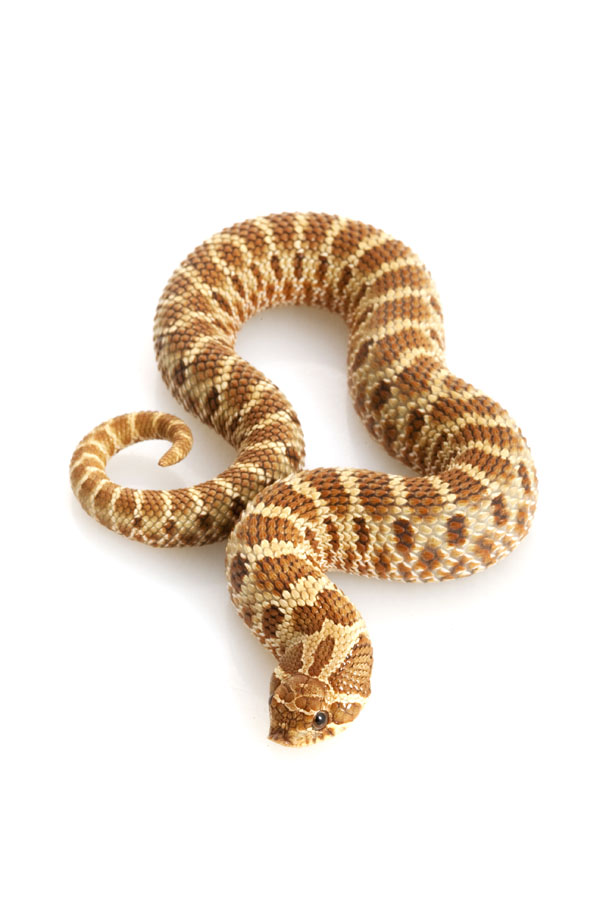 The upturned snout of the western hognose snake helps it to burrow. Photo Credit: fivespots/Shutterstock

Under-tank heaters are available at pet stores and are specifically designed for use with most types of terrariums. One of these can be used to provide a hot spot basking area maintained at about 90 degrees Fahrenheit for your Western hognose. Be sure to get an appropriately sized heater to allow for a heat gradient—you don’t want it to heat more than one-third of the enclosure, so the snake can get away from the heat if desired—and never use medical heat pads found in pharmacies. While these may be adjustable, they can be potential fire hazards, or overheat the enclosure. Hot rocks are also to be avoided. The cooler end of the enclosure can be maintained in the high 70s. Keep this heat pad regulated with a thermostat controller.

Many Western hognose breeders house many snakes in rack systems. In a rack set-up, heat tape and a programmable thermostat or rheostat combination is most commonly used to provide heat. These can be purchased from reptile specialty stores or online. Heat tape is normally affixed to the shelving the enclosure sits on or in, and is a very good and easily manageable method for heating the enclosures in a rack.

Established Western hognoses are usually eager feeders; some will come at you with open mouths appearing to say, “Feed me!” For stocky snakes, Western hognoses can be quick, and they often don’t follow the standard practice of striking at prey head-on—they will strike at food items from any direction. For these reasons, it’s best to use tongs, forceps or hemostats when feeding Western hognoses.

It is best to feed an appropriately sized meal—meaning a prey item that’s about the same diameter as the snake’s head—one to two times per week. Once it has been swallowed it should produce a noticeable lump, but not one that is so large that it is still noticeable 24 hours later. In the wild, Western hognoses consume a variety of prey items, including small rodents, lizards, amphibians and the eggs of ground-nesting animals. Pets do very well on a diet of pre-killed or frozen/thawed mice. Many Western hognose keepers prefer frozen/thawed rodents because they are easier for the snake to digest; at the cellular level, the food item has been broken down by about half. Also, as with pre-killed mice, the risk of your Western hognose being injured by a live mouse is eliminated.

When buying a neonate Western hognose, get one that has eaten three to four times on its own.  Ask before you buy the snake. Responsible breeders will not offer Western hognoses for sale unless they are established feeders. It is best to feed babies with small hemostats so you can better manipulate the prey item, and use it to draw the attention of the baby hognose. Most babies will readily accept as their first meal a thawed pinky mouse dipped in warm water (and it’s interesting to watch a young hognose drink the water dripping off the mouse just before it begins eating it). Repeating this a few times during the first several meals will result in a young Western hognose becoming an established feeder that looks forward to mealtime.

Some hatchling Western hognoses can be challenging to get to accept mice. Scenting a thawed pinky mouse with canned tuna or salmon juice is easy and may encourage these snakes to eat. It usually gets good results, and it’s easy to wean the snakes off this form of scenting in a very short time. Sometimes “braining” a pinky works well, too, although this is not for the squeamish. It involves making a small pinhole in the skull of a frozen/thawed pinky, and squeezing a bit of brain matter out to smear on the mouse’s nose.

It is not recommended that toads be used as a scenting medium for Western hognoses. Using toads can introduce dangerous parasites to the snake, and it can also be difficult to wean small Western hognoses off toad-scented mice. Finding toads throughout the year can present problems, too.

Even though wild Western hognoses inhabit areas that are semi-arid, pets still need a ready supply of clean water at all times. Change the water and wash the water bowl at least every week, and more often if the snake fouls the water.

The Western hognose is a docile, easy-to-handle snake. While individuals may exhibit spectacular bluffing displays as mentioned previously, these are not signs of aggression. Do not bother a snake that is exhibiting bluffing behavior, so as not to cause it undue stress. Wait until the snake has calmed down, and then handle it.

Western hognose bites are very rare, and typically occur due to a snake’s overeager feeding response. Some snakes will gently take food off hemostats, or they may prefer having food left in a quiet corner of the enclosure to eat at their leisure. Others will emerge from their enclosures ready for food with mouths open. No matter which type of behavior your animal displays, use hemostats, tongs or forceps to reduce the chance of an accidental bite.

Of the many Western hognoses I have produced or owned in my personal collection, over the number of years I have worked with these animals, I have been bitten only once. If a bite occurs, do not force the snake off by yanking on it, which could damage its jaws. Instead, pour a small capful of mint mouthwash onto the area the snake is biting. This is harmless to the snake and will result in it releasing its bite. Sometimes a hognose bite may lead to mild swelling at and around the bite site. This is best remedied by cleaning the location of the bite with soap and water and taking Benadryl within an hour after a bite occurs.

For decades, there has been discussion as to whether the Western hognose should be classified as a venomous reptile. It produces a proto-lipase enzyme cocktail in its saliva (as nearly all life forms do) that many herpetological authorities believe is used to help break down food. When someone uses the term “venomous,” they are referring not only to the type of enzyme cocktail injected into a victim, but also the system used in the delivery of venom. The Western hognose has a very primitive and inefficient delivery system, and its oral secretions (saliva) are harmless to humans. One might also look at its enlarged maxillary teeth as being used primarily to secure and hold food items.

Jeff Clayton has produced and worked with a large variety of Western hognose morphs. His current projects include a variety of color-phased Western hognoses, Lavender and pattern mutations. Visit his website at cahabariverreptiles.com.