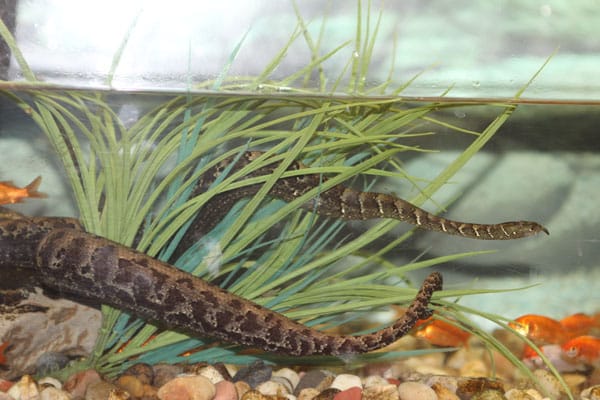 When it comes to unusual snakes, the tentacled snake is high on the list. Its long, prehensile tail, heavily keeled scales and two mysterious rostral projections (the “tentacles”), coupled with an aquatic lifestyle and a tendency for camouflage-aiding algae growth, makes the tentacled snake a standout even among oddball snakes. This unique colubrid has been gaining recognition among reptile keepers, and it is increasingly considered an interesting captive that, when set up correctly, can make a hardy pet and provide caretakers with years of enjoyment. With reptile health and wellness prioritized, this exotic species can thrive. Its small size and docile nature, as well as its unique hunting and feeding mechanisms, make the tentacled snake attractive to snake enthusiasts who crave something different.

Native to Southeast Asia, the tentacled snake inhabits shallow, relatively still and warm bodies of water, where it hunts for piscine prey. It is often found in rice paddies within its natural range, and the tentacled snake is even considered a pest species by some, due to its frequent visits to tropical fish farms. Two naturally occurring pattern variants occur in Erpeton tentaculatum: a banded and a striped form. The base color is various shades of brown, with black and white patterns. Other colors are occasionally present, but in very limited amounts.

There are few private breeders working with tentacled snakes, so when specimens are available they are usually wild-caught snakes. Availability is seasonal and sporadic; they tend to be available most often during the summer and fall months. Tentacled snakes are rarely, if ever, available at standard pet shops. Reptile specialty shops, expos and importers offer the best chance of finding them for sale, and the demand is fairly high. Tentacled snakes tend to sell quickly when they’re available. 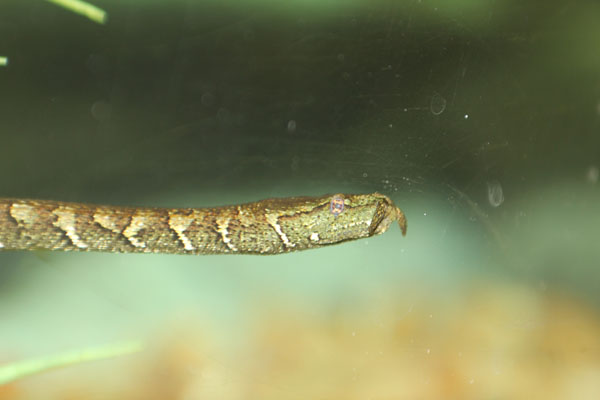 The function of the “tentacles” on the side of a tentacled snake’s face remain somewhat mysterious.

The tentacled snake is small, typically maxing out between 20 and 30 inches in length, though 36-inch snakes have been recorded. Nearly a quarter of the length is tail. It is a slender snake, with an average weight between 140 and 200 grams. There is not much, if any, size difference between males and females.

Information regarding the life span of the tentacled snake in captivity is sparse. I suspect the typical colubrid life span of 10 to 20 years would apply. The oldest specimens I work with are 9 years old, and they are still producing young and showing no signs of slowing down.

When housing tentacled snakes, it helps to think of them more as fish than reptiles when it comes to choosing species specific snake supplies. They are completely aquatic, coming to the water’s surface primarily to breathe. Aquariums and leak-proof reptile terrariums are the best housing choice because they are designed to hold water and offer the best viewing opportunities.

A single adult tentacled snake can be kept in a 20-gallon “long” aquarium, although I have found this species does best when kept in small groups. Up to four can be kept in a standard 55- to 60-gallon aquarium. A 125-gallon aquarium can comfortably house up to seven tentacled snakes. The surface area in the aquarium is more important than its height, but the aquarium should be tall enough to allow both a proper water depth and clearance between the water and the aquarium top, as tentacled snakes are good escape artists. A haul-out area can be provided, but in the nearly six years I have worked with tentacled snakes, I have never known them to use one. The ideal water depth appears to be between 6 and 12 inches. Provide plenty of hiding places and anchoring sites with various aquarium habitat accessories. Tentacled snakes use their prehensile tails to anchor themselves, much like a seahorse. Driftwood, stones, logs and aquatic plants (live or artificial) can be used to create the ideal habitat.

The aquarium should be completely covered with glass or plexiglass with a limited number of ventilation holes drilled into it. The top should be at least 6 inches above the surface of the water. When choosing snake habitat products, do not place any objects that would allow the snakes to get to the top. As mentioned, tentacled snakes are escape artists, and extreme precautions must be taken to prevent them from getting out because even a few hours on dry land can cause fatal desiccation and internal injury.

Water quality, particularly the pH, must be monitored to ensure healthy tentacled snakes. An ideal pH is between 5.0 and 6.6. Use an aquarium buffer or blackwater conditioner to maintain pH in this acidic range, as alkali pH can cause skin problems in tentacled snakes. Ammonia, nitrite and nitrate should also be monitored and kept at a level as close to zero as possible (although healthy snakes will be very tolerant of spikes in any of these parameters). Test kits for pH, ammonia, nitrite and nitrate are easily found at pet shops and online reptile stores that sell tropical fish and are very simple to use. 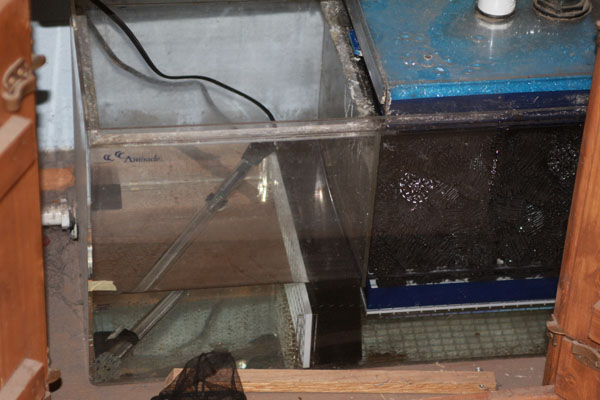 Having an aquarium heater in a sump rather than in the actual tentacled snake aquarium, reduces the risk of escape and injury..

A water filter should be used, as well, because tentacled snakes defecate frequently and can foul water rapidly. Ideal filters are either submersible filters with an adjustable flow (low water agitation is best) or a sump-type filter with in-tank overflow bulkheads, like the Tetra whisper Internal Power Filter. I prefer sumps because they can contain the aquarium heater, keeping it away from the snakes (otherwise, they could accidentally burn themselves if they anchor themselves to the heater). Having the heater in a sump also eliminates the need for wiring to enter the snakes’ tank, which cuts down the possibility of escape. Regular water changes are a must, regardless of which filtration method used.

A submersible aquarium heater (such as Aqueon Submersible Aquarium Heater) can be used to maintain a year-round water temperature between 77 and 82 degrees, though caution must be exercised (see above section). Lighting can be simple ambient light or fluorescent tubes above the aquarium. Heat lamps are unnecessary if an aquarium heater is used in the water.

Tentacled snakes can be kept without substrate at all to facilitate cleaning, or they can be kept on reptile gravel or sand like Exo Terra Small River Pebbles and Exo Terra Riverbed Sand. Substrates to avoid would be bright, unnaturally colored gravels or sands, aragonite/lime/coral-based substrates, or crushed glass substrate that is occasionally sold for use with tropical fish. Substrate ingestion is rarely, if ever, an issue with tentacled snakes.

Tentacled snakes love to eat, and eat often. They feed strictly on live reptile food like fish in captivity. In the wild, amphibian larvae are also eaten, but fish make up the bulk of the diet. I’ve fed mine a variety of tropical fish, including bettas, rosy barbs, South American cichlids, gouramies, platies, swordtails, mollies, rosy reds and guppies. Their staple food, however, is feeder goldfish (comets). Despite reports that comets can cause problems in other snakes, I have maintained tentacled snakes for years on a goldfish-only diet with no ill effects, including thiamin deficiency, parasites, fungal disorders or copper toxicity. I suspect that E. tentaculatum has evolved digestive mechanisms to help it overcome the hurdles other snakes experience when fed an all-goldfish diet.

Tentacled snakes indicate that they are ready to feed by assuming a characteristic J-shaped posture and sitting still for relatively long periods of time (up to 30 minutes between breaths). Once a fish enters the interior of the J, they strike quick as lighting, grabbing the fish by the head and swallowing it swiftly. Fish should be no more than a quarter the length of the snake and no more than 1.5 times the diameter of its neck.

Healthy tentacled snakes will eat about 20 to 30 2-inch fish per week. I keep appropriately sized feeder fish in the tank at all times and allow the snakes to feed at will, replenishing the stock when it gets low. This may seem like a lot of food for a snake, but fish are much leaner meals than mice. 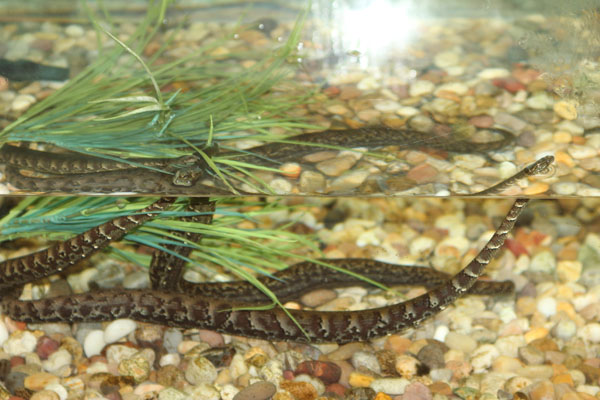 Like all aquatic snakes, tentacled snakes are rear-fanged and possess mild venom. However, their venom appears to be fish specific and its delivery system is very rudimentary and inefficient. This combined with their seemingly natural docile demeanor makes a tentacled snake no more of a danger than the commonly kept western hognose snake. That said, the venom could still cause a problem if you are allergic to it, so always exercise caution if you have to handle your tentacled snake.

None of the tentacled snakes I work with have ever attempted to bite me, and I have worked with them for years at all stages of development. However, handling should be kept to an absolute minimum. I weigh each snake once a month and examine them to check for skin problems or trauma and that’s it. While they will rarely even wiggle about—about all they may do is stiffen up—handling is very stressful for them. Not only are they prone to dessication out of the water, the belly muscles of a tentacled snake are not designed to bear the snake’s weight. Lifting one up can actually risk internal injury, and if the snake does decide to thrash about then that risk is greatly compounded. Tentacled snakes should be considered a display-only species.

Ashley Troy Quick is a 2006 graduate of West Virginia University with a B.S. in Animal and Veterinary Sciences. Since first breeding fire-bellied toads in 1992, he has kept and bred 76 species of herps, including tentacled snakes, Panamanian golden frogs, hellbenders and Uroplatus geckos. He lives in Wheeling, WV where he works as an animal keeper at Oglebay’s Good Zoo.