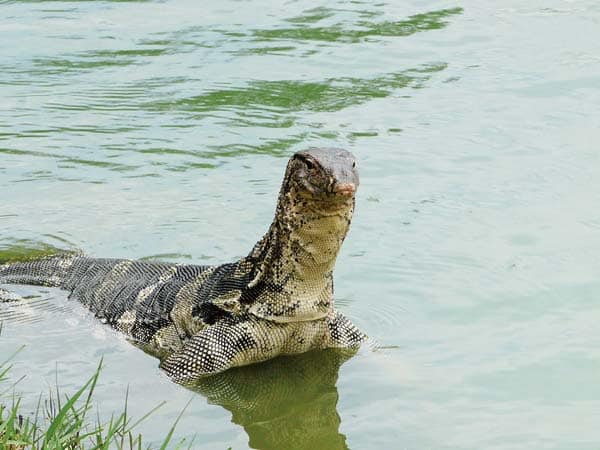 There is a lot to love about Bangkok, Thailand. In fact, according to the Tourist Authority of Thailand, approximately 55 percent of the country’s visitors are return tourists. This mega-city, with an approximate population of more than 7 million inhabitants, offers an exotic culture, delicious food and beautiful landscapes. 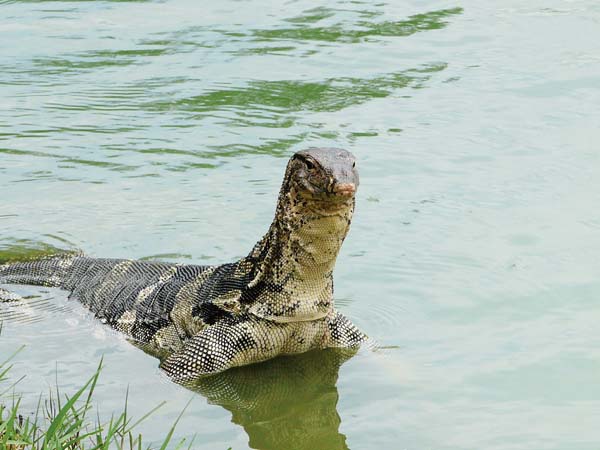 On September 15, 2006, the international Suvarnabhumi Airport opened in Bangkok, and it is the primary entryway in and out of Thailand. Once you arrive in the country, visit the Old Town to get an impressive introduction to Buddhist and Thai art and architecture. There are several monasteries present from different epochs of Thai culture. In the center of all of this is the famous Wat Phra Keo (the Royal residence); the nearby Wat Pho (Temple of the Reclining Buddha), with its 151-foot-long, 49-foot-high reclining Buddha; the Wat Arun (Temple of the Dawn); and Wat Traimit (Temple of the Golden Buddha), with its 10-foot-high, 5-ton, pure-gold Buddha. 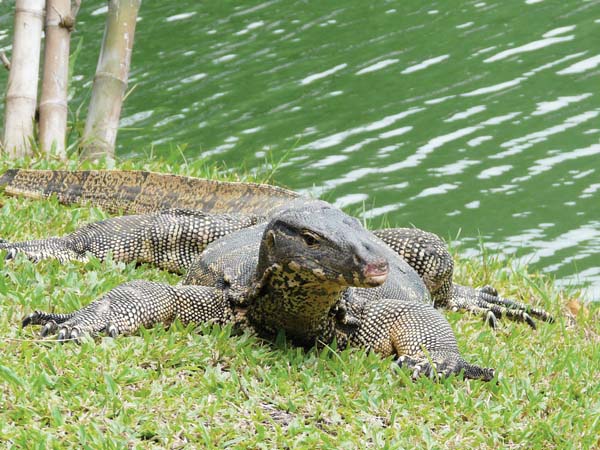 Monitors were found sunning themselves on the banks of the park’s lakes and ponds.

Thailand is a Haven for Herpers

Aside from the usual tourist attractions, there are also highlights that herpers will love. The most well-known is a snake farm called the Queen Saowapha Memorial Institute, formerly the Pasteur Institute. They breed more than 180 different snakes, 56 of which are venomous, and focus on producing anti-venom for snakebites. Each time I’ve traveled to Bangkok, I’ve visited the snake farm. After it was revamped and reopened in 2008, it became even more of a hot spot for snake lovers. Besides the demonstration of milking venomous snakes, there is a building with attractive displays containing many venomous and non-venomous serpents from southeast Asia.

On a Sunday, we decided to walk through Lumphini Park, which is only 10 minutes away from the snake farm. Located not far from the Silom area, the red-light district of Bangkok, and to the north of Siam Road shopping, the park is named after Lumbini, birthplace of Siddhartha Gautama, better known as Buddha, the founder of Buddhism, which is the main religion in Thailand. 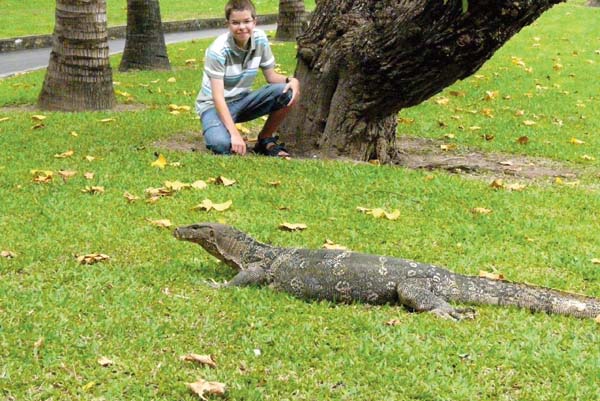 Lumphini Park was created in the 1920s by King Rama VI on royal property. A statue of the king stands at the park’s southwestern entrance, which is the main entrance. The park is 142 acres in size and contains artificial lakes. It is surrounded by office towers and upscale hotels, and is guarded by mounted police, who can be seen throughout the area. A popular place among locals, you can often see bikers, runners and people relaxing on the grass, or practicing taijiquan (t’ai chi) or aerobics in large groups. 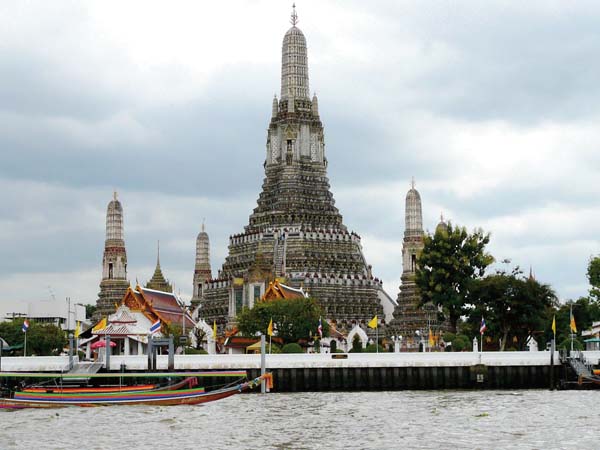 Wat Arun, the Temple of the Dawn

We entered through the main entrance and found it quite busy.  Still, although the place was packed with people, we quickly spotted our first reptiles. Young, 15-inch-long water monitors (Varanus salvator macromaculatus) rested along the banks of one of the lakes. They appeared to be accustomed to the crowds of park visitors.

After crossing a bridge to the main pond, we came upon a turtle sunning itself at the water’s edge. We approached slowly, but it, too, seemed accustomed to people and did not attempt to flee. We were able to capture it on film, but to our disappointment, it was not a native species. The introduced red-eared slider (Trachemys scripta elegans) has been one of the most popular turtles in the pet trade and more than 52 million individuals were exported from the United States between 1989 and 1997. These turtles are so prevalent that they can even be found around Thailand’s temples. But in Thailand, these animals are not intended as pets. Turtle release has been a traditional way for the Thai people to celebrate special occasions, such as birthdays, and even as a way to inspire luck when life is not going so well. The concept of “making merit” by performing good deeds is a central element of Buddhism. As native species are protected by Thai law, imported turtles, like the red-eared slider, are released during this traditional practice.

These animals thrive in the waters of Thailand. Food is plentiful and temperatures are warm. Therefore, red-ears, and other similar turtles, are increasingly prevalent in Thailand, where they compete with the endemic species for food.

As I stood three feet away from the turtle, photographing it, my son shouted that I should look to my left. I turned and couldn’t believe what I saw. About 7 feet away, behind a tree, was a huge, 5-foot-long water monitor, looking straight at me. Even though we’d seen water monitors throughout our trip, this animal was the largest we had seen thus far.

Inspired by the discovery that huge V. s. macromaculatus were living in the park, we searched the park’s large central pond, and especially the banks, for monitors. We found many — about 15 large monitors, with the biggest measuring between 7 and 8 feet in length. We spotted that one while crossing a bridge near the Octagon Pavilion, when its large head poked out of the pond as it hunted for food.

We found it surprising that many of the monitors were lying fairly close to people who were picnicking on the park’s grassy areas. And monitors that were swimming in a pond did not seem at all bothered by the paddle boats cruising past them. I would guess that the remnants of human picnics serves as a potential food source for the monitors, in addition to the rodents and birds found within the park.

For those expert herpers who want to know more, check out the ReptileChannel Quick-Care video on the Asian water monitor.

Monitors are typically large lizards, with the classical proportions. There are four species native to Thailand: the water monitor; clouded monitor (V. nebulosus); Dumeril’s monitor (V. dumerilii), which is easily recognized by its orange head; and the very rare rough-necked monitor (V. rudicollis).

Water monitors can reach a total length of more than 9.5 feet, depending of the subspecies, making it one of the largest lizards in the world.

The distribution of V. salvator extends from Sri Lanka (where the nominate species V. s. salvator can be found) across Myanmar, Indochina, Malaysia, over the Indonesian islands to the Philippines. The subspecies described here, V. s. macromaculatus, occurs on the Asian mainland from Myanmar to Vietnam in the east and south to Singapore. All V. salvator are — as their common name implicates — aquatic. They live close to bodies of water and are often seen swimming, using the strong tail to move forward.

Lumphini Park was one of the hot spots during the People’s uprising against the government in winter 2009/2010. Given that thousands of the protesters occupied the park for that time, the monitor population may have been influenced, but most likely the animals retreated into their hiding places and came out when things quieted down. The author’s 2011 visit to the park confirmed that the monitor population is still thriving, and both adults and youngsters were seen.

When chasing one of the monitors in the Bangkok park, I discovered one of their hiding places: a tunnel system comprised of concrete tubes that connect the park’s ponds and which help to absorb the area’s heavy monsoon rains. These tubes are about 2 feet wide and are a perfect hide-out for the monitors. These tubes are probably also a place where the monitors find prey such as rats and other small animals. If you ever visit Lumphini Park, and if you happen to stand on one of the grates that are found throughout, look down, and you may just spot a monitor swimming in a waterway beneath your feet.

By the end of our Sunday walk, we were thrilled that our stroll had ended up becoming a real herpetological experience. If you visit Bangkok, I strongly recommend that you visit Lumphini Park. Where else, in the middle of a mega-city of more than 7 million people, could you see monitors that big and that close? Not even at the national parks!

Uwe Gerlach is a herper from Germany, whose primary interest is amphibians, especially newts and salamanders. Living several years on both coasts of the United States inspired an interest in the animals he found there. Family vacations into Asia have also provided him with some interesting herping adventures. When not looking for herps, he works as a chemist for a large pharmaceutical company.