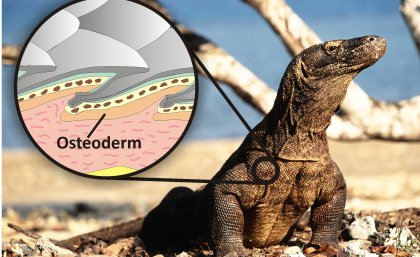 Imagine having to deal with a fast monitor lizard that grew to six meters in length and weighed 500 kg.

Would you have liked to live in Australia 50,000 years ago, at the same time that giant meat-eating monitor lizards roamed the Land Down Under? '

A 50,000-year-old 1 centimeter lizard bone discovered in Australia has led scientists to believe that giant lizards that are estimated to have grown to six meters in length with weights of around 1000 pounds may have roamed Australia alongside humans. According to research led by University of Queensland’s Dr. Gilbert Price, a vertebrate paleontologist, the Megalania prisca, (Varanus priscus) monitor lizard may have been living at the same time as humans in Australia.

Megalania has been compared to a nile crocodile, except it walked on land. It was first discovered in the 1800s. SOme scientists say that it ranks with the great white shark and the Tyrannosaurus Rex in terms of ferocity.

The problem is the scientists can’t say for sure if the small fossil that they discovered came from Megalania or from a Komodo dragon, (Varanus komodoensis) a large lizard that can now only be found in Indonesia’s Komodo Island and a few other Indonesian islands. The Komodo dragon is no slouch. It grows six to 10 feet in length, can weigh up to 300 pounds and are known to occasionally attack humans.

“It’s been long-debated whether or not humans or climate change knocked off the giant lizards, alongside the rest of the megafauna,” Dr. Price said in a press release put out by the university. “Humans can only now be considered as potential drivers of their extinction.”

The fossil bone, an osteoderm that came from just under the lizard’s skin, was discovered in Australia’s Colosseum Chamber, a cave deposit in Australia’s Mount Etna region in central eastern Australia. The age of the bone was dated using radiocarbon and uranium thorium techniques.