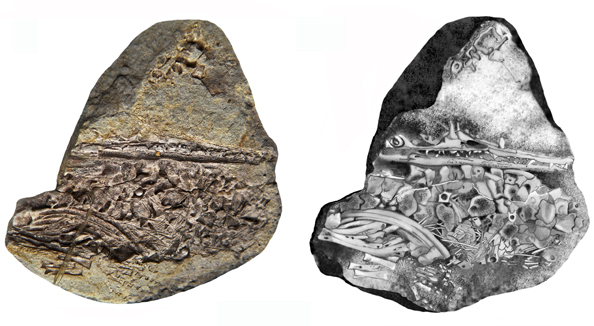 Mesosaur embryo, inside an egg, from the Early Permian Mangrullo Formation in Uruguay. Left: picture of the specimen

Although the oldest-known fossils of adult amniotes, (so-called because as embryos, such creatures are surrounded by a structure called the amniotic membrane), date back some 315 million years, very few collections of fossil eggs and embryos are available to paleontologists.

Dating back 280 million years or so, these new fossilized reptilian embryos have been unearthed in Uruguay and Brazil. They belong to the ancient aquatic group of reptiles called mesosaurs. The study of such exceptionally well-preserved fossils suggests that mesosaurs were either viviparous, giving birth to live young, (which pushes back this mode of reproduction by 60 million years), or they laid eggs which were in advanced stages of development.

In Brazil, the team uncovered a fossil specimen in gestation, which revealed that mesosaur embryos were retained in the uterus during most of their development. These reptiles, therefore, were probably viviparous.

The same researchers unearthed 26 adult mesosaur specimens in Uruguay, all of which were associated with embryos or very young individuals, dating from the same period as the Brazilian fossil. Although these more or less disarticulated (broken-up) specimens are difficult to interpret, most of them are probably embryos in the uterus, thus backing up the hypothesis that mesosaurs were viviparous.

The largest of these fossils may be young animals that were looked after by at least one of the parents, pointing to the existence of parental care. However, one isolated mesosaur egg was also found at the Uruguayan site. This find casts doubt on the hypothesis of viviparity (since this, as currently defined, would exclude the laying of eggs). Instead, it suggests that the Uruguay mesosaurs laid eggs at an advanced stage of development, which then hatched shortly afterwards – anywhere from several minutes to days later, rather than giving birth to live young.

The findings of the team therefore reveal the oldest known fossil amniote embryos from the Paleozoic (543 to 250 million years BP) and the first examples of embryo retention (and perhaps viviparity). But do the reproductive characteristics of mesosaurs highlighted in this study reflect their aquatic way of life (since viviparity is frequent in aquatic reptiles), or was it rather a fairly widespread condition among early reptiles? That is still unclear, and may be a puzzle that will never be fully resolved.