A new species of crocodile that lived during the Cretaceous Period was discovered by amateur fossil collectors three months apart on a beach in Sandown, England. The crocodile, Koumpiodontosuchus aprosdokiti or the "unexpected button-toothed crocodile" was recently described in the paper, "A new bernissartiid crocodyliform from the Lower Cretaceous Wessex Formation (Wealden Group, Barremian) of the Isle of Wight, southern England." 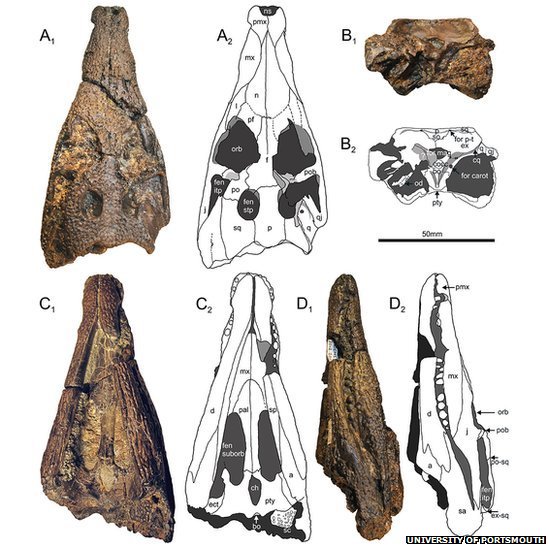 The skull of the species was found in March 2011 by a woman who was hunting fossils with her family on the beach. She then had staff at the Dinosaur Isle museum examine the skull, who told her that it may be from a large Cretaceous crocodile baby.

Another piece of the fossil, the snout, was found three months later, by fossil hunters Austin and Finley Nathan. Museum staff also examined the snout and upon seeing it, asked the woman who found the skull, Diane Trevarthen, to bring it back to the museum for further examination. Upon receiving both the skull and the snout, the staff realized that the two pieces were an exact fit.

University of Portsmouth palaeontologist Dr. Steve Sweetman, lead author of the paper that describes the new species told BBC News that he initially thought the skull belonged to a Bernissartia fagesii crocodile, which he said are of similar age, but after the skull was cleaned up, he noticed that it had a marked difference in the way the bones were arranged. "The location of the hole in the mouth, where the airway from the nose opens, was surrounded by bones at the very back of the palate," he said. "This tells us that the discovery is not only a new species but also a new genus of ancient croc closely related to, but subtly different to, those alive today."

Sweetman said that both parts of the skull are in remarkably good condition given the location of where they were found and the potential damage waves could have done to the fossils within days or hours of being washed on the beach. He speculates that both the skull and the snout were found very soon after they were released from the mud and debris in the area that he said was once a dinosaur-trampled river floodplain.

"The sheer serendipity of this discovery is quite bizarre. Finding the two parts is in itself remarkable. That they should be found three months apart by different collectors and taken to the museum where the same members of staff were on duty and therefore able to recall the first specimen defies belief."

The complete paper on the unexpected button-toothed crocodile can be read on the Acta Palaeontologica Polonica website.