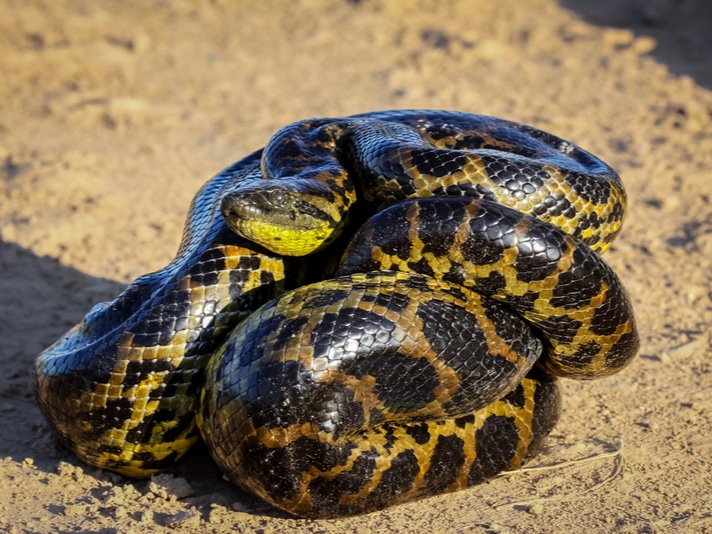 The anaconda may be one of the most prolific snakes in the world, but it’s the green anaconda (Eunectes murinus) that did in Owen Wilson in “Anaconda,” not the yellow. Also known as the Paraguayan anaconda, it’s found along the drainage of the Paraguay River and its tributaries in Bolivia, Paraguay, western Brazil, and northern Argentina. Although absolutely lovely and docile when worked with properly, this snake is not for beginners. This sheet overviews husbandry, including some reptile supplies, in regards to the Yellow Anaconda (Eunectes Notaeus). 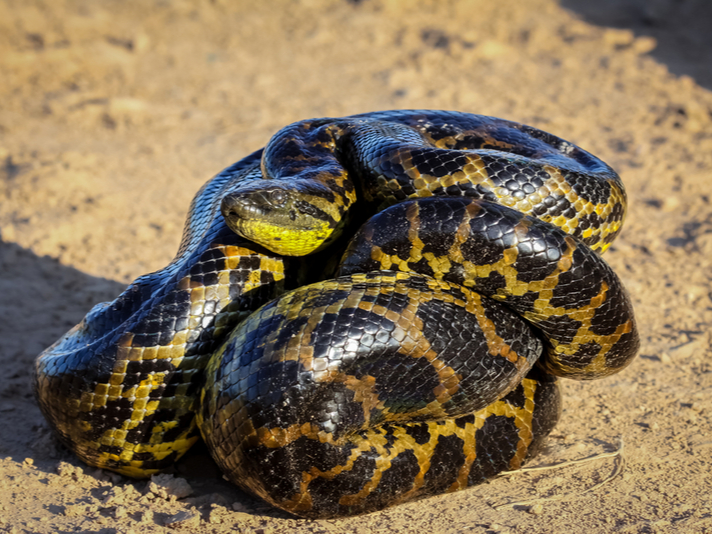 The yellow anaconda is smaller than the green anaconda, but with an average size of between 3.3 and 4.4 meters (10.8 – 14.4 feet) it’s still a massive snake. Females are generally larger than males, with the capability of reaching 4.6 meters (15.1 feet) in length. They usually weigh between 25 to 35 kg (55 to 77 pounds), although animals over 55kg (121 pounds) have been observed when food is abundant. Their coloration is a base of yellow, ranging from golden to greenish, with markings of black or dark brown in random splotches to aid in camouflage. Also, because the snake is semi-aquatic, their face is different than other species, being almost frog-like in appearance. Their eyes and nostrils are centered more on the top of their head to make hunting along the covered banks of slow moving rivers easier.

Yellow anacondas have amazing feed responses, and can be quite vicious to their live reptile food. They feed once a week to every 10 days. Most neonates, which are between 17 inches and 24 inches, start off being able to eat rat pups or weans, and from there you can judge the size of food your animal can eat based on its girth. Adults will eat large to jumbo rats, depending on size, and some of the bigger girls may even take a rabbit. They will also accept chicks, quail, and other fowl following the same sizing guidelines listed above.

Yellow anacondas are a very high stress snake as neonates, which means they prefer a smaller enclosure than you may expect. When your anaconda is a neonate, they will comfortably live in a 6 to 15 quart tub or a 15 to 20 gallon reptile terrarium. As they get older, you judge the size of the bin by the size of a snake. Whatever the size of your snake, halve it. For example, if your snake is 8 feet long, your enclosure should be at LEAST four feet long. That being said, the average adult anaconda requires an enclosure measuring 6’x30”x18” at an absolute minimum.

You need to keep the humidity in the enclosure between 60 to 70 percent as well as provide a water dish large enough for the snake to fully submerge in, as they like to soak. Because of the humidity requirements, yellow anacondas tend to do best in PVC enclosures. Aquariums generally have screen tops which let far too much humidity escape and means you’ll either constantly be misting or you will have to invest in an automatic mister to ensure proper humidity levels, as improper humidity can cause respiratory disease and difficulty with shed. A word of warning in regards to your water bowl; be prepared for constant water changes. Yellow anacondas like to defecate and urinate in their water dishes so it’s very important to be diligent with water changes.  Practice proper disinfecting methods to ensure your snake doesn’t get mouth rot or any other bacterial infections. To guarantee proper humidity, purchase a hygrometer.

Understanding the snake lighting and heating requirements for the Yellow Anaconda is a must for healthy animals.The ambient temperature in your enclosure should be between 81℉-83℉ (26℃ and 27℃), and you should have a heat pad with a thermostat that allows for a temperature drop at night. During the day your basking spot should be between 90℉-92℉ (32℃-33℃), and at night it should drop to 86℉-88℉ (30℃-31℃). It’s absolutely crucial that you accurately know the temperatures in your enclosure, so using an additional thermometer to monitor ambient temperatures is a must. Having improper temperatures can easily lead to aggressive behavior due to the snake being extremely uncomfortable.

In regards to snake substrate, newspaper or butchers paper work the best.

This snake does not require any special UV lighting, although you may want to use a sunlight bulb, like the Exo Terra Solar Glo, on them during the day on a 12/12 timer to simulate natural conditions and promote basking. You can use a reptile timer for light cycles. We personally do and it also provides a beautiful light to admire your snake in.

As a neonate, you may want to use a reptile hide in their enclosure. However, hides promote evasive behavior, which is fine with smaller species, but with large species it can cause large problems later on. It’s best to quickly lose the hide to promote confidence in your snake because the last thing you need is to have a skittish 10 foot, 50 pound snake trying desperately to get away from you every time you need to clean their enclosure.

Make sure to spot clean any waste product immediately and sanitize the enclosure to avoid any issues with bacterial infections.

The yellow anaconda is definitely a commitment. When kept properly they can live 15 to 20 years, which is a bit shorter than other large species such as the Burmese python which can easily live 25 years or more!

This is possibly one of the most influential thing in your snake’s outcome. The temperament of your snake relies heavily on human interaction. As they are a shy snake when they’re small, they do tend to nip. It’s important that you understand that the snake doesn’t want to hurt you, they simply don’t want you to hurt them. You need to work with your animal to build a trust and connection with them. When socialized properly they are an amazingly docile, intelligent snake. When they reach maturity it’s definitely best to have two people present when handling your yellow anaconda as it is a large animal and you may need help unwrapping yourself or simply supporting your snake properly as you take it out of its enclosure. Remember that this is an animal that reacts purely on instinct, so if it feels unsafe it will react defensively.

Anacondas do not need to pull back into the typical “S” formation most snakes do to strike, they can simple strike out to the side with little warning, which makes them unpredictable. Mind the muscles directly behind your snake’s head – they’ll tense visibly on the side it will strike towards. Again, this snake is not for those new to reptilekeeping. It’s best to have previous experience with large snakes.

The yellow anaconda may be my favorite species in the trade to keep. Their amazing personality is such an amazing reward for the hard work you put in. Due to pop culture and inexperienced keepers, this species is sorely misunderstood and they deserve a much better reputation. They react on instinct so poor behavior can usually quickly be corrected with husbandry adjustments, you just have to pay attention and be very aware of your animal. Bites are almost always a result of poor husbandry.

If you have had great success in keeping boas and you’re looking for a new species to add to your collection, I can’t recommend this species enough. Just make sure you’re ready for the commitment and workload that comes with this beautiful animal.