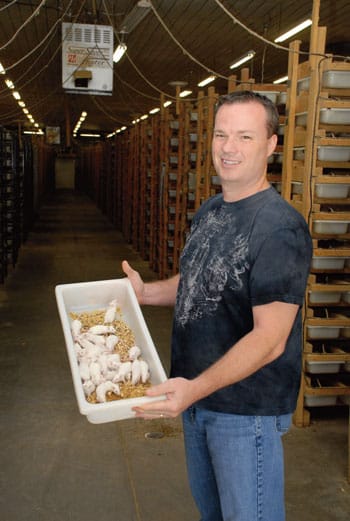 Who's Who In Reptiles: John Callaham

Fascination with reptiles turns to innovation.

Several gasps could be heard throughout the room. John Callaham looked around and smiled. More than a few faces had gone pale during his announcement that on the other side of the 4-inch wall was a room that held more than 500,000 mice and 100 snakes. It took his guests a few minutes to digest that bit of information. 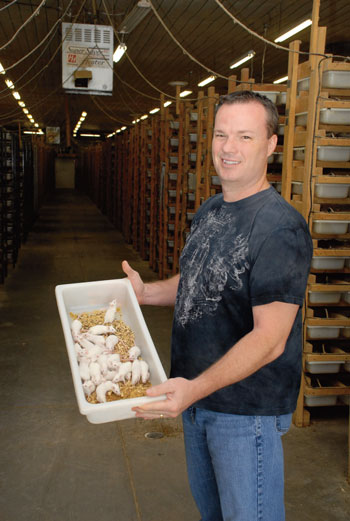 For the grand opening of the new MiceDirect building in Cleveland, Ga., John and his partner, Heath Biggers, decided to be proactive with the community and hold a catered party. They invited local politicians and business owners into their doors, and once the shock of their announcement wore off, they offered to let their visitors see inside the rodent house and snake room. This was their chance to show the community that they were not opening up a little shop of horrors, but rather a clean, well-run business that would be a responsible, positive addition to the town. It would mean local jobs and it would be held to a high standard.

"This was my end goal,” said John, "and it was a lot of fun, during the process, seeing the awful facial expressions turn to intrigue and respect for what we were doing in our community. We have not had one problem with our county, but on the contrary, we’ve been given a lot of support.”  Like many great ideas, John Callaham’s business grew out of the desire to meet an unfilled need. Through his friend and later business partner, Heath, John noticed that the reptile community sometimes struggled to find the quality rodents required to keep their breeding stock healthy and viable.

Since starting their business more than a decade ago, the two businessmen have grown MiceDirect into a large operation that services reptile enthusiasts and breeders around the world.

"It is very rewarding to receive calls from other breeders stating that our feeders have bulked up their reptiles like no other feeder rodent. I take a lot of pride in the product we sell. It is what I use on my reptiles, and I make no differentiation from what I feed to my reptiles and what I sell to my customers.”

Maintaining and growing such a large operation is far from easy. "We are constantly looking for health issues to avoid, monitoring the overall health of the house, and rotating and culling mice to keep the numbers rolling. It is arduous, and it takes laser-beam focus to keep the house healthy,” says John.

Each year they manage to expand. In fact, he has not only added to his own collection of ball python morphs, but John has also just completed a new wing in the mouse house. They expect rodent production to be up by 35 percent this year, and they’ve also pushed into a new territory: insects.

"We are selling frozen red-runner roaches, which guarantees 100-percent consumption, with no waste, smell or loose bugs in the house. The reptiles respond perfectly to the red-runners that were frozen, as seen on our video at micedirect.com. So not only is it more economical, it is very nutritious and makes it easier to feed insects.”

When looking to the future, John continues to remain enthusiastic. "I am amazed at the constant growth of the reptile industry and very pleased to see the ownership of reptiles to be much more accepted, rather than being looked on as freakish. This has come about by persistent business owners and breeders of the past and present who have paved the way for many to enjoy and earn an income doing something both unique and very interesting.”  REPTILES