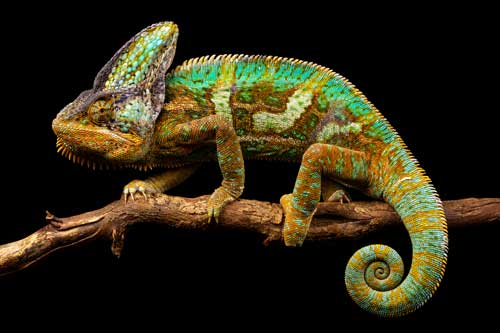 Originally from Saudi Arabia and Yemen in the Middle East, the veiled chameleon, also known as the Yemen chameleon, is a relatively large chameleon species that is well suited for the first-time chameleon owner. While its native range may produce images of dry deserts, the veiled chameleon actually lives among coastal mountain slopes that experience significant rainfall or in slightly more arid valleys with year-round water and vegetation. More recently, the veiled chameleon has been introduced and established small populations on the island of Maui in Hawaii and in Florida.

A well cared for and healthy pet male veiled chameleon can be expected to live six to eight years. Females, on the other hand, usually average four to six years. The difference in longevity is because even when they have not bred, female veiled chameleons will still produce infertile clutches of eggs, much like chickens. This takes a lot of energy and wears out the females over the years.

It is best to keep veiled chameleons individually in their own enclosures after they reach sexual maturity at around 8 to 10 months of age, to avoid potential stress and fighting. Veiled chameleons do best in screen-sided enclosures because of the increased airflow. Glass aquariums, on the other hand, are difficult to find in the appropriate sizes, and they create stagnant air that can lead to upper-respiratory infections in veiled chameleons. 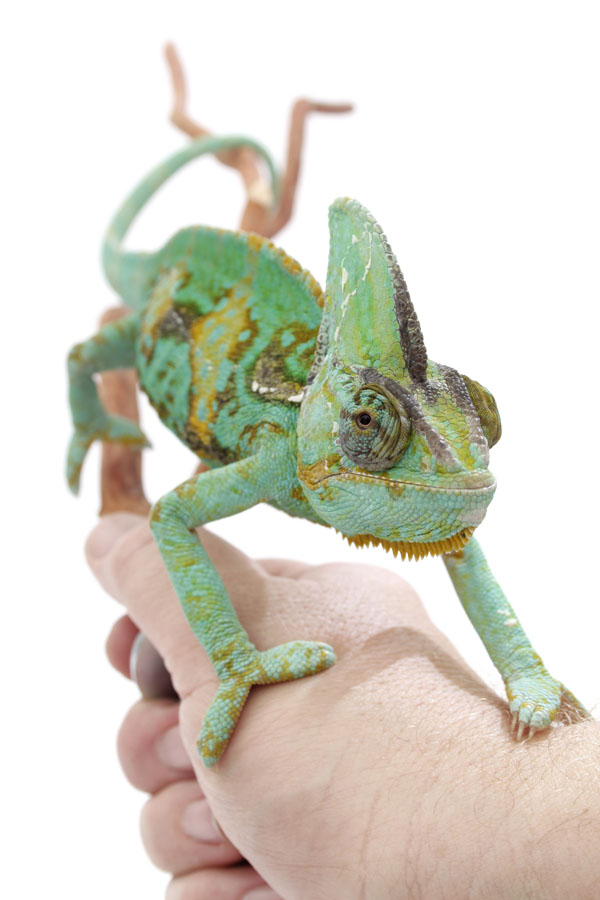 The tall casque on the head of a veiled chameleon helps with hydration: water that collects on it trickles down to the chameleon’s mouth.

If you are purchasing a baby or juvenile veiled chameleon, it is best to start with a small enclosure and then move up to a larger cage when the chameleon gets older. Babies and juveniles can be kept in smaller screened enclosures measuring 16 inches long by 16 inches deep and 30 inches tall until they are approximately 8 to 10 months old, at which point they will need to be moved into one of the larger enclosure mentioned previously.

The interior of a veiled chameleon enclosure should be furnished with medium-sized vines and foliage for the chameleons to hide in. The vines provide important horizontal perches, and your chameleon will rest, bask and travel upon them. Synthetic plants with plastic leaves (not silk) can be used together with common, non-toxic plants such as Ficus, Schefflera, Hibiscus and Pothos; these live plants will provide cover and also help to maintain humidity inside the enclosure.

I do not recommend any type of particle substrate for the bottom of a veiled chameleon enclosure. Such substrates may result in impaction if they are accidentally ingested, or provide a hiding place for uneaten feeder insects. They may also harbor bacteria and fungus. The floor of the enclosure can be kept bare or covered with a layer of paper towels, instead, which should be changed regularly.

Veiled chameleons need two forms of light for approximately 12 hours a day. First, they need a light that will serve as a heat source, so they can bask and regulate their body temperature. Heat rocks, heat tape, ceramic heat emitters and other similar heating devices will not provide veiled chameleons with a heat source they will recognize, so it is important to provide them with a basking spot using a heat bulb and an incandescent fixture. 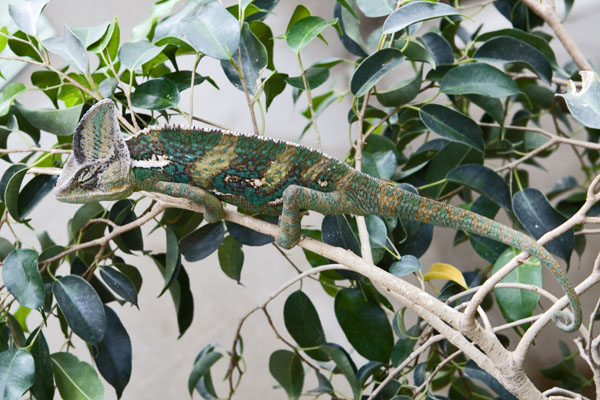 Foliage is a must for a veiled chameleon enclosure. Not only do plant leaves, whether real or artificial, provide cover and security, but veiled chameleons obtain their water by drinking droplets off leaves after a misting.

They also need lighting that will provide UVB, to ensure proper calcium absorption and avoid conditions such as metabolic bone disease (MBD). This can be provided by natural sunlight for chameleons kept outdoors. For indoor chameleons, use a full-spectrum fluorescent tube. Keep in mind that UVB rays are filtered out by glass, so place the full-spectrum light on top of the screen top of the enclosure, with the closest perches positioned approximately 6 to 8 inches beneath it. Follow manufacturer recommendations when it comes to replacing these bulbs, as even though they still emit light, their UVB can wear out over time.

Veiled chameleons, like other reptiles, regulate their own body temperature and it is important to provide them with a temperature gradient inside their enclosures. The best ambient temperature for veiled chameleons during the day is room temperature, between 72 and 80 degrees Fahrenheit. By placing the heat bulb approximately 6 to 8 inches above a perch inside the enclosure, a basking spot of approximately 85 to 95 degrees should be achieved. This results in the warmest temperatures directly under the heat bulb and cooler temps lower down in the enclosure, so your chameleon can position itself wherever it feels most comfortable.

Veiled chameleons do well with a nighttime temperature drop, so no additional heat source is needed at night as long as the enclosure temps are above the mid to high 40s and the chameleons are able to bask beneath the heat bulb in the morning. If your night temperatures do necessitate a heat source, it is important to use one that does not emit light, such as a ceramic heat emitter utilized from a safe distance to avoid burning your chameleon.

Veiled chameleons can be fed a staple diet of crickets that are as long as your chameleon’s head is wide. Baby and juvenile veiled chameleons should be fed once or twice a day, with almost constant access to food. As they get older, you can feed them slightly less often. Adults can be fed every other day. 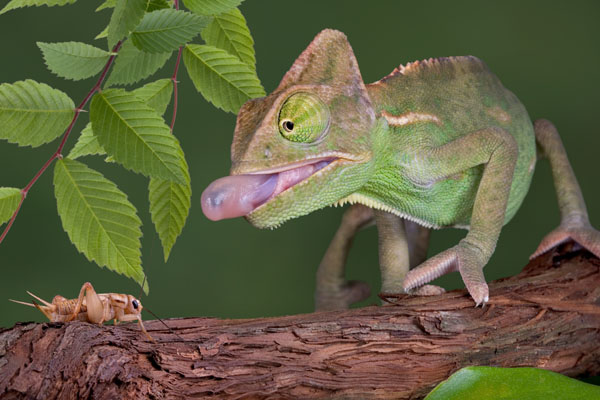 Feed veiled chameleons crickets, and increase their nutrition value by dusting with a calcium/vitamin supplement (especially important for breeding females and juveniles) as well as gut loading.

It is important to supplement your crickets with calcium and vitamins to help promote your veiled chameleon’s proper growth and health. This is especially important for breeding females and growing babies and juveniles. For babies and juveniles, dust their crickets with calcium two to three times a week and with vitamins once every two weeks. This dusting regimen can be decreased for adults. To make crickets more nutritious, which will ultimately benefit your veiled chameleon, gut-load them with nutritious foods such as collard greens, mustard greens, squash, orange and/or commercial cricket diets.

Being arboreal, veiled chameleons do not typically encounter standing water such as that found inside a water dish. As a result, they typically do not recognize dishes as a source of drinking water. They drink water from morning dew and rain that has fallen onto leaves, so it is important to mist your veiled chameleon enclosure with a spray bottle twice a day for approximately two minutes, including all the leaves and branches in the enclosure. Your chameleon will lap water up from the leaves. You can also purchase a drip system, which will allow water to slowly drip out of a water container over a period of time, spattering onto the leaves below. 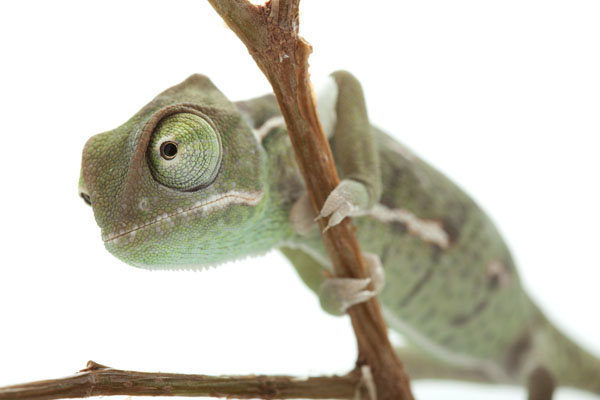 An enclosure with plenty of climbing branches that measures 16 inches long by 16 inches deep by 30 inches tall works well for a baby veiled chameleon.

Veiled chameleons are sexually mature between 9 and 12 months of age. Provided the chameleons are healthy and have attained a reasonable size, they can be bred at this age. Introduction of the female to the male’s enclosure typically results in a courtship display from the male and subsequent breeding. 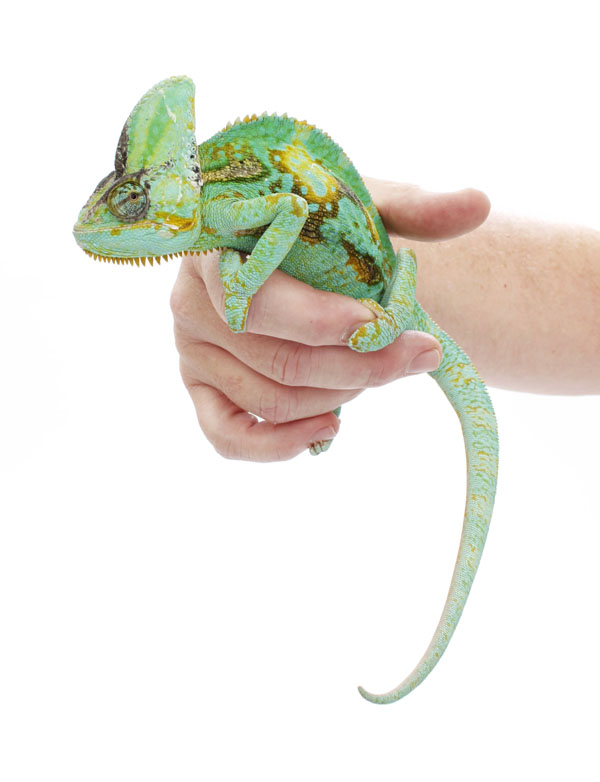 Veiled chameleons are one of the largest chameleons available in the pet trade. Adult males may attain 2 feet in length.

When introducing two chameleons for breeding, it is important to keep an eye on them at first, to make sure there are no signs of aggression. If the female is receptive, she will allow the male to approach and copulate with her. They may copulate a number of times before the female begins displaying dark and colorful patterns, indicating that she is gravid and not receptive to further breeding.

After an approximately month-long gestation period, the female will begin pacing her enclosure, looking for a place to lay her eggs. At this point, she should be placed in a laying bucket (a 5-gallon bucket works well) containing about 8 inches of a 1:1 sand-to-fine peat mixture that is just moist enough to allow the female veiled chameleon to dig a tunnel without it collapsing. After she has laid the eggs, they can be removed from the laying bucket and placed into a sealed Tupperware container with a 1:1 vermiculite-to-water-by-weight mixture. Place this Tupperware container in a dark closet or drawer where the veiled chameleon eggs can incubate at room temperature (71 to 84 degrees Fahrenheit). The eggs will incubate for five to 10 months before hatching.

Michael Monge is the source for veiled chameleon information and breeding. Please visit his website at www.FLChams.com.