In the 1960s I remember fantasizing with my fellow herp buddies about when the first albino reptiles might appear. We wondered if albino California kingsnakes, ball pythons or even leopard geckos would be a reality in our lifetimes.

It turned out that the albino leopard gecko was female, Rosie, and her sibling was a normal-looking male leopard gecko. I kept in touch with the owners of this rare gem for a year and helped them with breeding ideas, genetics and a marketing plan. 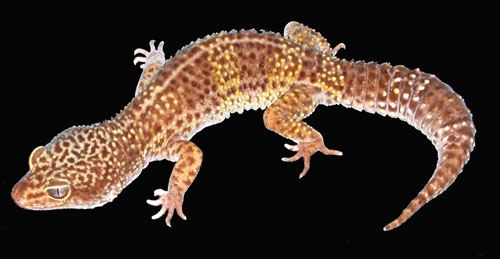 In October 1997 I learned that they did not have any luck breeding Rosie with her brother. They wanted to sell me the pair of leopard geckos. A meeting was immediately arranged, and a purchase-royalty contract based on any successful commercial propagation and sales of the first albino leopard geckos was signed.

I’ll never forget seeing Rosie for the first time. She was smaller than I expected and not showing any ova through her belly wall at 1 year of age. Her owners said she had been sick during the year, so before signing the purchase contract, I mentioned that it was unlikely Rosie would be the founder of the first albino leopard geckos. I was betting on her brother for success. After all, based on Mendelian genetics, he had a 67-percent chance of carrying the albino gene.

Upon returning home, I set up the pair in quarantine and decided to keep the project totally secret. Rosie showed signs of appetite loss after three weeks, and her health failed rapidly. Despite my best efforts, Rosie died, leaving the entire albino project on the shoulders of her brother, who I named Bubba.

Bubba Gets His Chance

An 18-month-test-breeding plan was conceived to determine whether Bubba carried the albino gene. In the spring of 1998 he was bred to 20 of my best designer leopard gecko morphs: tangerines, stripes, reverse stripes and jungles. Because incubation temperature can control the sex of leopard geckos, I controlled the resulting offspring to be approximately 10 males and 150 females.

Late in 1998, I began the laborious task of breeding Bubba back to his 150 daughters. Daily grading of follicle development in each female was necessary, so females could be bred to their father in the proper order, thus reducing the chance of infertile eggs. Cage by cage Bubba was moved each day to a new trio of his offspring, and soon some 1,200 eggs were incubating.

In mid-April 1999 my eyes fixed on the albino-project egg boxes in the large incubator. The very first egg of the test-breeding project had hatched. To my amazement there lay an albino leopard gecko hatchling. I was in complete shock and celebrated our secret triumph.

Mathematically, a breeder could expect 150 albinos from the 1,200 eggs, and during the next few weeks some 155 albinos emerged. The world’s first captive-bred albino, soon named the “Tremper albino” by the herp community, debuted during the summer of 1999. I let out 100 adults that year, and to this day the Tremper albino leopard gecko line is the most commonly occurring strain with some tens of thousands of descendants worldwide from Bubba, the grand patriarch.

Bubba is still alive and producing young again this year. It is hard to imagine that his hidden genes have given rise to the Tremper albino, super giant, carrot-head, aptor and raptor mutations, and much more in the field of morph development. He is truly the Cinderella story of leopard gecko breeding.

Want to read the full story? Pick up the October 2009 issue of REPTILES, or subscribe to get 12 months of articles just like this.