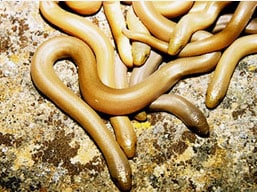 I spotted a small, brown snake coiled on some lichen-covered rocks. As I reached down and picked it up, the snake neither attempted to bite nor crawl away. Instead, it flicked its forked tongue several times and slowly crawled around my hand and wrist. After several weeks of looking, I'd finally captured one these elusive boas.

I looked up at the maple trees that were starting to turn bright red-orange, as they do every September. My search for this boa was not in a tropical rain forest, but in the mountains of southeastern Idaho. For this was a rubber boa (Charina bottae), a relative of the popular boa constrictors and anacondas of the Amazonian rain forest, and it can be found throughout the foothills and mountains of the northwestern United States. 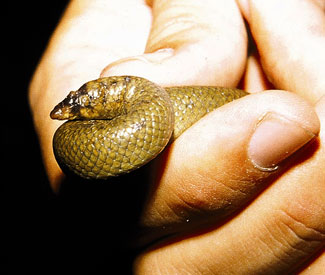 This rubber boa sustained a tail wound while defending itself. The predator was probably thwarted by the release of a strong musk.

Unlike anacondas, which may reach 25-foot lengths and qualify for roles in Hollywood horror flicks, rubber boas are small (no more than 2 1/2 feet long), secretive snakes that few Idaho residents have heard of, much less seen.

Like their relatives, rubber boas kill by constriction, with prey usually mice or shrews. They will wrap their coils around their prey until suffocation or cardiac arrest ensues. Rubber boas, named for the rubbery look and feel of their skin, are sometimes called two-headed snakes because their short, blunt tails resemble their small heads.

My wife and I moved to Idaho during the summer of 1990 so that I could study snake ecology with Dr. Chuck Peterson, a professor at Idaho State University and one of the world's leading experts on the physiology and ecology of snakes. My main goal was to understand how snakes survive in extreme environments. In Idaho, that meant studying their thermal biology, and the rubber boa seemed like the ideal candidate for study. 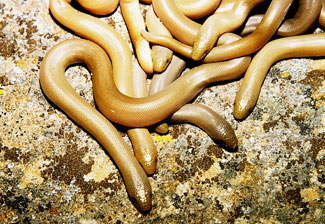 This litter of rubber boas displays the typical light coloration of the young.

Most snakes biological functions, such as crawling speed, digestion and development, are greatly affected by body temperature. Consequently, most snakes in temperate climates are active during periods of the day when they can achieve high body temperatures that optimize these functions.

The few anecdotal reports that exist indicate that rubber boas are active mostly at night when environmental temperatures in Idaho frequently drop below 60 degrees, even in the summer. I wondered if they were really active at such low temperatures, and if so what effect these low temperatures would have on their ability to capture prey and escape predators.

To find out, I needed to know how the body temperatures of free-ranging rubber boas changed throughout the day and night and how temperature affected their important biological functions.

I would spend the next three years (1990 to 1993) tracking the movements of 14 rubber boas and recording their body temperatures in the field.

Based on my lab tests, this nighttime activity at such low body temperatures would result in a reduction in crawling speeds of 60 to 90 percent. The combination of my field and laboratory results appeared contradictory to the prevailing view that reptiles are active at warm temperatures that allow them to crawl at higher speeds. 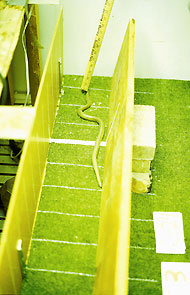 This racetrack was used by the author to study the correlation between body temperatures and crawl speeds in rubber boas.

So, why were rubber boas active at low temperatures that reduced their maximal crawl speeds by about one-third? It required an understanding of the potential benefits of nocturnal activity, as well as some knowledge of the defensive and hunting strategies of rubber boas.

Although being active at night reduces the crawling speeds of rubber boas, nocturnal activity has its advantages, such as decreasing the chances of being seen by predators.

If discovered and attacked by a nocturnal predator, such as an owl or badger, rubber boas usually do not try to crawl away. They don't even try to bite. Instead, they form their bodies into a loose ball with their heads protected in the center. The blunt tail, resembling another head, is simultaneously raised and used to thwart predators by pretending to strike. If the tail is grabbed, the boa releases an incredibly foul-smelling (and presumably foul-tasting) musk to further discourage persistent attackers.

So, because they usually do not use speed to escape from their enemies, a significant reduction in crawling speed may not be important to a rubber boa while active at night. In fact, moving at slow speeds may even reduce the chances of being seen by some nocturnal hunters.

Being nocturnal may also increase a rubber boa's chance of getting a meal. All indications are that rubber boas ambush their prey, primarily small rodents and shrews, which are more active at night. In addition to being ambush hunters, they are apparently expert nest raiders, wreaking havoc on baby birds and mice. Neither of these foraging strategies, ambush hunting or nest raiding, requires speed. Even if a rubber boa does not get a meal, it is probably not a big deal for them because they routinely go for long periods without eating. 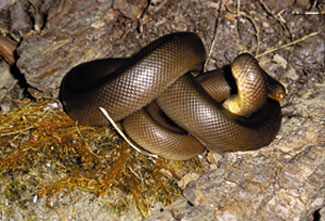 When threatened rubber boas will ball up in a defensive posture. Its exposed tail acts as a faux head that can make striking motions to ward off predators.

During the course of my research, pregnant rubber boas apparently did not eat at all during the year in which they gave birth and might even go for more than 18 months without eating. Consequently, because they do not need to crawl fast for capturing prey nor for defending themselves, moving slowly while active at night probably does not pose a problem for them.

Because rubber boas are so slow, being active at night may offer them another advantage. If they were active during the day, the distance they could move would be short because of the potential for them to overheat in the sun. At night, with no threat of overheating, they could be active for extended periods of time, even though it might take them considerably longer to move from place to place.

As I released the little boa I found on that memorable September day, I wondered what I would learn while studying the biology of these fascinating reptiles.

Three years later, standing in the same spot, I thought about the days spent radio-tracking these snakes and wondered where they would take me next. I also thought about how understanding the way these animals defend themselves and capture their food gave me insight into an apparent contradiction in reptile biology.

It still amazes me how a slow, little boa constrictor, one that won't even bite to defend itself, makes its living in the mountains of Idaho.