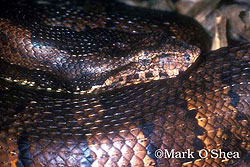 The most common snake inhabiting coconut husk piles on Karkar Island is the New Guinea ground boa, a sedentary, stout-bodied snake, which is called ‘sleepy snake’ in PNG and ‘viper boa’ in the reptile trade. This is the westernmost and probably the most advanced of the of the Pacific boas which evolved in Samoa-Fiji region and radiated westwards as far as the Moluccan islands of eastern Indonesia. Although inoffensive and inclined to adopt a ‘balling’ position when disturbed, the occasional large ground boa will strike and deliver a painful bite. It was easy to differentiate between males and females on Karkar Island because females lack cloacal spurs although this characteristic is not necessarily uniform across the range of the species.

Taxonomic note: Two subspecies may be recognized as follows.

In addition, a single New Ireland juvenile compared with several juvenile Karkar Island specimens, was found to be of more slender build, have a longer tail, a raised vertebral ridge and lighter coloured eyes but all those characters are relative and the sample was small.

Bustard H.R. 1969 Defensive behavior and locomotion of the Pacific boa Candoia aspera, with a brief review of head concealment in snakes. Herpetologica 25(3):164-170.

McDowell S.B. 1979 A catalogue of the snakes of New Guinea and the Solomons, with special reference to those in the Bernice P.Bishop Museum. Part III. Boinae and Acrochordidae. Journal of Herpetology 13(1):1-92.