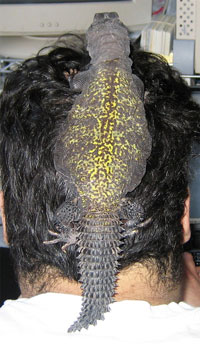 The Lizard Language Of Love

I was first captivated by the uromastyx only a few short years ago, when I first saw one in a pet shop while stopping in to buy some crickets. I instantly fell in love with this creature, as he turned his head to look at me as I approached his cage. He was mostly black in color, with bright yellow markings down his back and a large, spiked tail. I asked if I could handle him and inquired if this fascinating lizard was a uromastyx as I had guessed. I had only a limited knowledge of them at the time and had never seen one in person. I found out that he was a Mali uromastyx. I held him and I was pleasantly surprised to find that he was toasty warm, like a friendly hot potato with a spiky tail. That sealed the deal, and I knew that this was the lizard for me. Because I had no previous experience with this type of lizard, I went home and researched uromastyx for weeks, trying to find out everything that I could about them. Ready at last, I went back to the store. He was still there, so I knew that it was meant to be. I named him Firestone, because of his rock-like coloration and very high body temperature.

Several months down the road, I found Firestone a female companion; another Mali uro, at the same petshop. She was much more shy, but they still got along just fine. I named her Yakibo. A couple of years later, Firestone passed away, and then it was just Yakibo. She became more reclusive, and would dash into her cave whenever I came near. Although she never tried to bite, she would hiss at me when I cleaned her cage or fed her. She seemed grumpy, her appetite diminished over time and she became a very finicky eater. I worried about her as she lost weight and I thought that she could be lonely, so she might benefit from a new lizard friend.

In early March of last year, I went to a reptile show and found a bright yellow Saharan uromastyx. Inside of a large enclosure, he emerged from a roaming crowd of various uros, looked right up at me with his beautiful golden eyes and licked my hand. Because of his great personality and looks, I named him El Guapo. I figured that if anyone could make Yakibo happy, then this was the lizard for the job! It turned out that I was right. She began to eat more food than she had ever eaten before, gained back the weight she had lost and became friendly towards me again. She seems to have really taken a liking to El Guapo and they get along very well. They eat breakfast together every morning, and sit under the basking light side by side, sometimes with their arms around each other. Yakibo shows him her affection often, by flipping on her back and exposing her belly to him. I nearly had a heart attack the first time I found her like this, motionless on her back, until she saw me coming and quickly flipped back over again. Once I remembered to start breathing again, I was happy to see that they were just speaking the lizard language of love!

I consider myself quite fortunate to have had past and present uros in my life, and plan on enjoying these spiny-tailed treasures for years to come. These lovable desert-dwellers are packed with personality and make excellent, friendly pets.