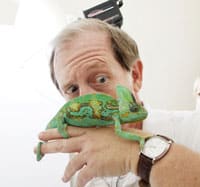 Photographing reptiles at the Reptile Super Show was fun!

One of our company's goals has been to beef up our in-house photo library. Being a publisher of 50+ pet magazines, naturally there is a constant need for photos. These are not just for the magazines, but also for various media needs for the sales department, circulation department, marketing, etc. In the case of REPTILES magazine, as well as its annual sister publication, Reptiles USA, the backbone of the photo contributions has always been our stable of outstanding freelance photographers, such as Bill Love, David Northcott, Zig Leszczynski and many others over the years. In addition, many of our authors supply their own photos to go with their articles. There's no plan to change that, but the company wants to grow its photo library, as well. 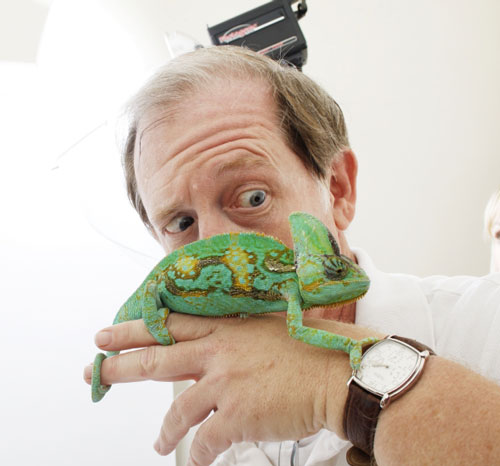 Me and a beauty of a veiled chameleon from Amazing Blue Reptiles.

To do this requires photo shoots, which it usually falls to us magazine editors to arrange. When you take into consideration the number of different monthly animal magazines Lumina publishes, you can imagine some of the fun visits we get to enjoy here at the editorial offices, where the Lumina photo studio is located. For instance, if there's a shoot scheduled for Dog Fancy, that usually means we may get to pet and play with some of the visiting models. As anyone who follows REPTILES on Facebook knows, I'm always encouraging our Facebook fans to outnumber the number of DogChannel fans. But that said, I do love dogs. All kinds of breeds have been here to be photographed, everything from Cairn Terriers and Standard Poodles to German Shepherds and, not too long ago, a pair of huge Saint Bernards. I remember a friendly English mastiff came by once – I think that was the biggest dog I've ever seen in my life. 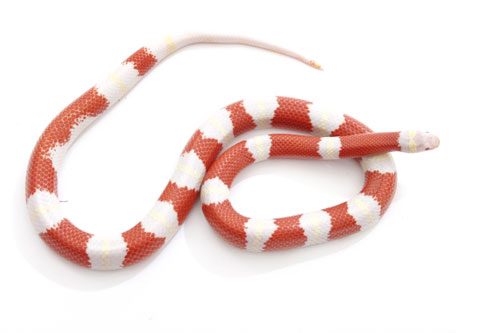 A nifty albino Sinaloan milk snake from the one and only Bob Applegate!

In addition to the dogs, lots of birds, cats and other mammals have been photographed. Reptiles and amphibians, too, though getting herps here can be a little trickier. Some people we approached weren't thrilled about the idea of bringing their animals  – some herps are delicate and may be easily stressed, after all – but despite this, we have had some successful photo shoots here at the office, most notably when Mike Barnes, who was with California Zoological Supply at the time, brought a bunch of reptilian models in.

It had been awhile since that shoot, though, and I wanted to find a way to have a major shoot that would result in the largest diversity of photos possible. That was when I hit upon the idea of having a photo shoot at a reptile show. It could be perfect. There would be lots of breeders all in the same place, with many different types of animals. As long as a show's promoter was willing to let us set up a portable photo studio, and as long as we were able to find some vendors who were willing to loan us animals to photograph, it seemed like a natural venue for a successful photo shoot. And as a way of saying thanks to any vendor who participated, we would give them a photo credit in the magazine any time a photo of one of their animals was used – this would be good publicity for them – as well as a free classified ad on the website. So it seemed like a win-win situation to me. 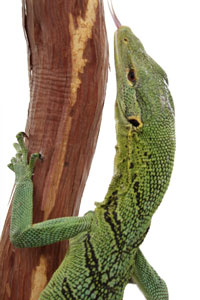 This emerald tree monitor, on loan from LLL Reptile, startled our photographer momentarily after leaping off a branch.

The Reptile Super Show in San Diego was coming up, and promoter Ramy Guirguis gave us the green light to go ahead with our plan (thanks again, Ramy!). Thus it was that our maiden on-location reptile-show photo shoot took place there, when on Saturday, June 18, the REPTILES Photo Shoot Brigade descended upon San Diego. Included were myself, REPTILES Managing Editor Stephanie Starr, ReptilesMagazine Managing Web Editor John B. Virata, REPTILES Sales Manager Sandy Quinn, Editorial Director Melissa Kauffman and BowTie Studio Manager Gina Cioli, who would be the one manning the camera. Upon our arrival Ramy showed us where we could set up our camera and lights behind the scenes, away from all the show activity so the camera flash would not disturb anybody, but with easy access to the show floor. 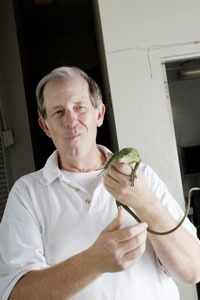 Note to self: Remember to bring gloves to future photo shoots in case of pointy lizard toenails.

Prior to the show I will admit to some trepidation about how the vendors would respond to the photo shoot idea. What if nobody wanted to provide any animals? That would suck. On the day before the show, Sandy spoke to some who were willing to participate, and it was to their tables that we went first on Saturday. Well, suffice it to say that I had wasted my time worrying. We had a great day, and a productive one, too! All the vendors we approached were happy to loan us terrific animals to photograph, and we ended up taking more than 1,300 photos of more than 50 different species at the show – and this was photographing animals supplied by only eight vendors! A huge thank you goes out to Jon Levey from Jon's Jungle, Jim and Mari Nozaki from Amazing Blue Reptiles, Loren Leigh from LLL Reptile, Ross Adcock, Bob and Marilee Applegate from Applegate Reptiles, Randy Wright, Linda Davison from Sticky Tongue Farms, and Yusuke Murai from Samurai-Japan Reptiles for providing us with plenty of cold-blooded models to photograph.

I was very happy at how receptive these vendors were to the REPTILES photo shoot. They loaned us any animals we wanted, and had great suggestions for which ones we might want to photograph, as well. Jon from Jon's Jungle, and his wife, Diane, were particularly generous. “What about these bearded dragons? How about this ball python?” Jon kept volunteering animals right and left. We probably could have spent all day photographing just his. Everyone else was just as helpful.

Let it be known that Lumina Studio Manager Gina Cioli is a trouper. Gina is not a “reptile person,” even though she's willing to photograph them. Most of the time during a shoot I'm the reptile (or amphibian) wrangler, handling the animals. I feel it's better that this responsibility rests with me, especially when we're photographing animals that are valuable. I told you the vendors were generous, and several of the animals they lent us were worth thousands of dollars, including cool python morphs of various species, green and blue tree monitors, etc.

Speaking of the monitors, there was one exciting moment when a green tree monitor on loan from LLL Reptile leaped off a branch it was posed upon, fairly high into the air. I caught it in mid flight, luckily (and I might add here, that it had very sharp nails. . . ouch!). Anyway, any time a snake or lizard made a sudden move toward Gina, this would cause her some moderate consternation. Most “exciting” to her was the aforementioned green tree monitor, and a large rainbow boa that Randy Wright lent us, which seemed interested in always crawling directly toward Gina at a fairly rapid pace. One time she backed up so suddenly I was afraid she'd trip over some of the equipment. But all went well and there were zero mishaps. We're always extremely careful when photographing any animal. 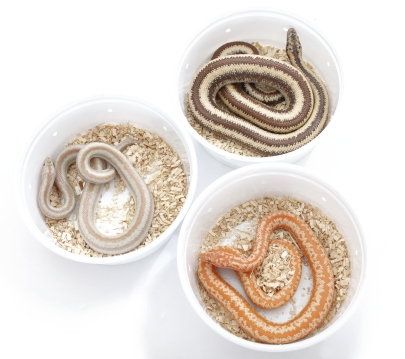 An attractive assortment of rosy boas provided by Randy Wright.

The lights that we were using had a tendency to warm up the animals, and some of the snakes and lizards became quite active. The ones that stick out most in my mind now, a month later, were some knob-tailed geckos from Jon's Jungle and a selection of beautiful milk snakes from Bob Applegate. Those suckers were on the go! Eventually I realized that our best bet to photograph some of the more active snakes was to first place them, size permitting, beneath an upside-down white deli cup or inside one of the hides we had brought with us, and let them relax a bit. After a minute or so, I would count to three, lift up the cup or hide, and while the snake was coiled photogenically and before it began slithering again, Gina would quickly snap some photos. We got some pretty awesome photos that way. Next time we'll bring something larger so we can contain some of the larger snakes in the same fashion. Unfortunately, this go-round, it was impossible to get good full-body shots of some of the larger snakes we photographed, because our background wasn't large enough. Live and learn! 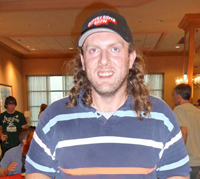 Justin Hiykel from Tarantula, Inc./Turtle, Inc. was a great guy who will be missed in the reptile and invertebrate communities.

The photo shoot was so successful that the plan now is to make it a semi-regular event at some of the local reptile shows. As of this writing, the next one will be, coincidentally, the Reptile Super Show in Pomona. Ramy has already given us his approval, so if things go according to plan, maybe you'll see us weaving our way among the crowd, being careful not to jostle our newest models too much as we tote them back and forth to our photo-staging area. Here's hoping! And be sure to watch the slideshow chronicling the big day of our photo shoot in San Diego below!

Although we had a great time photographing all the reptiles, the day was tinged with sadness, too, after I was told of the sudden tragic death of Justin Hiykel of Shelby Reptiles/Tarantula, Inc./Turtle, Inc. just a couple of weeks before the show. Justin, his fiancé Theresa Westfall and their booth have been fixtures at many of the shows I've attended over the years. Despite Justin's passing, Theresa and the Tarantula, Inc/Turtle, Inc. booth were at the San Diego show, just as I'm sure Justin would have wanted them to be, and I regret I didn't get a chance to offer my condolences to Theresa in person at the show. But I wanted to say here that I always enjoyed chatting with Justin, if only briefly while he was busy at his booth during a show, which is how I usually found him. He was a very nice guy who obviously knew his stuff, and I'm sure he's going to be sorely missed in the reptile and invertebrate communities.

At The Reptile Super Show in San Diego, we ended up taking more than 1,300 photos of more than 50 different species at the show.