Check out the English grass snake.

Eleven subspecies of grass snakes are recognized, the subspecies occurring in the British Isles (not Ireland), France and northern Italy being known as Natrix natrix helvetica. However, the central Italian populations, from which specimens imported into the UK as pets in the 1960s were probably drawn, is now separated from N.n.helvetica as N.n.lanzai. Grass snakes do not do well in captivity, although, the Italian specimens could at least be convinced to feed, unlike their British counterparts. The typical English grass snake has a yellow and black colour behind its head but this may be obscured or indistinct in some populations. 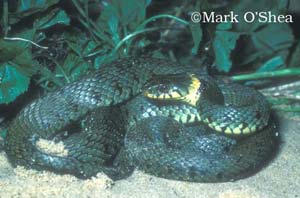