Other than the red tegu (Tupinambis rufescens), there are two other tegus available in the trade that are often confused with one another. Colombian tegus (Tupinambis teguixin) are also called golden tegus, black tegus and sometimes Colombian black and white tegus, despite the fact that they are not true black and white tegus. Dealers trying to confuse the public into thinking they were the more expensive Argentine tegus (Tupinambis merianae) several years ago changed the common name. 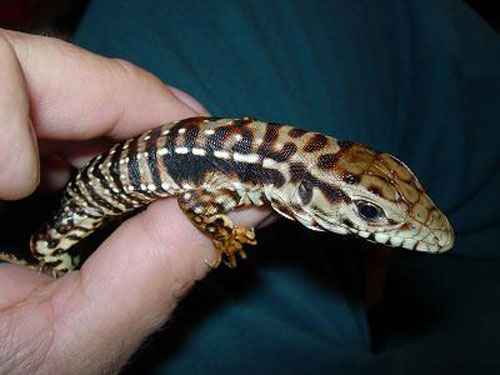 The Red Tegu, seen here, is the more common tegu compared to its easily confused cousins, the Colombian and Argentine Tegus.

Let me try to help with the confusion on these two tegu species.

Argentine tegus have a lateral line that runs down the side of the body, starting at the eye. This line is usually lighter in color than the black markings found on the body. They have beaded skin, and two loreal scales. Loreal scales are the scales between the nostril opening and the eye on tegus. In the Argentine tegus, they have two of these scales. As a rule, Colombian tegus have only one large scale. However, this rule can vary in rare cases. I have some pure Argentines with one scale; it is not unknown to happen. Colombian tegus also have smooth skin, and they do not have the lateral line.

In addition to appearance, there are a few other differences between these two tegus.

Red tegus are one of the most intelligent reptiles found in our hobby. They get quite tame and are rewarding to keep. As with any animal, it is best to do your research before purchasing one. By providing them with the right habitat and diet, you ensure that your captive will remain healthy for many years to come.

Want to read the full story? Pick up the February 2011 issue of REPTILES, or subscribe to get 12 months of articles just like this.