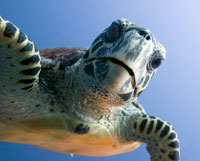 My June 9 blog was about the eating of turtles, a sad enough state of affairs. Today, as I was reading through a collection of reptile-related articles, I was reminded of another sad reality: turtle sacrifice.

The short article I read today was about a large softshell turtle, a specimen of Nilssonia hurum, which was sacrificed in India last April. According to the article, on April 26 a local tribe of the Naogaon District in Assam, India, sacrificed the turtle to the goddess Kali. Upon hearing of the event organizations, including the Centre for Wildlife Research and Conservation Action (CWRCA), interviewed the journalist who reported on the sacrifice. They reportedly discovered that a community in the Bordowa District of Assam has been sacrificing softshell turtles – known locally as Bor Kacha — every April since 1200 B.C. The investigating groups are now in the process of trying to dissuade the locals from continuing their custom. It will be interesting to see how well they fare.

This wasn’t the first time I had heard about turtles being sacrificed to the gods. In 1995 I came upon the book Turtle Islands: Balinese Ritual and the Green Sea Turtle. This is a lavishly illustrated coffee table book that details the relationship of the Balinese people with the sea turtles. It reveals the tragic plundering of the turtles’ eggs and wholesale butchering of the turtles for food. The sacrificial aspect of the story comes into play in describing Tri Bhuwana, a celebration that is held once every 100 years to, according to the book, “appease the gods and return balance to the universe, a universe man has disrupted.” Green sea turtles and other animals are used as sacrifices to the deities. After describing the events of the festival from the beginning, and the interesting rituals associated with it, author Charles Lindsay goes on:

Finally the climax. Tri Bhuwana, the great sacrifice to regain divinity, harmonize the world, and purify the macrocosm. The animals are led into a sacred enclosure consisting of eleven structures, symbolizing the cardinal directions of the universe. They are killed swiftly, humanely, and the heads are used to adorn the offerings. The sacrifices are intended to raise each soul one notch, to a higher level in the scheme of reincarnation. The number of green turtles used for these rare great events is negligible, unlike the cumulative slaughter I’ve witnessed for lesser rituals.

I would not endeavor to knock the Balinese culture’s religious beliefs by saying they should leave the sea turtles out of their ceremony. At the very least the turtles in this instance are used in reverence, as opposed to being used to satisfy a Chinese restaurant patron’s wish to maintain a healthy sex drive.

Preferable to actual turtles being sacrificed (in my eyes anyway) is what occurs during the Lantern Festival in the Penghu Islands in Taiwan. During this celebration different representations of sea turtles are offered to the gods, rather than actual flesh-and-blood turtles themselves. A detailed article about this celebration, including many interesting photos, can be found here (it was originally presented as part of the Proceedings of the Nineteenth Annual Symposium on Sea Turtle Biology and Conservation in 1999).