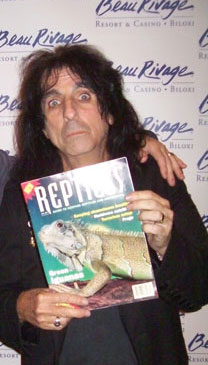 Vivarium de Lausanne needs 250,000 Francs by the end of March to stay open.

American rock star Alice Cooper is donating a portion of profits from his upcoming show in Switzerland to a struggling reptile zoo that is home to the largest collection of venomous snakes in Europe. Cooper, 65, initially contacted the Vivarium de Lausanne to borrow a boa constrictor for his March 14 show at the Caprices Festival in the Swiss Alps. It was then that he learned the zoo is struggling financially. The zoo will close if it doesn't come up with 250,000 Francs by the end of March to pay its debts. "Alice and the promoters were shocked to hear that the Vivarium is in dire financial straits and wanted to help," a festival aid told Britain's Daily Star.

Cooper, who appears frequently on stage in America with his pet python Alice, and the festival's organizers are donating 10 percent of the monies from Cooper's concert to the reptile zoo. For those in Switzerland who wish to donate to the Vivarium can do so by making a payment at any Swiss post outlet via the center's PostFinance account: Fondation du Vivarium de Lausanne, Chemin de Boissonnet 82, 1010 Lausanne, IBAN CH30 0900 0000 1726 2022 4.