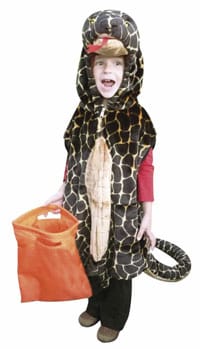 It’s being officially announced in the September issue of REPTILES, but I thought I’d give anyone who reads “Random Neural Firings” a little headstart – the first REPTILES Herp Halloween Costume Craze contest is making its debut this year!

We’ve had many contests over the years. We like having them so readers can strut their stuff to the reptile-loving world, whether they want to show off their reptile-inspired tattoos (via our super-popular Tat Attack! contests) or display their artistic prowess (our latest “Drawn To” REPTILES contest just ended; you can see the winners and runners up here). Others have been given the opportunity to reveal why they think they are the world’s best reptile enthusiast (our 2007 “Ultimate Herpkeeper” contest) or the most in-tune-with-reptiles schoolteacher (2008’s “Creature Teacher” competition).

It’s fun for us editors to hold the contests, too, because of the responses we receive. We get a fair amount of mail from readers, and contest entries are always something special we look forward to poring over. It can be hard to pick the winners, though!

Awhile back I was looking at some friends’ photos, and came across some shots of their daughter in a snake costume she wore for Halloween in 2007. I went trick or treating with them that year, and I remember getting a big kick out of Ava’s costume as she ambled along the sidewalk, clutching her treat bag with the costume’s long tail trailing behind her. Ava was fascinated by reptiles at an early age, helped, I’m sure, by the fact that she lives right around the corner from a great reptile store, Prehistoric Pets in Fountain Valley, Calif., where she is often taken by her parents. This undoubtedly influenced her choice to go trick or treating that year as a snake.

When I saw those photos (my favorite accompanies this blog) the idea for a reptile costume contest was born. Later, upon suggesting the idea, some people at first thought I meant a contest in which people would be dressing up their pet reptiles. Not this time — maybe that’ll be another contest someday. The Herp Halloween Costume Craze contest is for humans only.

Have you ever worn a reptile-themed costume? It doesn’t have to have been for Halloween. And it doesn’t have to be this year’s costume, either. If you once dressed up in a home-made reptile costume for whatever reason (your wedding?), if you have photos you’ll be able to send some in. Or, if you think you’d like to get a head start on this year’s Halloween costume, why not go as a reptile and start making it now? Then you can send in photos and be eligible to win a great prize from one of the contest’s reptile company sponsors.

There will be five photo categories people can enter: infant, toddler, pre-teen, teen and adult. Remember, these are the photo categories. In other words, if you are an adult now, you can still enter a photo of yourself as a baby in the infant category.

Watch for the official REPTILES Herp Halloween Costume Craze contest announcement in the September issue of REPTILES, which will be mailed to subscribers near the end of this month. You can also view the announcement here. But you’ve just been given advance notice, and with that you’ve got the edge on the competition. Don’t waste it!