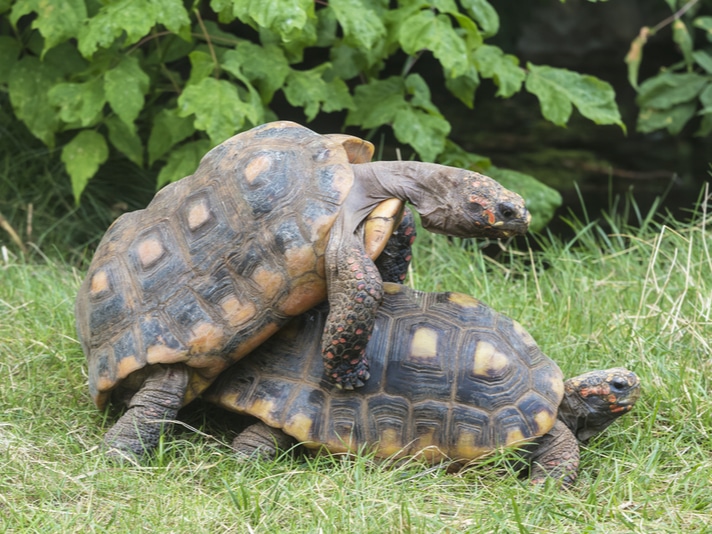 The red-footed tortoise (Chelonoidis [Geochelone] carbonaria) is found throughout much of northern South America. It inhabits savannas and dry forests and, to some degree, humid forests. Sizes vary widely depending on geographic location. Although many adults average around 14 inches straight carapace length, one reaching nearly 20 inches has been recorded. There are also dwarf geographic variants, some of which sport red or orange heads. 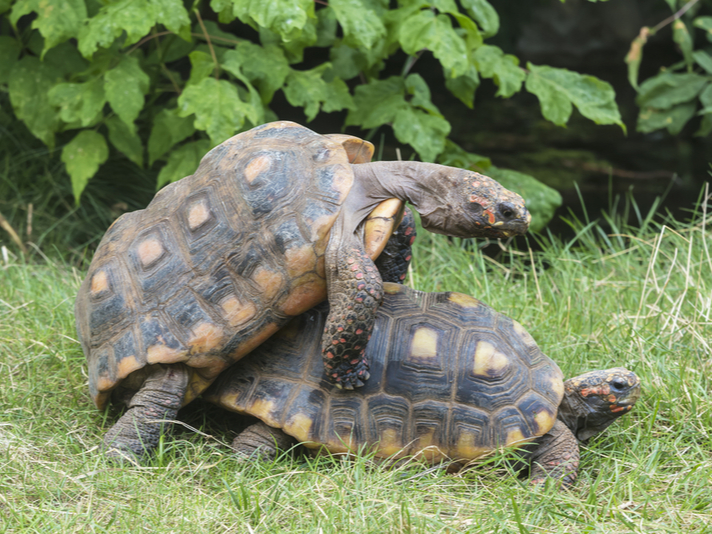 Red-footed tortoises exhibit a diversity of size and color depending on their geographic location. Breeding stock should be as similar in appearance as possible.

The red-footed tortoise has been maintained in captivity for decades, and its popularity can be attributed to its attractiveness, hardiness, personable demeanor and willingness to reproduce.

Red-footed tortoises exhibit a diversity of size and color depending on their geographic location. Breeding stock should be as similar in appearance as possible. Unrelated specimens are preferable but not mandatory.

I recommend only captive-bred red-footed tortoises. Besides relieving exportation pressure on wild populations, captive-produced tortoises have not endured the stress of capture, less-than-adequate holding facilities and international shipping. When properly maintained, captive-bred tortoises should be free of parasites and major health issues.

Although a single pair of red-footed tortoises can achieve reproduction, chances of success greatly increase with a breeding group. Maintaining at least two red-foot males, which can engage in competition, is believed to help in successful reproduction, so a minimum of two pairs is recommended.

All five tortoises of my breeding group (two males and three females) were obtained as hatchlings. The female red-footed tortoises began laying fertile eggs when they were 8 years old.

A minor temperature-cycling period adds to the likelihood of fertile red-footed tortoise eggs. Drop the normal ambient temperature, 80 degrees Fahrenheit, down to 70 or 75 degrees each evening. Restore optimum temperatures, including a 90- to 95-degree hotspot, during the day. If this method is adopted, it can be implemented year round.

Alternatively, a gradual temperature reduction can be initiated in late fall. Drop ambient nighttime temperatures by 2 degrees every few days until an approximate 10-degree reduction is realized. This cycling period can last from four to eight weeks. Then the reverse is employed to reinstate the previous normal temperature.

Courtship begins with male red-footed tortoises becoming alert, active and inquisitive. They quickly move throughout the enclosure and typically engage in at least some same-sex antagonistic behavior, such as head bobbing and nudging. Males may bite females around the head and neck, and on occasion fairly serious neck wounds result. Have a veterinarian treat any lacerations through the skin.

Eventually a male red-footed tortoise approaches a female from the side and then works his way posteriorly until he is in position to mount her. While mounting, as well as during copulation, the male extends his neck and vocalizes a loud, repeated clucking sound. Occasionally the female walks during copulation, and the male keeps up by grasping her carapace with his front legs and walking on his rear feet. Copulation lasts only a few minutes at most.

At the National Zoological Park in Washington, D.C., red-footed tortoise courtship occurred frequently throughout the year. Oviposition took place from June to December with clutch sizes of four to five eggs (Davis, 1979). I also observe courtship within my group throughout the year, and eggs typically are laid in January. I have recorded clutches consisting of three to four eggs. Although I have never experienced a clutch larger than four eggs, in some areas red-foots are believed to lay more.

In the wild, some female red-footed tortoises deposit eggs in leaf litter on the forest floor, but others excavate a nest before laying eggs. Nest size varies greatly, but the average is around 6 inches deep. Although captive tortoises will lay eggs on the enclosure floor, provide a nestbox large enough for the female to easily move around. A ramp easy for her to traverse should be provided. Fill the nestbox with a soil-and-sand or a soil-and-peat-moss mixture that is damp to the touch.

Red-footed tortoise eggs can be incubated a variety of ways. I place them on flat, damp paper towels within a plastic shoebox measuring 12 inches long, 10 inches wide and 4 inches tall. Approximately 60 holes measuring one-eighth inch in diameter are drilled into the ends and sides of the box. A nonventilated lid fits on top.

According to Rundquist (1994), incubation temperatures below 82 degrees produce males, and those above 88 degrees result in female red-footed tortoises. Median temperatures generate a mix of sexes.

The incubation period can vary. Rundquist (1994) states that there is no significant difference in incubation length between red-footed tortoise eggs incubated at 82 degrees and those incubated at 88 degrees. He has observed eggs within a clutch pip more than 50 days after the first egg in the clutch pipped.

Paull (1999) states that red-footed tortoise eggs may take 200 days or more to hatch, if any hatch at all, at incubation temperatures of 82 degrees and below, and this low temperature greatly increases the risk of loss. However, for years I have successfully incubated eggs at 80 degrees. For example, one clutch of three eggs laid in January 2008 all successfully hatched after an incubation period of 144 to 147 days. Additionally, at the National Zoological Park, incubation temperatures of 78.8 to 81.5 degrees produced viable offspring with incubation times of 141 to 185 days (Davis, 1979).

After pipping, the neonate red-footed tortoise may remain in the egg for several days while absorbing most of its yolk sac. Leave it alone. Upon hatching, the hatchling can be placed on a wax paper substrate if the yolk sac is not completely absorbed. The slick surface prevents the sac from rupturing.

Once hatchling red-footed tortoises absorb their yolk sacs, they begin to feed. Food can be endive, escarole, romaine, kale, dandelion greens, squash, carrots, broccoli crowns and a minimal amount of fruit, such as cantaloupe and apple. Six pieces of protein, such as chopped earthworms or moistened ReptoMin, can be offered weekly. Feed hatchlings and juveniles five days per week as much as they will consume in a sitting.

Until hatchling red-footed tortoises are large enough to safely climb in and out of a shallow water bowl with a depth two-thirds the height of the carapace, soak them daily in tepid water for 15 minutes.

Keep young red-footed tortoises in enclosures measuring at least 1 foot by 1½ feet. Newspaper substrate works well. Provide a source of UVB light, a hotspot of 90 to 95 degrees, an ambient temperature of 80 degrees and 80 percent relative humidity.

Soon you’ll come to see why red-footed tortoises are one of the most popular tropical tortoises in the U.S.