I suspect that almost anyone with an Internet connection has seen the images of native Central Americans appearing to poach sea turtle eggs from the beach.

I suspect that almost anyone with an Internet connection has seen the images of native Central Americans appearing to poach sea turtle eggs from the beach. The e-mail has gone around the world in the few weeks before I’ve written this column, resurfacing after a several-year hiatus. I know, for one, that I have received it at least 10 times. The caption that went with this e-mail is as follows:

“Maybe we have just discovered why the sea turtle is going extinct, and it’s not global warming! World shame on Costa Rica! Please distribute widely. The turtle eggs are stolen to be sold. The planet is thankful for the forwarding of this e-mail.”

This is a great example how the Internet can be used to perpetrate hoaxes, rumors and false information. I consulted with Dr. Jeanette Wyneken, Ph.D., a sea turtle biologist at the Florida Atlantic University to verify the facts. 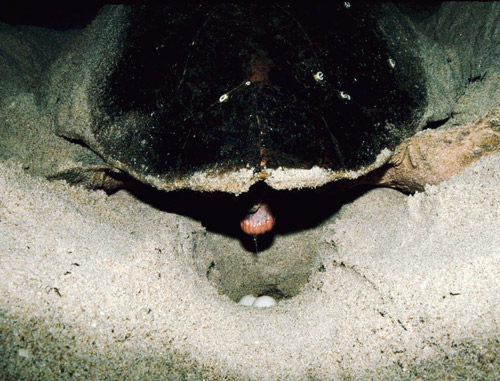 To ensure the survival of more sea turtle eggs for the entire season, eggs in the first arribada are harvested before the second arribada. This is so that turtles will not break the eggs laid earlier and contaminate the sand for the second group of eggs

The photos actually show a legal harvest of eggs in Ostional, on the Pacific coast of Costa Rica. The olive ridley (Lepidochelys olivacea) turtles nest en masse, events the locals call arribadas, where hundreds of sea turtles crawl up on the beach and nest in a discrete area over a two- to three-day time period. Biologists have shown that the majority of eggs laid during the first arribada die from breakage as turtles that nest later accidentally dig up earlier nests. The sand becomes tainted from the bacteria and fungi that develop in the dying, broken eggs. These pathogens then infect any new eggs deposited in the same location.

As a result of efforts dating back approximately 15 to 20 years, the government allowed the local community to form a co-op of egg harvesters to protect the beach and conduct a legal, controlled egg harvest. Eggs from the first crawl of the season are collected, counted and sold legally within the country.

Sea turtle egg consumption is part of the native culture. Some who eat these eggs do so in a red sauce and believe they enhance male virility and act as an aphrodisiac. Others simply like the eggs as an appetizer. Eggs not consumed locally are sold to local restaurants and to exporters, which helps support families and the community.

Although this practice may seem counterproductive, if you take a look at the logic behind it, you’ll see that it is really in the best interest of the sea turtles. The first clutch of eggs of the season is generally doomed from the start. Nesting turtles accidentally destroy one another’s eggs. People, as well as smaller predators, also destroy large numbers.

The second arribada of the season occurs just four weeks after the first. It takes approximately eight weeks for the normal sea turtle nest to hatch, so when the second wave of turtles arrive, they dig up the remaining eggs still in the nests, killing the majority of them. These dead, now-rotting eggs act as an added source of infection to the newest batch of eggs, causing contamination and egg mortality in the second nesting.

Biologists have found that a greater total number of successful hatchings for the entire season occur if the first set of eggs are removed prior to the second set being deposited in new nests on the beach. Additionally, this legal harvest floods the market with legal and cheap eggs. This reduces the market for others to poach eggs from elsewhere.

This type of conservation technique is called “community-based conservation.” Those stakeholders are both the conservationists and the local community members who depend on these eggs for their income.

The locals control the harvest and act as guardians for the beaches and turtles after the legal harvest of nests. By involving the former poachers, they become the leaders in local conservation efforts to protect the turtle eggs, and they realize that they will have future opportunities to continue their cultural practices.

Human encroachment on the limited available beaches for nesting has diminished the real estate available to these endangered species. Creative conservation techniques are needed to protect what is left. The next time you hear about this misunderstanding of the egg harvest on the Internet, please pass this correct information along. The planet thanks you.