The Pet Industry Joint Advisory Council (PIJAC) has borrowed a line from Texas with its new membership campaign “Don’t Mess with My Pet.” The new initiative, unveiled Wednesday, aims to educate the public on legislation that could restrict pet ownership. It marks the first time individual pet owners will be able to join the Washington, D.C.-based organization. 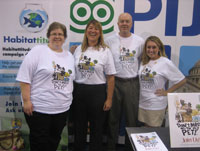 “There are legislative actions out there that are trying to inhibit (the public’s) ability to own pets…we want them to learn about those and get engaged,” PIJAC President Pamela Stegeman said.

As the pet industry’s lobbying group, PIJAC tracks legislation that affects the pet industry, whether on a municipal, state or federal level. The number of pet-related proposals has increased this year, especially in the number of dog-related bills, according to Stegeman. For example, a number of states have introduced legislation that seeks to limit the number of intact dogs or type of breed an individual may own. Some states have proposed measures that seek to increase taxes on animal products or on the animals themselves, Stegeman said. In addition, there has been action on Capitol Hill with the introduction of HR 669, which could affect the importation of many nonnative animal species in the U.S., including most birds, reptiles, fish and several mammals—hamsters, gerbils, guinea pigs and ferrets—commonly kept as pets.

Stegeman said PIJAC believes the public wants to know about such measures and have their voices heard. “They just need to know what’s going on, accurately—to get the truth about it,” she said.

The “Don’t Mess with My Pet. Protect Responsible Pet Owners” campaign is designed to provide the public with the information, education and resources to become active in issues affecting pet ownership.

The public can join PIJAC online at www.DontMessWithMyPet.org for an annual membership fee of $25. Members will receive a “Don’t Mess with My Pet” t-shirt as well as alerts on pending legislation and access to PIJAC’s Legislative Action Center.

To raise awareness of the campaign, PIJAC plans to use word of mouth and viral marketing. In addition, Stegeman said the organization is seeking the assistance of those who mobilized to oppose HR 669. Plans will likely also include social marketing, such as using Facebook.

Including the public as members not only strengthens PIJAC’s grassroots efforts in supporting pet ownership, but also provides the organization with a source of funding, Stegeman said.

“The fundraising aspect is very important for PIJAC to be able to continue engaging in the way that it has been,” she said.

During Wednesday’s press conference, PIJAC’s board chairman Frank Koch said the new campaign will ultimately benefit the pet industry as a whole.