Tiger Snake With Charcot’s Disease Stolen From Keeper’s Home
What Is Up With New Jersey And “Large” Snakes On The Loose?
The Natural History and Captive Care of the Eastern Hognose Snake

Ornate box turtles (Terrapene ornata ornate) are not difficult to breed in captivity, but they do have some special requirements. Your first consideration will be with the fertility of your female. Her fertility will be dependent on being in optimal health combined with hormones being released at the right time. Optimal health is easily achieved by maintaining your turtles in a low-stress environment that is kept as clean as possible and providing them with the proper nutrition. A diet that is rich in both calcium and protein will be vital to your success. Ornate box turtle’s are omnivorous and will require a varied diet, with a slightly stronger emphasis on the protein offered A ratio of 60 percent protein and 40 percent plant matter works best. As always, adding a vitamin and mineral supplement is advised, just be sure to maintain a calcium-to-phosphorous ratio between 3:1 and 5:1. Calcium supplementation should be offered at every feeding regardless of gender, but is vitally important to females to prevent egg binding. It is far more likely to under supplement than to overdo it with box turtles. 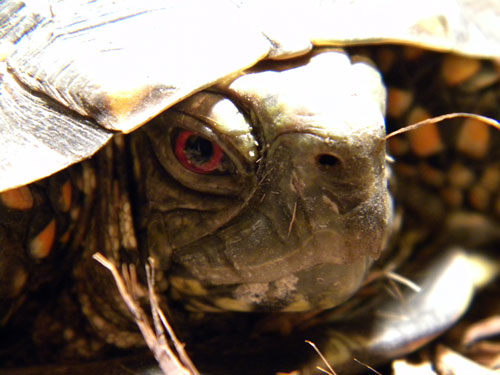 Adult ornate box turtles should be between 5 to 6 inches in carapace length before you begin to breed them.

The obvious health requirements aside, to breed these turtles, adults should be between 5 to 6 inches in carapace length; this is generally reached between 7 and 10 years of age. As is common in turtles, box turtles are slow to mature, and this process cannot be accelerated without risking the turtle’s health.

If you maintain your turtle in an outdoor pen, then the “outdoor” approach is pretty straightforward. Mother nature and the changing seasons will do all that is necessary to signal your box turtles to burrow deep for the winter. However, you may not wish to simply let your box turtles bury themselves in your yard to overwinter. In this case, a large cardboard box or wooden crate filled a foot deep or more with a sand-and-soil mix and an equal amount of leaf litter on top will serve perfectly.

Once the weather in your area begins to cool, with night time temperatures hitting the 50-degree mark, it is time to move your box turtle to its artificial hibernacula. Then place the hibernacula in your garage or shed, and check on the turtle periodically to ensure that it isn’t dehydrating while hibernating. Once the temperatures have warmed, with nighttime temps breaking the 50-degree mark and daytime temps around 70 to 75 degrees, you can bring out your box turtle. Be sure to soak your turtle regularly for the first couple of weeks after it has emerged from hibernation.

If housing your box turtles indoors or keeping large numbers of box turtles with space at a premium, the “refrigeration” method is usually the method of choice. This method is slightly more complicated, as it requires a refrigerator kept on a thermostat to maintain a temperature around 55 degrees. Additionally, it requires that you simulate a cooling down period about four to six weeks prior to placing the box turtle into its hibernacula. In this case, the hibernacula can be as simple as a lightly ventilated plastic storage box with a layer of sandy soil on the bottom, and filled with slightly damp sphagnum moss or leaf litter. Ventilation holes should be cut into each side of the tub about an inch from the top. It isn’t necessary to have a large number of ventilation holes, you can space them evenly at about an inch apart. When the time comes, you simply bury the turtle at least 6 inches deep in the moss or leaf litter. Ideally, you want the turtle positioned in the exact center of the hibernacula, so that it is insulated on all sides by moss and leaf litter. The turtle should not be tightly packed, but take care not to leave free space in the plastic tub. The tub should be secured with rubber bands or tape, and then place the hibernacula in your fridge. The ideal temperature range is between 50 and 60 degrees Fahrenheit.

Check on your turtle weekly to insure it does not become dehydrated. Should dehydration become apparent, most notably by weight loss, soak the turtle in room-temperature water before returning it to the hibernacula. If your turtle becomes obviously ill (i.e. swollen ears, pussy eyes, mucous discharge from the nostrils), then it is paramount that it be brought out of hibernation for veterinary treatment.

For healthy turtles, I recommend that you follow the length of your local fall/winter seasons when it comes to hibernation duration. This will also allow you to take advantage of the seasonal weather changes to help induce turtle mating behavior. Generally, most keepers hibernate only their adults, giving the hatchlings and younger turtles (2 to 3 inches long) a few years to grow in size before attempting hibernation. Regardless, your turtle should be in optimal health, with a good weight, and properly hydrated prior to attempting hibernation. You will want to hibernate your turtles for at least two months prior to warming them back up. This ensures that your females will be in the proper hormone cycle come spring.

Upon arrival of the spring, it usually only takes the change in seasonal weather patterns to induce mating behavior in your box turtles. Make sure that you house turtles of similar sizes together when mating takes place, so as to avoid undue stress on smaller turtles, especially because males can be aggressive about mating with any turtle of any age or size. Nesting will take place in June or July, and at this time, your female will need an appropriate nesting site, potentially multiple sites because box turtles are picky when it comes to nesting. Providing rocks and large tree branches as cover to shield the site from the eyes of would-be predators will encourage your female turtle to select it. The key here is to make your female feel as secure as possible.

Whether you keep turtles indoors or outdoors, your nesting site(s) should be 8 to 12 inches deep and filled with a moist, not wet, mix of sand and soft top soil. Alternatively, I have also used large plastic garbage cans filled with moistened top soil, where I have placed gravid turtles to lay their eggs.

The female will likely lay two to four eggs in the nest she has dug, as long as they are fertile. Infertile eggs are typically laid haphazardly on the surface or in food dishes or water bowls. Often times, the female will cover the eggs in the nest in such a way that it doesn’t even appear that a nest was dug in the first place. So, it is advisable to excavate eggs with extreme care. I have successfully incubated eggs at 80 degrees using moistened sphagnum moss or perlite as a medium. I scarcely cover the eggs in barely damp sphagnum moss. They hatched at an average of 70 days. Incubation can take anywhere from 60 to 90 days depending on the incubation temperature, but typically it takes between 65 to 75 when temperatures range between 80 and 84 degrees. Like other box turtles, the sex of ornate box turtles can be determined by incubation temperature. At 80 degrees, a clutch will exhibit a fairly even mix of males and females. Eggs incubated at 72 degrees will produce mostly to all male turtles. An incubation temperature of 88 degrees will produce nearly all females.

Hatchling turtles should be allowed to remain in the egg to absorb the yolk for up to 24 hours, and I would strongly advise against manually pipping eggs.

Keep hatchlings individually, as neonates are not shy of attempting to feed on each other. In fact, as a general rule, these ornate box turtles are slightly more aggressive than other box turtle species. Provide them with a shallow water dish where the baby turtle can climb in and soak, but in which the depth is never greater than half the distance between the bottom of the turtle’s shell and the nostrils. For a baby turtle this will literally be only a few millimeters deep. To prevent dehydration, substrate should be kept slightly moister than that of your adult enclosures. As far as feeding your baby turtle, the diet should be slightly heavier in protein than your adults, about 70 to 75 percent protein, with ample calcium and vitamin supplementation provided at every feeding. Generally, I free feed hatchlings, offering small portions of food, to keep from wasting food, and replacing it immediately when it dries out.

Hatchlings can be housed individually in simple plastic shoe boxes. Provide them with UVB lighting above the enclosure and heat tape or heat mats under the shoe boxes. You can set temperatures via a thermostatic control. An ambient temperature of 80 degrees will be sufficient to keep your hatchling turtles warm, and the UVB light will provide enough extra heat if positioned at one end of the shoe boxes, as opposed to a central placement, to create a hotspot between 85 and 90 degrees. The cool side of the enclosure should be about 72 to 76 degrees. It is quite possible that the light alone, depending on its proximity to the top of the tub, will provide all the warmth your baby turtle will need, so the temperature should be closely monitored to avoid over-heating.

Want to read the full story? Pick up the February 2011 issue of REPTILES, or subscribe to get 12 months of articles just like this.