On The Satellite Track Of Loggerhead Turtles

A team from the University of Exeter in the southwest of England has monitored the movements of an entire sub-population of sea turtles for the first time. This study confirms that through satellite tracking, it is possible to closely observe the day-to-day lives of sea turtles, accurately predicting their migrations and thereby directly helping conservation efforts. 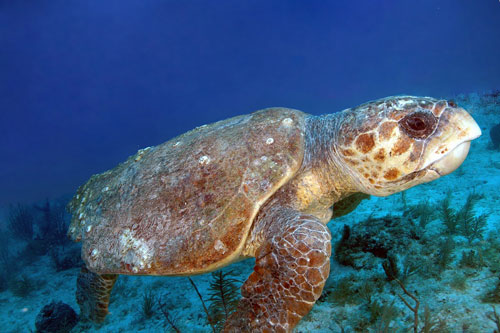 Through satellite tracking, it is possible to closely observe the day-to-day lives of sea turtles, accurately predicting their migrations and thereby directly helping conservation efforts.

Lead author for the study and University of Exeter Ph.D student Dr. Lucy Hawkes (now at Bangor University in north Wales) describes the migrations of a population  of loggerhead turtles (Caretta caretta) in the U.S. Atlantic Ocean over the course of a decade, from 1998 to 2008. The findings reveal that, despite traveling thousands of miles every year, these sea turtles rarely leave the waters of the United States or the continental shelf, generally staying in parts of the ocean which are less than 650 feet deep. This discovery could significantly assist direct conservation efforts in the United States, by providing critical key insights relating to the sea turtles’ movements at sea.

Monitoring focused on adult females that nest along the coast from North Carolina to Georgia each summer and showed that they forage in shallow warm waters off most of the United States eastern seaboard. The study also revealed that the sea turtles, which travel as far north to forage as New Jersey have to head south to avoid the cold winter there.

Dr. Lucy Hawkes said: “This is the first time, to our knowledge, that anyone has been able to say precisely where and when you would find an entire sub-population of marine turtles. This is incredibly useful for conservation as it tells us exactly where to put our efforts. We knew that satellite tracking was a valuable tool, but this study highlights just how powerful it is – without it, we would still be guessing where these beautiful but vulnerable creatures spend their time.”

Her colleague, Dr. Brendan Godley, who led the University of Exeter team, has been using satellite tracking to monitor sea turtles since 1997. He said: “By attaching small satellite tracking devices to turtles’ shells, we can accurately monitor their whereabouts over a long period of time.

“Working with biologists and conservation groups around the world, we are now starting to build a much clearer picture of the lives of marine turtles, including their migrations, breeding and feeding habits. These findings form a valuable resource for conservation groups, who are concerned with protecting turtles from threats posed by fishing, pollution and climate change.”