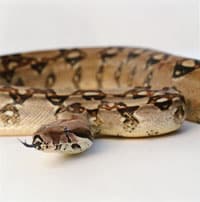 In The Beginning, There Were Toads…
Did You Know That Blind Snakes Decapitate Their Prey?
New LAIR At Los Angeles Zoo Features Herps And Invertebrates From Around The World

COLUMBUS, Ohio, April 19, 2012  /PRNewswire-USNewswire/ — In what can only be described as overwhelming opposition to a proposed exotic animal ban in Ohio last Tuesday, the Senate Agriculture, Environment & Natural Resources Committee entertained testimony for 6 hours from a gallery where opponents outnumbered proponents by more than 15-1. As expected the Committee made some minor concessions passing a Committee Substitute Bill removing harmless Boa constrictors and Savannah cats from the bill, as well as relaxing insurance requirements for other constricting snakes. At the end of a long day one thing was clear: no one can make a compelling case that reptiles pose any public safety risk in Ohio.

The hearing began with proponent testimony from Tim Harrison, a former police officer, self proclaimed animal expert, and professional animal rights activist. Much of his testimony revolved around his recent book on the subject of exotic animals, as well as an anti-exotic animal film he was featured in. Mr. Harrison was the only Ohioan that gave testimony as a proponent. The other three proponents were activists imported from California and other states to give testimony. Collectively they called for expanding the bill to encompass more animals and add greater restrictions. There were complaints that USDA licensed facilities do not have the expertise nor experience to handle some animals, although the same proponent that made those allegations disclosed that she had never owned a dog nor any other animal and had no experience before taking charge of a big cat sanctuary several years ago.

About 28 witnesses testified in opposition to SB310. The standing room only crowd was awash in a sea of 150+ NO SB310 pins handed out to supporters of the United States Association of Reptile Keepers (USARK). Students, soccer moms, school teachers, USDA licensee's and a professional Herpetologist all detailed the many problems and inequities of SB310. The most compelling opponent testimony came from Erika Walsh representing USARK. Ms. Walsh underscored the fact that no one from ODA, ODNR or the Committee has been able to make the case that reptiles pose any measurable public safety risk in Ohio, and therefore do not warrant inclusion in a dangerous animal bill. Ms. Walsh further illustrated the realities facing the reptile piece of this bill; 222… only 2 deaths, and 2 injuries in the last 22 years that can be attributed to reptiles in captivity. This pales in comparison to the scores of deaths and injuries attributed to ATV's, horses and dogs; which are widely regarded as acceptable risks.

As of yet the Committee seems unwilling to acknowledge that SB310 is not serving the cause of public safety in Ohio. The bill has been politicized and is mired in over-complication and unreasonable provisions. The fact remains that 90% of the impact, and 90% of the opposition to SB310 is directed at the reptile industry. They supply animals and husbandry supplies to zoos, museums, research facilities, TV & Film, veterinarians, hobbyists and pet owners. Further, the inclusion of tens of thousands of reptiles in this bill would guarantee that this bill would be an unfunded mandate for a state already $3 billion in debt. Andrew Wyatt, CEO of USARK, noted, "There is no way that ODA and ODNR will have the money and resources to enforce SB310 should it become law. They lack the manpower and expertise to perform even rudimentary inspections." If passed with reptiles included, it is very possible that it will drive the trade of venomous reptiles underground. Wyatt continued, "I really don't think that this is what Governor Kasich envisioned. It does not serve the cause of public safety in Ohio."

The United States Association of Reptile Keepers opposes SB310 and calls on Ohio Senate leadership to remove all reptiles from the bill. Herpetoculture, the non-traditional agricultural pursuit of producing high quality captive bred reptiles is responsible for $30 million in annual revenues in Ohio. Another hearing is currently scheduled before the Senate Agriculture, Environment & Natural Resources Committee for Tuesday, April 24, 2012. It is likely that SB310 could be further amended and voted on.