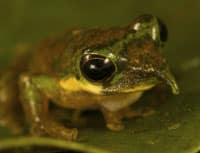 Several new species of mammals, insects, a reptile, an amphibian, and a bird, were found by a collaborative team of international and Indonesian scientists participating in Conservation International’s Rapid Assessment Program (RAP), which explored Indonesia’s remote Foja Mountains on the island of New Guinea.

The frog (Litoria sp. nov.), which was observed to have a long, Pinocchio-like protuberance on its nose that points upwards when the male is calling but deflates and points downwards when he is less active, represents a particularly distinctive find that scientists are interested in documenting and studying further. Its discovery was an accident, after herpetologist Paul Oliver spotted it sitting on a bag of rice in the campsite.

This expedition was conducted with financial and scientific support from the National Geographic Society, Smithsonian Institution, and Indonesian Institute of Sciences (LIPI) and marked a return visit to a mountainous region recognized by scientists as a profound species generator because of its relative isolation, elevation, and tropical environment.

The Foja Mountains, located in the Indonesian province of Papua on the island of New Guinea, encompass an area of more than 300,000 square hectares of unroaded, undeveloped, and undisturbed rainforest. The health and biodiversity of this wilderness provide a critical carbon sink for the planet.