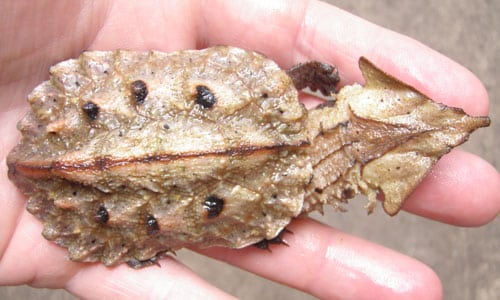 The mata mata turtle is one of the neatest-looking turtles on the planet. It looks like debris found at the bottom of a vernal pool, such as leaves. In the wild someone might walk right past a large specimen. The carapace contains brown, red and black coloration. The species has a wide head and a pointy nose. Its neck has a rigid texture to help with the camouflage. Hatchling mata matas are more brightly colored and appear whitish or yellowish like a tropical leaf.

Mata mata turtles are quite available as of 2009. Although they are imported regularly, that might change in the near future. There is more supply than demand simply because the turtles grow so large and are not for beginners. Creating the proper enclosure for these turtles is one issue that keeps demand down.

Mata mata turtles can measure more than 2 feet long. However, the typical size ranges from 16 to 20 inches long for full-sized adults.

Exact details for the mata mata turtle life span is not really known, but most documentation shows the turtle’s average life is anywhere from 40 to 75 years. Some turtles can live more than 100 years if given the right care.

Mata mata turtle like slightly acidic water with a pH near 5 or 6. Increase acidity by adding sphagnum moss, which is very acidic. Shallow water is a good idea. A water depth of 8 to 10 inches for an adult, or 3 to 4 inches for a hatchling, is sufficient. Although these turtles spend much of their time in the water, they don’t swim around much. They lie still on the bottom most of the time.

Larger mata mata turtles, 16 inches and longer, require larger tubs or setups at least 4 feet by 4 feet. Smaller turtles can do well in smaller enclosures. The enclosure should allow for adequate room for the mata mata to move around. Make sure you have good filtration with these turtles. Oxygen flow is key because it helps fight unwanted bacteria in the water. Water should be changed regularly and kept as clear as possible.

Aquatic plants or artificial plants can be added for hiding places, which help reduce a mata mata’s stress. A log, branch or rock is a good idea for a basking area. Avoid using big rocks in the enclosure because this can cause cuts and scrapes that can lead to shell rot.

Water temperatures around 80 to 90 degrees Fahrenheit are fine. Mata mata turtles are found in tropical environments, so they require higher temperatures. Position a basking light, such as a 75- to 150-watt heat bulb, about one foot above a basking spot. Add an additional UVB-emitting bulb for ultraviolet light. The basking area should be in the mid- to upper 90s.

Mata mata turtles are carnivores and prefer live fish. Minnows, platies, mollies, guppies, goldfish and sunfish are a fine selection. I have seen some turtles take night crawlers, as well. It is unusual to have them feed on commercial foods. You can keep the enclosure stocked with fish at all times and allow the mata mata to feed freely.

Be sure to put plenty of feeders fish in the mata mata’s enclosure. It can be difficult for your mata mata to try to catch one or two fish when it is hungry. Try to keep it stocked with 30 or 40 fish at a time. It will eat many at first and then a few here and there throughout the next 4 or 5 days depending on the size of your mata mata. A full size mata mata around can eat feeder (small) goldfish or larger rosies (minnows).

I would advise against handling imported mata mata turtles until you get this species established and comfortable. This means the turtle is eating, active, and does not show any signs of illness or bad health. Mata mata turtles hatched in captivity can be handled a little more often, but small hatchlings should start eating and show signs of growth before you do much handling.

Al Roach is the source for Mata Mata Turtle information. Please visit his site at www.Reptastic.com.