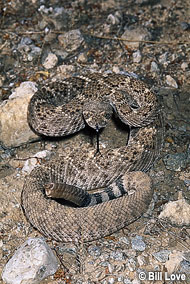 The terrarium should be about 4 feet square for the largest adults and tall enough to allow easy maintenance. Keep the substrate simple and easy to clean. Indoor-outdoor carpeting is suggested. A water bowl should be available at all times, as this species does well at a moderate humidity. The best temperature range is between 80 and 85 degrees Fahrenheit, with an undertank heating pad in one corner of the terrarium. Western diamondbacks eat almost anything, from lizards and frogs to rodents of all types. Small specimens take mice and rats, while the largest adults will take squirrels and small rabbits. Unlike some other rattlesnake species, it normally does not carry high parasite loads, although all specimens should be checked by a competent veterinarian. Wormers and other medications will be taken in the food. Once adapted to the terrarium, this is a hardy and long-lived snake. One of the most undemanding venomous snakes, it also is the most dangerous North American snake, killing more people in the U.S. and Mexico than any other snake. Its large size means its terrarium must be sturdy and include all the usual safety features for venomous snakes. Even small specimens have a dangerous bite and should never be underestimated. A lockable hide box of suitable size must be used.

Likely to be found in almost any type of habitat within its range that is relatively dry. It can be expected in deserts, scrubland and grasslands, but also occurs in pine forests and pastures, sometimes surviving near towns and ranches. Commonly nocturnal, it often is found active during the day as well.

A wide-ranging rattlesnake found from southeastern California to central Arkansas over the Southwest and in much of northern Mexico.