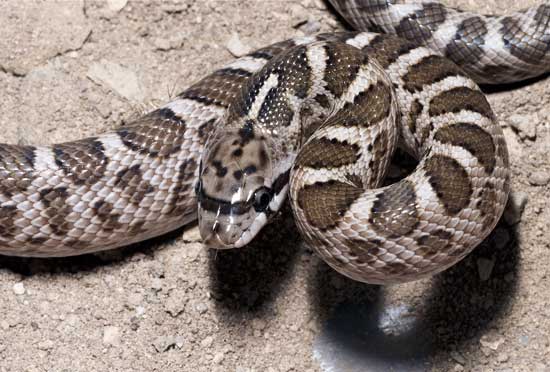 Ken Foose November 9, 2017 8:41 pm
Green Tree Python Information And Care
The Rubber Boa
How To Get Your Hognose Snake to Start Eating Again

A meek, mild snake that is shiny and attractive. It is a manageable size, easy to house and easy to feed. These are one of the best pet snakes you can own.  The glossy snake has the pattern and look of a gopher snake, but all dressed up. As a youngster, I recall them being referred to as a gopher snake in a tuxedo.  An easily maintained species. Glossy snakes thrive in simple, low-maintenance enclosures. An adult can be housed in a tank measuring 30 inches long, 12 inches wide and 12 inches tall, with a secure screen top. Larger enclosures can be used, as well as smaller enclosures for smaller snakes. Bedding can be aspen, bark or cage carpet. Place a heat pad under one end of the tank to establish a hotspot of about 90 degrees Fahrenheit. The rest of the enclosure can be from 75 to 80 degrees. Humidity varies, but for the most part it can range from zero to 50 percent for this desert species. Place a water bowl at the cool end, just large enough for the snake to drink from. Hides are important, as this species spends most of its day hidden under rocks and such in the wild. Multiple hides are recommended. Place one at the cool end and one at the hot end. Lighting is not necessary.  Glossy snakes are powerful constrictors and thrive in captivity on a diet of pre-killed adult mice. They will also eat lizards and small birds, but rodents are the best diet for them.  Glossy snakes have been pretty much ignored in the pet trade. Traditionally, they have been field-collected and switched over to domestic mice for food. Recently, there has been a surge of captive breeding, and more hatchlings raised on pre-killed pinky mice are becoming available. Glossy snakes have variable patterns, depending on locality, but all have about the same blotched pattern with glossy, high-sheen scales, hence the snake’s name. You might find some for sale at reptile shows, both field-collected adults and captive-bred babies. They are rarely found in pet stores, and sometimes offered in specialty reptile stores and on the Internet.  Ken Foose produced his first captive-bred snakes at age 11. With a Master’s Degree in zoology, he has been both a zookeeper and curator. He opened Exotic Pets, which specializes in reptiles and amphibians, in Las Vegas in 1991. He is currently president of the International Herpetological Symposium.