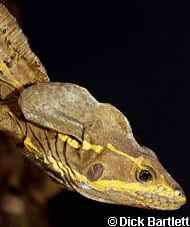 A swift, agile runner, the brown basilisk relies on lightning fast bursts of speed to attack and surprise its prey. Small lizards and invertebrates make up the bulk of its diet. Most food items are seized in jaws and swallowed whole after being subdued by several bites. Give brown basilisks some extra space in captivity so they have room to maneuver in chasing their prey. A heavy branch angled across the cage diagonally so the uppermost end is under a basking lamp will allow the brown basilisk a place to warm up and survey the expanse of their cage. Mist the cage with water several times per week, while also providing a small bowl of fresh water. Brown basilisks are flighty, nervous creatures that don’t like to be handled, but older, acclimated individuals will eventually settle down to the routines of captivity. Still, this is a pet best observed rather than being a hands-on pet. Most brown basilisks available as pets are wild-caught in Florida.

Utilizes a broad range of terrain from brushy fields to jungle, often near water.

Central America, and now introduced to parts of southern Florida.