When your Jackson’s chameleons (Chamaeleo jacksonii xantholophus) come of age, approximately nine months to one year old, place the female into the male’s enclosure for breeding. Allow the male to breed for three to five days. Watch for signs of disinterest, or aggression, such as the female rocking back and forth when approached by the male, hissing or biting. If this occurs, separate the animals for a week and try again. 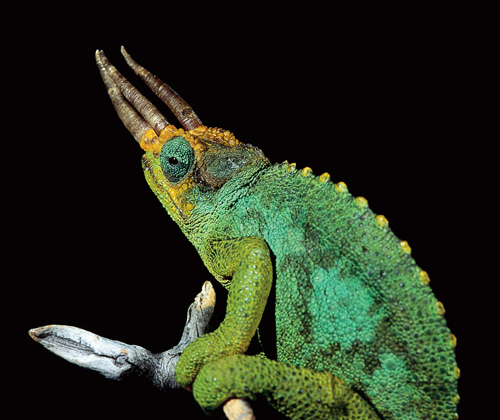 All Jackson’s chameleons are ovoviviparous, a live-bearing species that produces approximately 20 to 30 offspring per brood. The Mount Meru Jackson’s usually produce less than 20 per brood. The neonates are actually incubated in a soft-shell membrane inside the mother as opposed to being deposited in the ground in a harder shell.

Gestation is typically between seven and nine months for the first brood. After which time, if proper breeding has occurred, another brood will be born every three months thereafter. I always reintroduce males to make sure the sperm count is enough to fertilize the new brood she is incubating. Upon necropsy of expired females, three different generations have been found growing simultaneously inside a female. The females will produce only yolks if the sperm count is not high enough to fertilize all the developing eggs. For this reason, reintroduction to the male two weeks after giving birth is recommended if the female is in good health.

Neonates often start eating very soon after birth. Feeding may occur in hours or days from birth. Lightly misting with lukewarm water will keep the neonates from becoming dehydrated and stimulate their eating. Be observant during gestation and have your plan for feeding prearranged. Live births can be hard to time. Being observant of the female as she grows larger and starts to look like a marble bag, or slows down on the eating, may be indications that she is ready to give birth.

One of the most common mistakes is feeding only one type of insect to your reptiles. In my opinion, any herper keeping insectivores needs to be an amateur entomologist to keep healthy long-term animals. Here are just a few suggestions that have worked well for me at Sticky Tongue Farms. Please be advised that these versions of insect rearing are a brief description that has worked well for a small number of insects. Further information on large colonies of a given insect may be available from the supplier.

Place 2 to 3 inches of oat bran/wheat germ mix in the bottom of the enclosure. Gut load the insects with fresh fruit, vegetables and the bran mixture. To pupate worms into beetles, put them into deli cups with the bran mix, and place them in a dark cupboard. They will pupate into beetles in two to three weeks. House the beetles in an aquarium with damp soil. These insects will cannibalize each other if not properly feed. When you see the worms hatching out, remove them to a separate container. When ready to feed to your chameleons, remove adult worms to a container that has no substrate. I use Vit-All in the container to gut load them. Follow directions for use on the can. After properly gut loaded, I dust the worms with Miner-All as directed.

We have had very good luck with Jackson’s chameleons on a fly diet. Acquire the pupae from a biological supply house or try our recipe. Adults are egged using a small cup with waded tissue wetted with water and evaporated milk. Tissues can be rinsed and reused, as a pheromone is released by the female flies when they deposit ova. The thick brown industrial or school type towel is best for repeated use. To acquire wild-caught flies, simply place the wetted tissues with the milk and water mixture in the yard. In a few days, thread like worms will be visible on the damp towel.

In a bag combine 4 quarts of flaky red wheat bran, 2 cups rehydrated alfalfa pellets, 2 pints dry milk and 2 teaspoons active dry yeast. Mix and add 3 quarts of water and knead the mixture in a plastic bag until it resembles bread dough. Pack loosely into a Rubbermaid dishpan and add fly eggs to the surface by rinsing the towel into the dishpan. Cover the pan with cheesecloth or fine screening.

On approximately the fourth day 1 to 1 1/2 quarts of water should be added to mix. The pan is then placed in a large sweater box with a screened lid. Dry bran is poured around the outer margin of the box to dry the emergent larvae and encourage pupation. If the majority of the larvae have not been driven out in a few hours, add an additional half to 1 quart of water. Allow larvae to pupate in this mixture. Pupae are sifted from the bran and stored in deli cups. Adults will emerge in two to four days thereafter, depending upon the temperature. Pupae can be stored in the refrigerator for one to two weeks.

Feed adults a mixture of dried milk and sugar in a container of water with waded paper towels to prevent drowning. Adult flies can be egged one week after emergence and will produce eggs for two to three weeks. Each pan should produce 10,000 to 15,000 flies. The recipe can be tailored for demand. Smaller pans may develop more slowly due to decreased thermal output generated by the larvae. To feed out the flies upon hatching, I place flies in a small receptacle containing Vit-All for gut loading. The newly hatched flies will not be capable of flight right away. After properly gut loaded, I add Miner-All to the container and shake it until the insects are evenly coated. The Miner-All will weigh down the newly hatched flies and make it easier to place them into the cage for feeding.

This food item is easily purchased from a supplier or started on your own in warm weather for newborn chameleons. Place a bowl of fruit in the enclosure, sprinkle with yeast and keeping the culture damp. Add fresh fruit weekly for months of production.

Want to read the full story? Pick up the March 2010 issue of REPTILES, or subscribe to get 12 months of articles just like this.