Western Garter Snakes: Looking for Thamnophis with other herps sprinkled in.

A wind was blowing in fitful gusts from the northwest. It buffeted the Trooper and then eased us along in its calm. From the look of things we made it to our target area just in time. Although temperatures had yet to drop, it seemed a frontal system was about to engulf us in climatic uncertainty.

Gary Nafis and I were north of Mexican Hat, Utah. The nearby escarpments glowed brilliant terra-cotta in the setting sun. Now everything was shrouded in darkness. It looked as if we beat the arrival of the front by just a few hours. 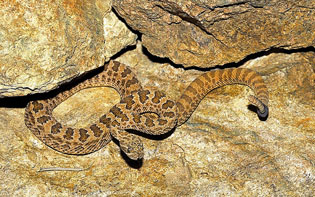 Richly colored by night and lighter by day, metachrosis is marked in the small rattlesnakes of southeastern Utah. This rattler is displaying the diurnal coloration.

Despite having seen John Slone’s research study on Hopi rattlers and midget faded rattlesnakes (Crotalus viridis nuntius and C. v. concolor, respectively), Gary and I still hoped to see and photograph both of these small races of prairie rattlesnake, as well as a Mesa Verde night snake (Hypsiglena torquata loreala), in the wild. It had been suggested that we concentrate our efforts in the Mexican Hat area, just north of the Arizona-Utah border.

The viridis-complex rattlesnake in the area is small, often very brightly colored, and was long thought to be the Hopi rattler.

The long drive to Mexican Hat, during which no herps were seen, lulled us into complacency. But we quickly came back to reality when, on a deserted road, a slender ribbon of brick red was spotted in the headlights. I stood on the brakes and stopped several feet ahead of where I had intended, with the result being that the Trooper rolled over the snake. We piled out and straddled the snake, which was unscathed.

Everything about it screamed Hopi, Hopi, Hopi! The coloration, blotch shape and small size fit every old description I’d ever seen for the Hopi rattler. But we had been told that current genetic analysis show the rattlesnakes from Mexican Hat to be midget faded rattlers, and that the range of the Hopi rattlesnake has been reduced to a tiny region of northeastern Arizona.

Be that as it may, the rattler before me that night was as classic a Hopi as I have ever seen. On the pavement the snake was an intense brick red, a color that would certainly blend well with the brick-red sandstone formations it lived among. However, we knew that metachrosis was pronounced in this taxon, and that by day its color would be much lighter. 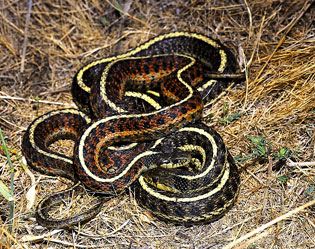 These two phases of the coast garter snake (T. elegans terrestris) demonstrate the great variability common to this species.

As the night wore on the wind became stronger, and the next morning dawned clear, cool and very breezy. At that point we should have begun our drive to California, but we hung in for another night, seeing only sagebrush lizards (Sceloporus graciosus) for our delay.

The Golden State has quite an array of thamnophines — somewhere in the vicinity of a dozen species and subspecies. My interest in these varied from the giant garter snake (Thamnophis gigas) at the top of my list to the checkered garter (T. marcianus) near the bottom.

The populations of the giant garter snake have been reduced by habitat degradation in many areas where the snake was once common. However, fair populations of this very secretive, predominantly aquatic snake remain in some of its more remote habitats.

We started our search for the giant garter snake at its home canals, but found one after another of these habitats already dry. So, we elected to ask researcher Dr. Glen Wylie whether he would allow us to photograph a captive example. Dr. Wylie agreed, and we were provided with a workable compromise.

The giant garter snake (which can actually exceed 5 feet in length) may be dark with prominent light stripes, or have a lighter ground color adorned by three rows of dark spots dorsally and poorly defined stripes. Of the stripes, the vertebral is the most prominent and the lateral are on scale rows two and three. Colors and patterns seem to be geographically variable.

Other garter snakes, such as the strikingly colored, endangered San Francisco garter (T. sirtalis tetrataenia) that are supposedly as difficult to find as the giant garter, were actually found by accident as we searched through pondside grasses for the more common coast garter snakes (T. elegans terrestris). 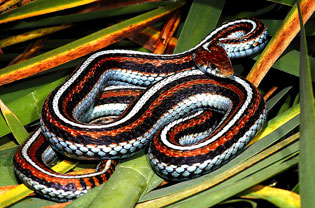 San Francisco garter snakes (Thamnophis sirtalis tetrataenia) were fairly common in areas where the author searched for other species.

The San Francisco garter snake, typified by its bright yellow vertebral and bright red-orange dorsolateral stripes, is one of the most beautiful of American snakes, but it is (in my estimation) outshown in coloration by some populations of the California red-sided garter snake (T. sirtalis infernalis). Admittedly, the pattern of the red-sided garter snake is more broken, but the contrast is crisper.

Gary shepherded me to a series of several small ponds that were overgrown with cattails and other reeds. We got to these rather late in the afternoon, and although we startled several San Francisco garter snakes and found a pretty San Francisco alligator lizard (Elgaria c. coerulea), nary a coast garter snake was to be seen. As darkness fell we still had not found any coast garter snakes, so we decided to remain in the area overnight and try our luck the next morning. This proved a prudent decision. 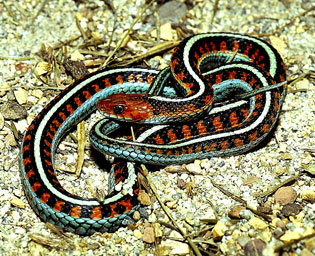 The next morning, after the sun’s rays penetrated the fogbank and were warming the bases of the cattails, we saw our first coast garter. It was big, lacking even vestiges of red, and covered with scars that told of trauma survived. Soon after a second one was seen; it was small and dark but unscarred.

Next, a San Francisco garter snake darted into the reeds. Then a third coast garter was seen. This one was nearly 3 feet long, had a foreshortened tail and a bit of red on the sides. Soon a small San Francisco garter snake was seen foraging in the shallows for minnows, and right behind it was another adult coast garter. This one had quite a lot of red laterally, was heavy bodied and lacked scars.

The next two garter snake species I hoped to see were the Sierra (T. couchii) and the Oregon (T. atratus hydrophila). Neither was colorful, but what the heck, it was now a case of garter snakes or bust. 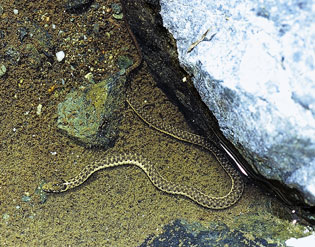 This juvenile Sierra garter snake (T. couchii) is foraging in the shallows for small minnows.

The next thing I knew we were back in the Sierras, following a river that twisted, turned and varied from stretches that were smooth and serene to rapids dashing over rocks that had to be seen to be believed.

Finally, Gary said something to the effect of, “Go around the next bend and park.” I happily did so and from this vantage point looked down at the river 40 feet below. The banks from the shoulder of the road to the river’s edge were a tumble of immense boulders. Gary ran down while I picked my way — gingerly — to the edge of the river.

Within minutes we each found a small Sierra garter snake foraging for minnows in the shallows. The Sierra garter snake is one of the darker and less photogenic of the genus, and it is one that is persistently aquatic. But it was another species for which I needed photos, so dark or light, big or small, it was a welcome find.

Back on the road, we continued north toward the redwood-and-spruce forest of the Del Norte region of northwestern California, home to a few salamander species that I hoped to photograph. Along the way we stopped alongside another river, where Gary found Oregon garter snakes on an earlier trip. Within minutes we found a nice adult garter snake foraging among the partially submerged boulders, as well as some foothill yellow-legged frogs (Rana boylii) in shallow riverside pools.

Finding the majority of garter snakes I was hoping for, as well as a bonus of several Shasta alligator lizards (E. coerulea shastensis), we made a beeline for the redwoods just south of the California-Oregon state line. Hopefully, the shaded glens provided by these wonderful trees had remained cool and damp enough to allow plethodontid salamanders to still be surface active.

And again we were lucky. Along the way we stopped at the edge of a bubbling mountain stream and succeeded in finding both adult and juvenile black salamanders (Aneides flavipunctatus). Despite being considered a climbing salamander, this pretty, slender salamander is most often found beneath rocks in damp areas.

A bit further north we succeeded in finding several wandering salamanders (Aneides vagrans) beneath the loosened bark of fallen trees. These brown salamanders with irregular light, lichenate markings are somewhat more arboreal than the black salamanders.

Beneath bark and fallen limbs on the forest floor, Del Norte salamanders (Plethodon e. elongatus) of all sizes, both the striped and non-striped phases, were found.

But, for me, finding the painted ensatina (Ensatina eschscholtzii picta) was a trip highlight. It was the last of the races of this alert-appearing salamander that I needed to photograph. Although none that we found for photographs were outstandingly bright in either color or pattern, finding these salamanders brought a feeling of success and finality to the trip.