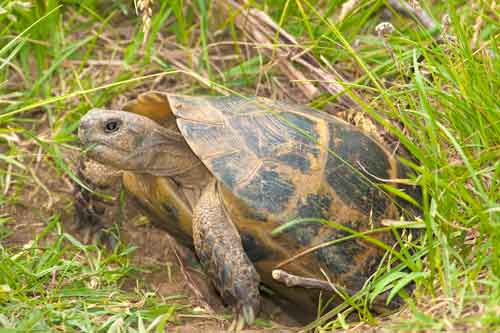 Care sheet for the Greek tortoise.

Found in North Africa, southwest Asia and southern Europe, the Greek tortoise inhabits a variety of habitats, including some that are particularly arid: rocky hillsides, Mediterranean scrub, forests, fields and meadows are all occupied by the Greek tortoise subspecies. A highly domed carapace joins the singly hinged plastron by a thick bridge. The coloration ranges from yellow-gold to dark brown or black. Flecks, borders, rays and spots on the shell produce a pattern reminiscent of a Greek mosaic, hence the common name. One to three raised scales, spurs or tubercles are located on either side of the tail, on each thigh (these spurs are the reason for the alternate name, the Mediterranean spur-thigh tortoise). The head is blunt with large eyes and the front legs exhibit large scales and thick, powerful claws. The supracaudal shield just above the tail is undivided.
Several subspecies of the Greek tortoise are recognized, which has enabled a high amount of confusion in regard to proper identification of captive specimens. Familiar forms of the Greek tortoise are:

Over the last few decades, many Greek tortoises, particularly Ibera and goldens, were imported into the United States for the pet trade. Many of these animals harbored parasites and diseases and, sadly, many did not survive. Those that received medical attention and appropriate care, however, are now thriving in captivity. This founder stock has produced a high number of captive-bred babies, some now grown up and producing offspring of their own, and these USA-born tortoises have proven to be an excellent choice for the reptile keeper. A rather responsive species, the Greek tortoise has gotten rave reviews from those who have attempted to keep it long term, the right way.

Depending on the subspecies, Greek tortoises are readily available. Forms such as the Ibera Greek and now the golden Greek have produced well under captive conditions and healthy hatchlings can be found at reptile expos, pet stores, online dealers and private breeders. Throughout the year, one can usually locate babies available for sale with ease.
Keepers are strongly advised to refrain from buying freshly imported Testudo graeca from the wild; these specimens are brought over in droves and are typically offered for sale in spring and late summer. Only the very experienced tortoise keeper should attempt to take on such a challenge. As always, buy captive bred over wild caught.

Depending on the subspecies, Greek tortoises will grow to between 5 and 8 inches. Some examples of T. g. ibera may attain 10 or 11 inches, but this is rare. Male Greek tortoises are usually smaller than females, but again, there are exceptions.
At hatching, most Greek tortoises are no more than an inch in length. They can grow rapidly when overfed and reports of them reaching 4 inches in less than two years is common, but not recommended.

Testudo graeca subspecies are known to be some of the longest lived of the tortoises. Reports suggest well into the 100s. In the wild, many do not live past the age of 20 due to predation and other factors. When kept safe and under optimum conditions, Greek tortoises thrive and can live to a ripe old age. Some have outlived their keepers.

Housing Greek tortoises outdoors in a naturalistic pen is always best. During the warmer part of the year, they can be kept in spacious enclosures that are well planted with edible vegetation and receive plenty of time in natural, full sun.
Indoors, the construction of a “tortoise table” will suit the needs of Greek tortoises well. A 3-by-6-foot unit made of ply wood will suffice for a single adult and up to a pair of adults. Wood is always recommended over plastic or glass so that the tortoises cannot see through their enclosure’s walls. This way they will learn their boundaries and it will lessen their attempts to escape. 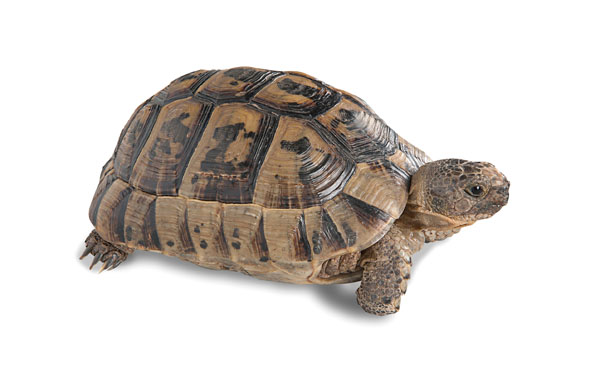 Although they don’t get as large as other tortoises, Greek tortoises still need ample space, especially if they’re being kept indoors.

If you have the space, always make the tortoise pen as large as you can. This allows for a more natural behavior cycle and reduces stress, especially from territorial or aggressive specimens. Housing males together may pose a problem with them fighting relentlessly, especially when females are present. It’s important to give the tortoises as much space as possible because they could be spending months on end indoors, until the weather outside is once again appropriate for keeping the tortoises outdoors.

As always, natural sunlight should be utilized whenever possible and the tortoises fully benefit in many ways from being exposed to it. When housing them inside, proper lighting is essential for keeping them healthy. Many options are available, such as daylight spot bulbs, infrared heat bulbs and fluorescent tube lighting.
Mercury vapor bulbs, which provide both UVA and UVB, are a personal favorite of mine. A 100- to 150-watt mercury vapor bulb installed above one end of the indoor tortoise enclosure creates a perfect basking area. It also lights up the enclosure nicely.
The opposite end should remain cool.
You can also use a regular incandescent spot light for the basking area, so long as it reaches a temperature of 95 to 100 degrees Fahrenheit. In this case, a fluorescent UVB-emitting bulb will need to be installed as well. The ambient room temperature where your indoor tortoise enclosure is located should remain between 75 and 85 degrees.
When raising hatchlings, a humidity level of between 65 and 70 percent is appropriate. This can be achieved by spraying down the enclosure every other day with warm water. A water dish in combination with a substrate that retains humidity (see following substrate section) will do the trick, as well. By keeping baby Greek tortoises well hydrated and at a sufficient humidity level, they will grow smoothly and retain a good weight.

The three best substrates for housing Greek tortoises indoors are cypress mulch, aspen shavings, or a 50/50 mix of top soil and play sand. When using aspen it is very important to make sure the tortoises stay hydrated because it tends to be very dry. Rabbit pellets are OK, but they do not retain humidity well and mold will grow quickly in soiled areas. Cedar and pine beddings absolutely must be avoided, as they are toxic to tortoises. 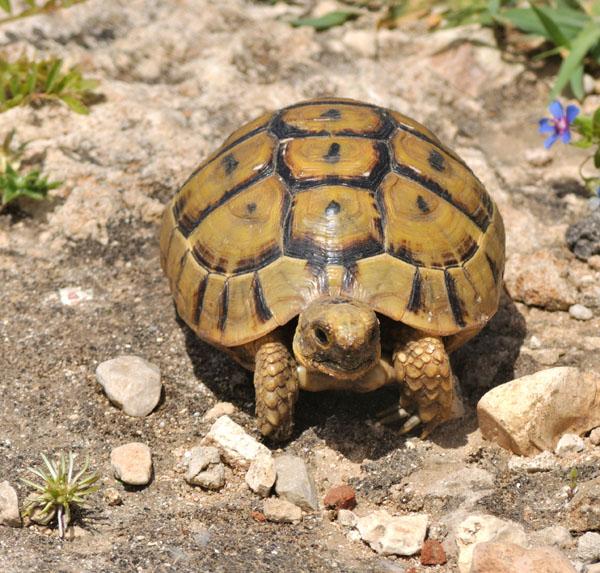 Hatchling Greek tortoises that are kept well-hydrated and maintained at the proper humidity levels should grow into healthy adults.

Greek tortoises spend much of their time gazing on edible landscape. For this reason, it is an excellent and healthy idea to offer weeds such as dandelion, clover, plantain, hawksbit, cat’s ear, wild strawberry and thistle. When these items are not available (often during the winter months), they can be replaced by dried, bagged organic herbs. These can be found online.
Store-bought greens such as collard, mustard, kale and turnip can be offered sparingly. Commercial diets such as Mazuri Tortoise Diet are excellent for helping Greek tortoises to maintain good weight, but again, should be offered only in moderation. Calcium supplements in the form of cuttlebone are wonderful additions to their diet; the tortoises will gladly nibble on them.

Many Greek tortoises originate from extremely arid habitats while others are found in more temperate locations. Regardless of their origin, all Greek tortoises need to stay hydrated. A shallow water dish should be available at all times for drinking and soaking, and it should be cleaned/changed frequently. Tortoises defecate in their water, so keeping the supply clean is a must. Greek tortoises also appreciate an occasional misting of their environment, which prompts them to empty their bowels and drink.

Similar to most turtles and tortoises, Greek tortoises do not like to be held. They should be picked up only when absolutely necessary, such as prior to being soaked, cleaning of the enclosure and health checks. While they tend to become very responsive to their keepers and will approach for food, they should not be over-handled by any means.
Greek tortoises are easy-going, friendly and interactive, but like all reptiles, they should never be overly stressed.

Male Greek tortoises will exhibit the classic behavior of “shell ramming,” in that they use their carapaces to slam into the females in order to coax them into breeding. Once the female submits to the male’s advances (he will also viciously bite at her legs and face) he will mount her from behind and begin copulation. A series of high-pitched squeaks will emanate from the male’s mouth as he sticks out his tongue during copulation. 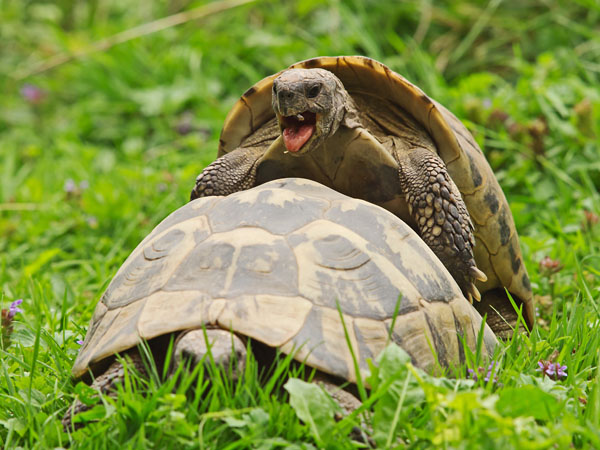 While mating, male Greek tortoises will stick their tongues out and make high-pitched squeaking sounds.

This act of courtship generally takes place in April and May, with egg-laying commencing in June. The female digs a 4- to 7-inch long, flask-shaped nesting chamber with her hind legs before depositing three to six eggs (sometimes more, depending on the subspecies). She then covers the nest and leaves the eggs to hatch on their own.
I prefer to dig up the eggs to incubate them artificially. They are placed in closed deli cup containers on slightly moistened vermiculite and incubated at 84 to 88 degrees. Higher temperatures will result in females; the lower, males.

After 55 to 70 days, the baby tortoises will hatch. I leave them inside the egg containers inside the incubator until their yolk sacs have been absorbed. Then they are placed in rearing enclosures for the first few years of life, before being moved to the larger enclosures where the adults are kept.

As studbook coordinator for the North American Regional Studbook for the Western Hermann’s tortoise (Testudo hermanni hermanni), Chris Leone is no stranger to Mediterranean tortoises and their care. He has kept and worked with numerous species such as Greek, Egyptian, marginated and Hermann’s tortoises. Visit his websites at www.gardenstatetortoise.com and www.hermannihaven.com.