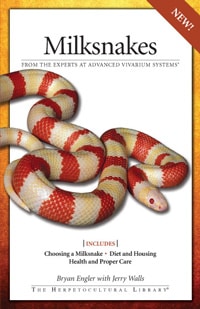 The Herpetocultural Library books are favorites of reptile hobbyists.

Once upon a time a herpetoculturalist named Philippe de Vosjoli entered the publishing realm. His magazine, The Vivarium, was the pre-eminent reptile magazine, published by the organization Philippe founded, the American Federation of Herpetoculturalists. Known for presenting the nitty-gritty facts about keeping pet reptiles, as well as providing natural history about them, reptile fans relished every issue of The Vivarium. It really was a landmark achievement in the realm of reptile publishing. In the early 1990s Philippe sold The Vivarium to BowTie Inc., the company that owns REPTILES magazine (among many others) and this website. It was folded into REPTILES, but for all intents and purposes ceased to exist. By then REPTILES was, and still is, the most widely read reptile magazine. 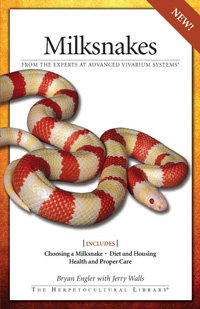 Milksnakes book from The Herpetocultural Library.

Philippe also formed Advanced Vivarium Systems, the publishing brand that produced a series of reptilekeeping books comprising the Herpetocultural Library. These books were another first, and they offered detailed and accurate care information for specific reptile species. Advanced Vivarium Systems, too, eventually came under the ownership of BowTie, and the Herpetocultural Library remains some of the best-selling reptile care books available on the market today.

Many of The Herpetocultural Library books are written or co-written by Philippe, including The Green Iguana Manual, The Lizard Keeper’s Handbook, Popular Tortoises, Horned Frogs, The Art of Keeping Snakes, The Boa Constrictor Manual, Crested Geckos, Essential Care of Chameleons and Popular Amphibians. These are a small sample of the animal-specific books that are available. There are many others, covering many reptiles, from box turtles, monitors and uromastyx to red-eared sliders, day and leopard geckos, and anoles. Other experts have contributed to the Herpetocultural Library in addition to Philippe, including Bill and Kathy Love (Corn Snakes: The Comprehensive Owner’s Guide), Robert Sprackland (Grassland and Savannah Monitors) and Julie Bergman (Geckos). The newest AVS book, which has just been published, is Milksnakes.

In addition to animal-specific AVS titles, there are other topics, such as health (What’s Wrong With My Snake? by John and Roxanne Rossi, and Understanding Reptile Parasites, by Roger Klingenberg) and Vivarium Design. And if you like invertebrates, there’s Tarantulas and Scorpions, too.

If I may be permitted to toot my own horn a little, there is a companion series to Advanced Vivarium Systems, and that is the Beginning Vivarium Systems series of reptile-care books. They are written by yours truly, and there are three titles: Snakes, Lizards and Turtles and Tortoises. I pitched the idea for this series several years ago, when I thought a reptile care series aimed at children might be successful. It seemed like a natural for BowTie, too, because BowTie was already publishing the Advanced Vivarium Systems books. After I pitched the idea I got a crash-course in the book publishing business. I had by then been working in magazines for many years, but I did not have much involvement in the book business, except for selling them. 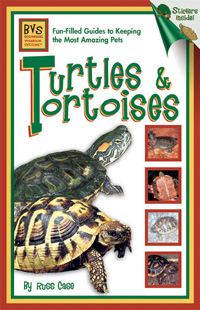 My family at one time owned some retail bookstores in Orange County, Calif. We named our store The Book Case (clever, huh?), and opened our first one in Huntington Beach. Then we opened a second, also in Huntington Beach. That one took off, and we ended up closing the first one and opening a third in Orange. That one, despite high hopes, never took off, and we ended up closing it a few years later. For awhile the sole remaining Huntington Beach store supported my family, but then Crown Books opened. Backed by the Dart Corporation, which also owned Thrifty Drug, Crown bookstores began popping up everywhere. Independent bookstores like ours began dropping like flies. Soon a Crown opened a mere mile away from our store, and that was that. We decided to try to sell the store, and, somewhat miraculously we did. One of our customers thought she could make a go of it, selling not just books but antiques. Sadly, things didn’t work out and it wasn’t long before The Book Case was no more. Of course, Crown Books has since gone out of business, too, and I will admit to feeling a tiny smudge of satisfaction at that.

So much for my family’s adventures in book retailing. Once my idea was accepted, one of the first decisions made was to change the title of the series. I originally pitched it as the Kids Vivarium Systems books, but the editors of BowTie’s book division wisely suggested replacing “Kids” with “Beginning.” Then I had to get down to the nuts and bolts of writing some books. I wrote them over the course of two years. It was fun and, happily, they’ve sold well enough to warrant additional printings. If you enjoy my blathering in this blog, and you’ve got reptile-loving children in your life — SHAMEFUL PLUG — maybe they would like my books.

I’m proud that for the past 16+ years REPTILES magazine has been helping hobbyists, both new and seasoned, better care for their reptile pets. Having good books, of course, especially if they’re particular to the species of reptile you’re keeping, is another integral part to providing the best possible care for your pets. Back when I was younger books such as the AVS books were unheard of. These days, hobbyists have no excuse for not knowing how to care for their animals.

No matter what your skill level, Lumina Media's reptile books, through the Advanced Vivarium Systems and Beginning Vivarium Systems books, offer something for everyone. They provide reliable care information from people who know, many recognized experts in the field of herpetology — and the ones I wrote come with stickers!