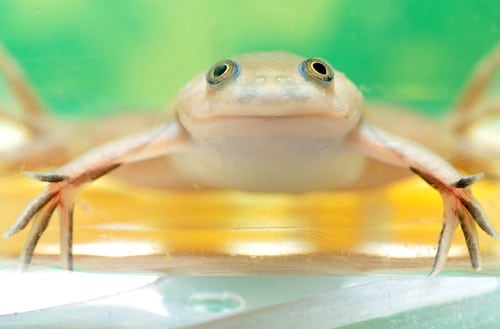 If you are having difficulty breeding your frogs, it may be related to the water in which they were reared as tadpoles. Recent research published in the scientific journal Aquatic Toxicology suggests that frogs are sensitive to progestogens, which are hormones that are increasingly appearing as environmental contaminants, as a byproduct of human medicines.

The metabolites of many medicines that people take are still entering the environment via sewage systems. Progestogens are commonly-used hormonal preparations, included in contraceptives, cancer treatments and hormone replacement therapy prescribed for menopausal discomfort. Different kinds of progestogens have already been identified in waterways in a number of countries.

In this detailed study, it has emerged that female frog tadpoles that swim in water containing a specific progestogen, known as levonorgestrel, are likely to suffer from abnormal development of their ovaries and oviducts, resulting in adult sterility.

Professor Cecilia Berg and student Moa Kvarnryd from the Department of Environmental Toxicology at Sweden’s Uppsala University have shown that levonorgestrel can cause sterility in female frogs at concentrations not much higher than those measured in the environment. The research group is part of MistraPharma, one of the world's largest research networks focusing on pharmaceuticals and the environment.

Female frog tadpoles that lived in water containing low concentrations of levonorgestrel exhibited a greater proportion of immature ovarian egg cells. They also had no oviducts, which meant that they were sterile, since they lacked this vital anatomical component of their reproductive system.

The West African clawed frog (Xenopus tropicalis) was used for the study. It is during the tadpole stage that development of frog reproductive organs begins, with this process being governed by the hormone system. African clawed frog>>

“The findings represent important initial evidence that an environmental progestogen can adversely affect frogs,” Berg said. “The findings underscore the importance of studying how pharmaceuticals affect animals in our environment. This discovery also shows that pharmaceuticals other than estrogen can cause permanent damage to aquatic animals exposed during their early stages of life.”

The risk to wild frog populations is clear. Progestogen-induced sterility could lead to a sudden and dramatic collapse in the reproductive success of a frog population or indeed, a species, threatening its survival. In fact, by the time that the cause of the problem is discovered, it could actually be too late to reverse its effects.

This is because the physical impact on female tadpoles that have been sterilized by exposure to progestogens in this way cannot be reversed. The only long-term safeguard is for ongoing monitoring of progestogen levels in waterways that are most likely to be polluted with these hormones.