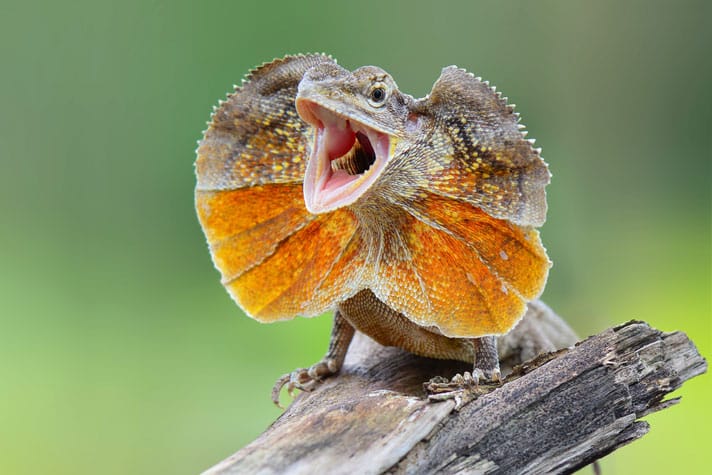 The frilled lizard is world-famous for its impressive defensive display. Keep in mind when keeping them, though, that getting your pets to do this stresses them out and is not good for their overall health.

The iconic frilled lizard’s (aka frilled dragon) intimidating “frill”—a large, colorful, circular membrane of skin that projects upward and outward—is recognized by all as a warning display that is employed when this lizard feels threatened. It serves to make a frilled lizard appear much larger and scarier than it would otherwise appear while clutching a tree trunk in vertical fashion and trying to blend in.

Also known as “frillies,” frilled lizards exist in extreme southern New Guinea and north coastal Australia. It is the second largest lizard in the family Agamidae, second only to the sailfin dragon. Male Australian frilled lizards reach approximately 3 feet in length, while New Guinea males are a bit more than 2 feet long.

I saw my first imported frilled lizards after they arrived from Indonesia around 1994. At that time, baby frilled lizards were not coming in, and adult frillies were difficult to acclimate to captivity. After several years, however, increasing numbers of babies began arriving, as well as some nice European frilled lizards of Australian lineage. By 1998 I was able to keep half of the Indonesian imports alive and successfully breed them. The babies were a breeze to keep and grow; they were not as shy, and they were aggressive feeders.

Nowadays, though they’re not extremely prevalent in the hobby, captive-bred frilled dragons can be found for sale. If acquired as fresh imports, baby frilled lizards do relatively well, but a stool check by a veterinarian is still recommended to minimize any nasties that may be present.

Male frilled lizards can attain lengths between 2 and 3 feet, while females attain two-thirds of that size.

Frilled lizards may have a captive lifespan of about 10 years. Females may be a bit shorter due to the stress of laying eggs frequently.

Frilled lizards command a large, well-planned enclosure to ensure a healthy, long life, and because they are arboreal lizards, a vertically oriented cage for adults is better than a horizontal one.

A 20-gallon “tall” aquarium is adequate for a single pair of juvenile frillies measuring 12 inches long. I recommend a visual barrier—such as by attaching cardboard or another material, painting the walls, etc.—on all sides of the tank except for one, the viewing side, as this will help provide the required feeling of security. Feeling exposed can lead to stressed-out frilled lizards that are excessively wary whenever something moves in the room where their enclosure is located. Plus,  the limited view makes it easier for them to focus on food when it is presented.

Adult enclosures can range from 4 to 6 feet tall, at least 2½ feet deep, and 5 feet long, especially if you’re raising a breeding pair or trio of frilled lizards. Dimensions can be somewhat smaller for a single adult, but remember, height is very important. The height at which a frilled lizard can bask equates to additional feelings of security.

Branches of various diameters should be placed vertically, diagonally and horizontally. Also attach a branch or shelf to the upper section of the enclosure’s rear wall. These will provide your frilled lizard(s) with plenty of comfortable perching and basking areas.

Frilled lizards are basking lizards that require a good UVB source (mercury vapor or fluorescent) and basking bulbs for heat. The basking area temperature should be around 115 degrees Fahrenheit, focused on a branch in the upper quadrant of the cage. Try not to get it too close to the branch, as frillies can easily burn the top of their frills by sitting under a hot light that’s too close for too long.

Ambient temperatures of 85 to 90 degrees should be maintained throughout the rest of cage. Nighttime temperatures should drop to somewhere between 75 and 80 degrees.

In cooler climates or during the winter, heat tape can be used to help warm the cage bottom, or ceramic heat emitters should provide the necessary ambient temperatures inside the enclosure. Please follow installation instructions carefully to prevent lizard burns and house fires.

My favorite substrate to use is a combination of coco fiber, play sand and organic potting soil with about a 2-inch depth. This substrate holds humidity well and is not dusty. Other substrates that could be used include pure cypress mulch or a commercial forest bedding.

The main diet for a pet frilled lizard should be comprised of insects, such as crickets, roaches, hornworms, silkworms, soldier fly larvae, superworms and canned grasshoppers (available in some stores that sell reptile supplies). All insects should be dusted with a quality calcium and vitamin D3 supplement. An occasional pinky or fuzzy mouse, depending on the size of the lizard, can also be offered.

I have experimented with feeding frilled lizards vegetation—sometimes it is eaten, other times it doesn’t even get touched. I place finely chopped fruits and vegetables (including squash, papaya, cantaloupe, bananas, berries, collard greens, mustard greens and carrots), along with a few superworms, into a small bowl in the enclosure.

Juvenile frilled lizards should be fed appropriately sized insects, no larger than two-thirds of their head width, up to three times a day. They should also be misted with fresh water at each feeding.

Adults will feed once a day or every two days. I supplement all of their food with a dusting of calcium and D3 at every (sometimes every other) feeding. Gravid female frilled lizards should be fed more often and provided calcium/D3 at every feeding.

In the wild, frilled lizards thrive during the rainy season, and the daily rains keep them hydrated.  An enclosure humidity of around 70 percent will keep pet frilled lizards from dehydrating.

Mist juveniles around three times a day, when feeding. Healthy adults can have a daily rain. Use a pump sprayer or misting system that provides a rain effect.

Frilled lizards drink water droplets. A shallow pan placed in the bottom of the enclosure may or may not receive much attention (though placing a heat source under it will help raise humidity levels). Usually, after a few minutes of misting/rain, a thirsty lizard will drink. I like to provide this when they are eating, as the water helps wash the insects down their gullets.

One of the first signs of dehydration is sunken eyes. Also if the skin is loose and you pinch it, and it stays pinched-looking, you have a dehydrated lizard. Give it several long showers a day,  and consider taking your pet to a veterinarian for subcutaneous rehydration injections.

Frillies are quite complacent in their enclosures and can be that way outside of them as well, but some frilled lizards do not appreciate the stress of being moved into an open area. Please do not force this on your lizard if does not seem to enjoy being outside its cage’s comfort zone. Important above all is a healthy, happy lizard in its enclosure, even if this means it will be a display animal rather than one to be handled.

A stressed frilled lizard will “frill out” with its mouth open, and it will probably hiss and may even try to bite you, or bluff –bite. A frilled lizard exhibiting its defensive display can be an amazing sight, but keep in mind that getting them to exhibit it is not good for their overall health.