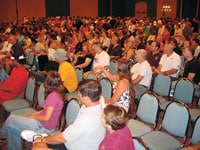 The National Reptile Breeders’ Expo raised $27,000 for the critically endangered Indian gharial in 2008.

The National Reptile Breeders’ Expo in Daytona Beach, Fla., raised $27,000 for the critically endangered Indian gharial (Gavialis gangeticus) this year. We also had our largest audience to date despite a tropical storm hanging over the city. The auction room was packed.

Considered safe after a massive captive-breeding and release campaign in the late ’70s and ’80s, the gharial has lost ground during the past eight years. Currently, fewer than 200 breeding adults are in the wild, scattered across seven sanctuaries. Expo funds are headed directly to gharial conservation programs in India, including head-start programs, habitat protection and continued investigations into the mysterious  mass deaths at the National Chambal Sanctuary.

Rom Whitaker, director of the Gharial Conservation Alliance, was ecstatic over the evening’s fundraising success. “Words cannot describe the gratitude I feel towards all who helped make this weekend such a promising one for gharial conservation,” he said. “You can do a great deal with very little money in India; fortunately, now we can do a great deal many times over with the money raised here.”

After seven years of fundraising, NRBE benefit auctions have now raised more than $121, 000 for conservation projects. It’s not just about how much money we raise but how well it’s spent. Private-sector conservation efforts are much more careful with their spending than other institutions. Funds are not to be used for travel, overhead and other expenses that do not directly benefit the species.

We thank Wayne Hill for sponsoring the auction; and all who helped, donated auction items and participated.

Hopefully the 2009 auction will benefit amphibian conservation. The previous seven auctions have all supported reptiles.