Dead mice laced with acetaminophen are being used to kill the invasive brown tree snakes in Guam. 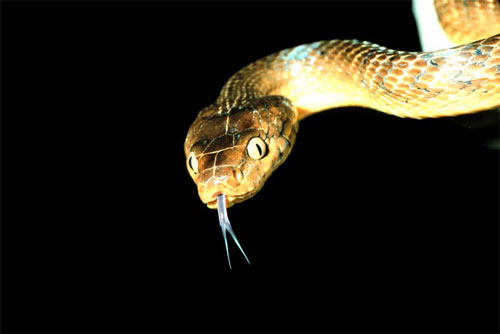 The brown tree snake, an introduced species in Guam, has practically taken over the island.

The United States Department of Agriculture, Wildlife Services, is testing out a new method to kill brown tree snakes (Boiga irregularis) in Guam. Earlier this month, dead mice laced with acetaminophen were dropped from a helicopter into the forest canopy around Naval Base Guam. The mice were attached to pieces of cardboard and paper streamers so that they would catch in the upper tree branches of the jungle canopy.

The brown tree snake, an invasive species in Guam, reportedly made its way to Guam on air or sea freight around the time of World War II. According to news sources, the brown tree snake has caused the extinction of some specied unique to Guam, and it has destroyed power lines in the country, costing Guam's power authority millions of dollars in damages.

The acetaminophen-laced mice have been fitted with radio transmitters, which will be used to track the bait and determine how effective it is. If the traps work, authorities plan to drop more of them over other parts of the island of Guam.

The airdrop strategy may prove to be more effective in killing the invasive brown tree snake than other traps have; until now, it has been difficult to plant traps in the brown tree snakes' habitat, as the jungle is nearly impossible to travel by foot or vehicle.