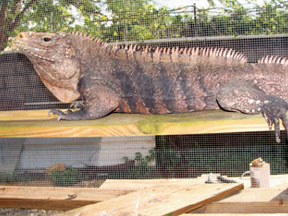 Cuban rock iguanas (Cyclura nubila nubile) are reasonably easy to breed in captivity. Sexual maturity is reached at the age of 4 to 6 years and at a length of 3 to 4 feet long. To breed them, first you need a compatible pair of adults.

Male Cyclura have two large hemipenal bulges below the cloaca on the ventral side of the tail’s base. Lizards, like snakes, have hemipenes. When breeding, the inside of the hemipenes become the outside. To understand this statement, think of taking your gloves off by pulling from the wrist only. Your glove then would be inside out. This is how a hemipene is extruded.

Additionally, male Cuban rock iguanas have large, femoral pores located on the inside of the thigh on their hind legs. During breeding season, males secrete a waxy exudate that resembles and feels like a really skinny candle. They drag their hind legs during breeding season, marking their territory with this exudate. Female lizards have femoral pores as well, but they are much smaller and do not secrete an exudate. Needless to say, females do not have hemipenal bulges. 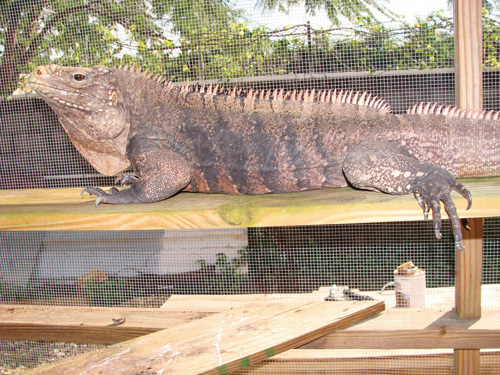 Provide your iguana with various barriers and shelves so that females have a place to retreat from males.

To breed Cuban rock iguanas, I suggest an enclosure that is at least 12 feet long, 4 feet wide and 6 feet tall. Inside should be basking spots large enough to comfortably accommodate the entire lizard, visual barriers and a night retreat which could double as a nesting box.

Spermatogenesis happens in male rock iguanas in the last week in March and lasts until early June. During this time, males have elevated testosterone levels, and it is then that a formerly tame pet might bite the hand that feeds its. It is also at this time that the male will begin courtship. Usually he will look at the female and do several open-mouthed, rapid head bobs, and the female usually will run away from him. The male will chase the female until he catches her.

Copulation takes place with the male biting the nape of the female’s neck and twisting his body to one side and underneath hers. Earlier in this article I suggested that one equip the cage with visual barriers. The reason for this is that males in nature generally have a harem of several females living within their territory, but in a captive setting they are usually paired with just a single female. During breeding season, the male will continually chase and attempt to breed the female. Sometimes a male has been known to physically damage a female if she cannot escape. Many times the male will grab the female in his powerful jaws on almost any part of the body to slow her down or hold her in place. It is not a good idea to separate them when this happens, as trying to do so only makes the males more aggressive in their breeding attempts.

I place shelves at different heights on the enclosure’s sides. These are effective visual barriers and also allow the dominant male to sit on the highest one and demonstrate to the world who is “king” of the cage. They also allow the female some relief from the male’s amorous advances. The female can use these ledges to hide from the male. The old saying of “out of sight, out of mind“ holds true.

I have found that it is better to keep a breeding pair of lizards together on a year-round basis than to introduce them only during breeding season. There is some evidence to show that these lizards may pair bond with each other, and changing males and females is not recommended to ensure successful breeding.

After copulation has occurred (sometimes many times), the female searches for a suitable nesting site. Its nighttime retreat could double as a nesting box. I have had females successfully nest in boxes as small as 4 feet long, 2 feet wide and 2 feet tall. Make a hinged top and also cut an entrance hole near the top that is slightly larger than the iguana’s widest point. Fill the box about 18 inches deep with a nesting soil of some type. I use a mix of potting soil and sand. This allows the lizard to dig a burrow or hole for nesting; the soil holds its shape and doesn’t cave in.

For a week or two before egg deposition you will notice your female digging test holes in the box. Finally, your iguana will lay between four and 18 eggs, depending on her size and age. The older and bigger the lizard is, the more eggs she will lay. You will know when egg deposition has occurred because your once big-bellied lizard will look emaciated. Additionally, she will attack the male or even you if you approach the nest box.

To collect the eggs, I use a large fish net to secure the female, and then I dig the eggs up by hand. Cyclura eggs are oblong shaped and about the size of a chicken egg. The shell is leathery in composition. It is best to mark the top of the egg in the same position you find them in the nest.

After marking the eggs, I place them in dry perlite in an 11-quart shoe box without a top. I then place this smaller box inside a larger plastic box filled with an inch or two of water. This is called a “float,” and it may be accomplished in many different ways. The reason for this is because you need adequate humidity but the eggs cannot be wet. I have seen people place eggs on plastic grating over the water, which is essentially the same thing. I cover the big box, but leave the top open on the smaller box containing the eggs. I incubate the eggs at about 87 degrees Fahrenheit, although any temperature between 86 and 89 will be successful.

Cuban rock iguanas hatch in about 60 to 67 days, depending on the incubation temperatures. The higher the temperature, the quicker the eggs will hatch. Neonate Cuban rock iguanas average about 12 inches long in size. Once they pip, let them emerge from the egg on their own. They need enough time to absorb all of the egg yolk sac.

I offer food seven to 10 days after hatching. Cyclura are not like snakes that usually need to shed before feeding. I feed neonates a mix of soft lettuces such as romaine, radicchio, bibb and other similar veggies. Stay away from iceberg lettuce as it has little nutrition.

I house four neonates together in indoor/outdoor enclosures that are 4 feet long, 2 feet wide and 2 feet tall. They could also be kept in a 20-gallon long indoor tank. I try to raise them together for as long as possible, but I monitor grown rates and feeding and watch for any compatibility issues. If at the point any individual is not thriving, it must be separated or over time will likely perish.