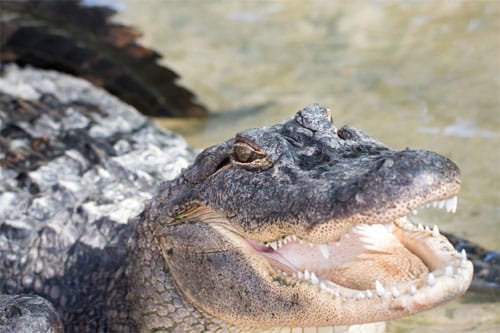 Evidence reveals that crocodiles have diverse ancestry and may not be the "living fossils" that some believe them to be.

A recent article in the Journal of Vertebrate Paleontology reveals that crocodiles and alligators come from an incredibly diverse group of crocodyliforms that lived millions of years ago, and that they are not the unchanging "living fossils" many believe them to be.

According to the article, there have been recent fossil discoveries of crocodyliforms that do not conform to crocodile norms (conical teeth, long snouts, strong jaws and long tails). One such crocodyliform is Simosuchus clarki, which lived in Madagascar about 66 million years ago, at the end of the Age of Dinosaurs.

Simosuchus clarki had a blunt snout, leaf-shaped teeth and a stubby, well-armored body. Since the discovery of S. clarki's skull and partial skeleton a decade ago, enough skulls and skeletons have been recovered from Madagascar to represent nearly every bone of the crocodyliform, according to the article, and it has become the subject of a newly published Memoir of the Society of Vertebrate Paleontology.

According to the article, the stocky, short-tailed, 2-foot-long crocodyliform was not capable of snatching animal prey from the edge of water bodies, as many modern crocodiles do. In fact, S. clarki's short, underslung jaw and weak teeth indicate that it was probably a plant eater.